A lot of people are turning vegan nowadays. Aside from its health benefits, many people turn into vegan as a form of lifestyle change.

Why choose to be vegan?

Some people who choose to live a vegan lifestyle also avoid clothes, skincare, and other products that contain parts of animals like leather or fur.

For some, being vegan is a form of a sustainable diet. It helps our environment, in a way, since, according to studies, vegan and vegetarian diets are the greatest contributors to the reduction of land use and greenhouse gas emissions. It was also said that vegetarians use the least water.

To differentiate, a vegetarian diet includes not eating meat but consuming dairy products and/or eggs, or both, while a vegan diet excludes all ingredients that contain parts of animals.

Health benefits of the vegan diet

If you are someone starting the vegan diet or want to start one, it is best to know the benefits you will get from it. Here are some health benefits of having a vegan diet:

Moreover, those that are on a vegan diet take in fewer calories than other standard diets. Having a moderate calorie intake leads to lower body mass index and decreased obesity risk, a major factor for heart disease.

Plant-based foods are high in fiber, vitamins, and phytochemicals (active compounds in plants). These protect against cancer. On the other hand, processed and red meat are known to cause colorectal cancer. Eliminating these from your diet eliminates possible cancer risks.

People on a vegan diet have a higher tendency to have a lower body mass index than their other diet counterparts.

It is also reported that a vegan diet provides better macronutrients and is more effective for weight loss than omnivorous, semi-vegetarian, and pesco-vegetarian diets. However, you must control eating processed or high fat plant-based vegan food products because it can lead to unhealthy weight gain. 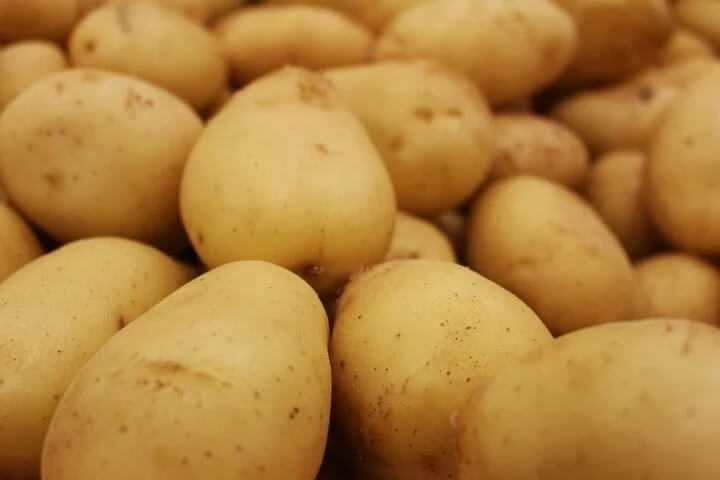 Why include potatoes in your vegan diet? Great news for potato lovers; potatoes, just like a vegan diet, have many health benefits.

When it comes to its nutrition facts, potatoes have less to almost no fat and relatively low calories. It is also rich in protein and has vital nutrients and vitamins such as vitamin C, vitamin B, potassium, and many more. If you include the potato’s skin, it is also rich in fiber, which is good for digestion.

A salad is a classic go-to healthy diet food, and mixing potatoes on your vegan salad will make it more awesome! It’s also easy to do, and you can make it for just less than 15 minutes. There are many recipes for potato salad for vegans that you could explore, such as Pesto Potato Salad, Vegan German Potato Salad, the classic Vegan potato salad, and many more. It’s also a perfect side dish on just about anything or an appetizer to kick start your meal.

This is also a perfect side dish for just about anything, from fish to burgers, or you can have it for a snack. It’s also something you’ll eat while hanging out with your friends or family or while watching a show or a movie. It’s nice when it’s crispy on the outside and soft on the inside, and if it’s perfectly seasoned.

This is perfect when it is creamy and perfect for cozy weather. You load it up with toppings, and it’s going to be a winner. Coconut bacon, vegan sour cream, green onions or chives, and sliced orange pepper are the best toppings to include in your vegan potato soup.

Home-based fries can be healthy and delicious at the same time. You can opt to bake the fries instead of frying them. It makes the fries crispy on the outside and tender on the inside. You can bake it to perfection using olive oil, a lot of black pepper, and a perfect seasoning blend; these include smoked paprika, garlic powder, black pepper, and salt.

A perfectly cooked and creamy mashed potato can clearly be done without the cream, cheese, and butter and can be 100% plant-based. You will love its light and fluffy texture.

To do this, you have to choose the yellow potatoes. It has a butter-like flavor that will compensate for the lack of dairy. Mixing coconut oil and olive oil is also a good idea. The coconut oil will add a certain creaminess and sweetness that the olive oil lacks.

You can serve this with vegan gravy or vegan meatballs and sprinkle with chives, vegan sour cream, and mushroom bacon.

If you are fond of foods with creamy and cheesy sauce, this vegan potato recipe is for you.

The ingredients you will have to prepare for this are vegan butter, flour, salt, black pepper, plant-based milk, vegan cheddar shreds, potatoes, and onions.

This recipe features thinly-sliced potatoes baked in perfection with a creamy, savory, and delicious sauce.

These recipes show that a healthy lifestyle is also about how you prepare your food. So, forget about fried potatoes and add these vegan potato recipes to your vegan lifestyle!

Danor Aliz
Danor Aliz is a lifestyle journalist who enjoys writing about everything luxury. Her favorite subjects are luxury travel and everything that has to do with fashion. In her spare time, she loves to paint and also enjoys her time walking her dog Daisy.
Previous articleHeal Your Home With These Stunning Hacks
Next articleHow to Easily Get Paid While Working Online

Many wonder whether betting is a popular activity in today’s world. After all, new forms of entertainment and things that compete for our time...

When it comes to finding the ideal luxury destination in the Caribbean, few locations compare to Antigua and Barbuda. Ambassador Dario Item speaks about...