A futuristic mosaic of culture, art, and middle eastern charm, Abu Dhabi’s golden ambiance amalgamates with rich surroundings, to tempt any discerning traveler. Mexican designers Aidia Studio are pioneers in experimental design, piquing curiosity with their dynamic urbanism and creative disciplines. Aidia architects Rolando Rodriguez Leal and Natalia Wrzask are at the helm, and although in its inception, this project conjures up a hypnotizing marvel of creativity.

Nestled within the Rub’ al Khali desert is an apparition that appears to capture the mind with a revolutionary depiction of arenaceous panache. These arrive in the form of 25 luxury hotel pods with collapsible shells, a cutting-edge design that melts effortlessly into the dry dunes. Named the Oculus, they feature distinguished domes, reminiscent of a Mosque apex. The curvilinear structure offers a panoramic spectacle, delving into the depths of its surroundings. The exterior double-glazed domes present each visitor with shading, temperature control, and camouflage, allowing optimum privacy and immersive experience. The dome’s structure is formed with sixty shading panels; an opaque filigree forges a deeper layer of protection. There is no denying the stimulating intentions of its design; Aidia specifies that the inspiration was harnessed from the desert’s unforgiving mural. Cacti species in the Rub’ al Khali desert inspired the outer layer of each pod; thick scooped leaves, diversified with a quilted texture, regulate temperature, and eradicate solar radiation. As these panels ascend, they densify to modulate vertical sun radiation in the soaring summer months. You can observe ferocious sandstorms from a comfortable, safe, and luxurious sanctuary. 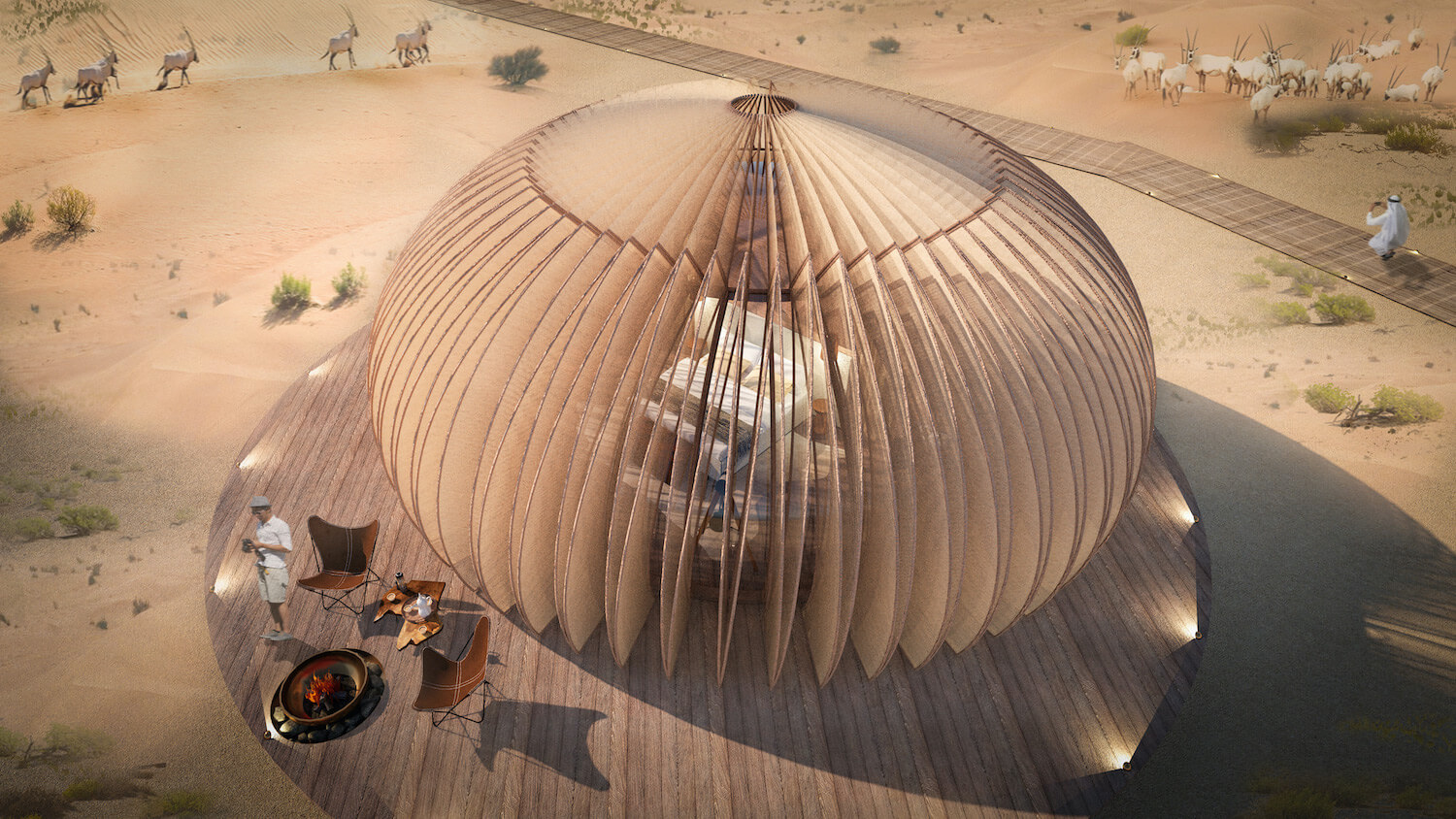 This development is a testament to contemporary experimental designing. It encapsulates science and style, style and substance that is reciprocated by the pleasure of all visitors. This area of Abu Dhabi had long been an obscure territory, in the South Arabian desert. As it climbs to unforeseeable heights, the Oculus can divulge both its secrets and aesthetic to humanity. The retractable windows allow a surge of light at all times of the day and create a hotspot for nature observation. The size of the pods will vary from 50m² and VIP pods that stand at around 80m² in size.

“The cabin is grounded through thirty adjustable pillars allowing installation in different ground conditions. The construction process should be quick and with minimal disturbance to the natural environment,” says Aidia Studio. 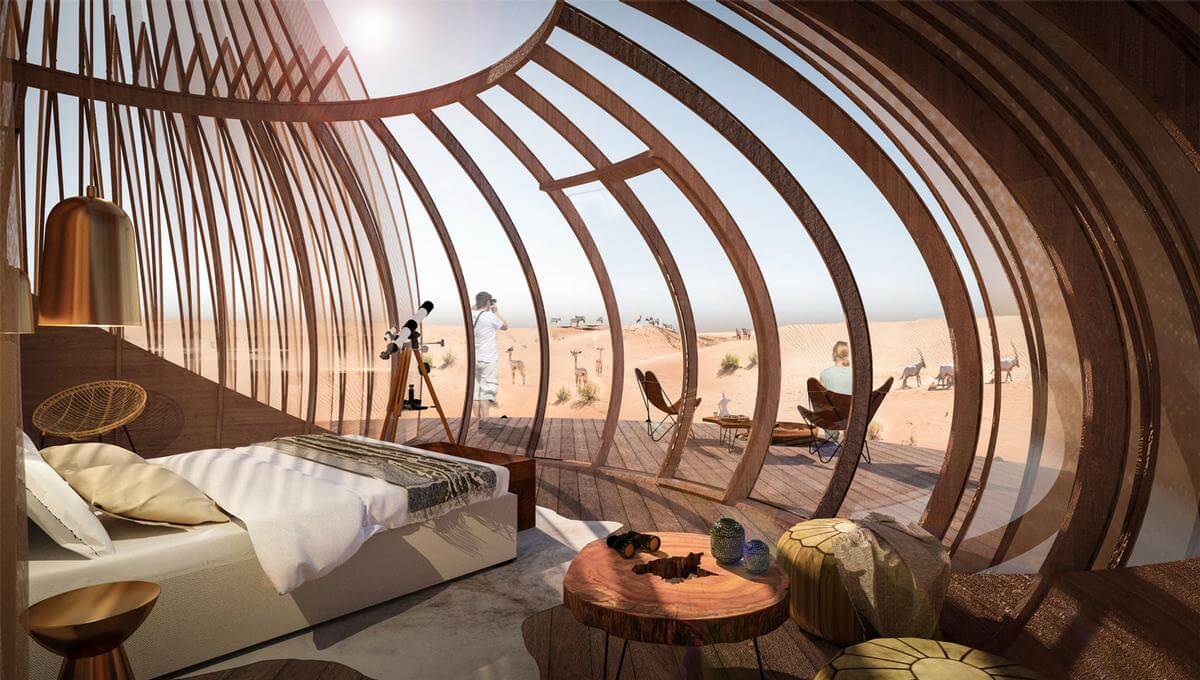 Conservation at the core

Sustainability is a topic of conversation that reaches the desks of many architectural designers as we approach a green revolution. Geologist Kenneth W Glennie recently highlighted the changes occurring within the desert due to global warming. In the coming years, the return of “the ideal conditions of the Climatic Optimum” may become a reality, but how this will affect the dry, desolate land is yet to be seen. Therefore, Aidia has formulated unprecedented environmentally-friendly features. Some of these include flexible dye-sensitized solar cells, which are sewn into the shading fabric. In addition to this, Aidia has acknowledged the very nucleus of which the hotel will operate – its energy supply. Electrodes will supply the power, and water tanks will filter and recycle used water, which aligns with modern standards for sustainability. A concomitant theory that shall be implemented across all areas of its design. Minimal disruption to the environment means that no habitual wildlife will be affected. 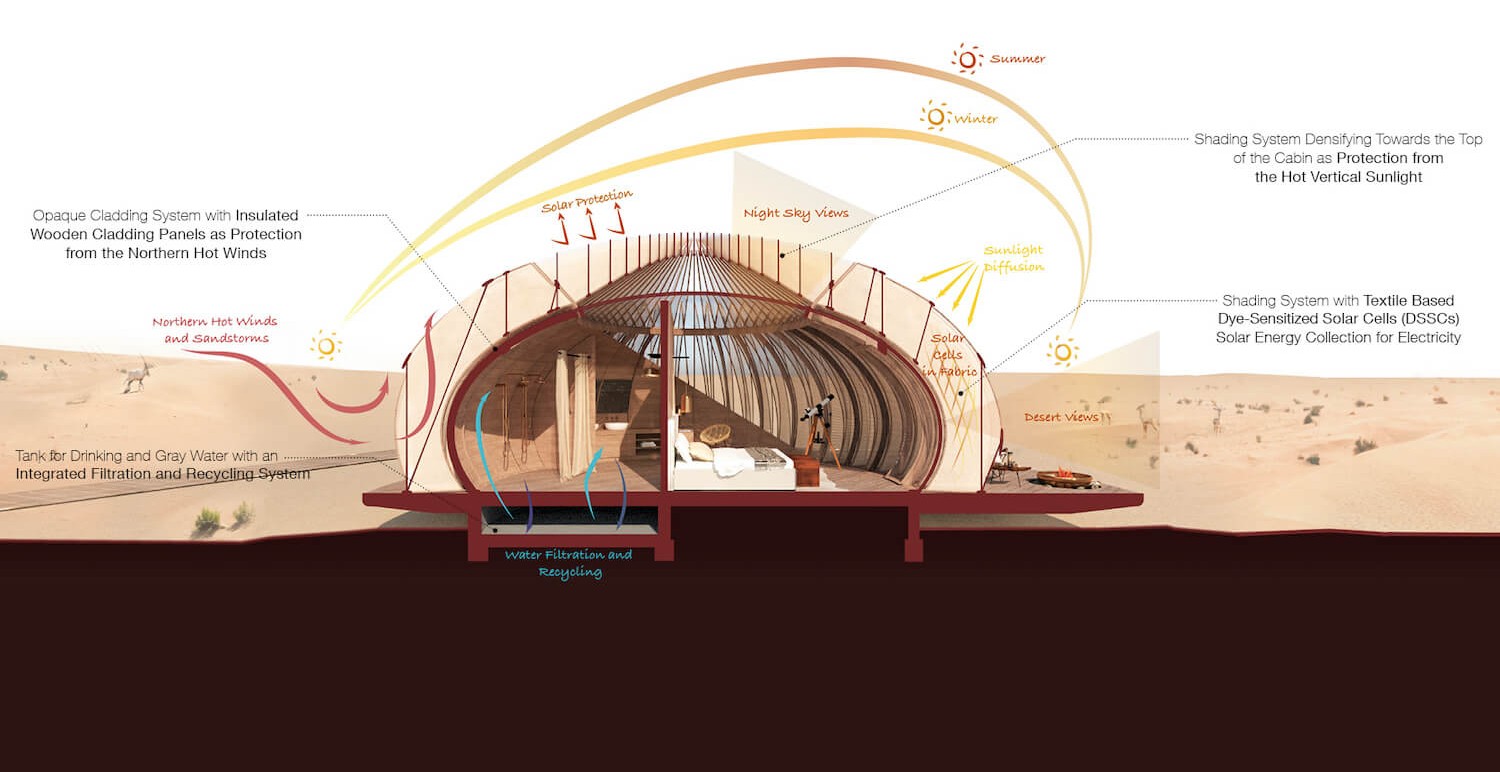 Not only is its architectural composition enamors, but rather the scientific theories behind this project are equally as seducing. The Oculus complex harmonizes with ethereal intrigue, as each cabin is strategically positioned to mirror a constellation. You can peer into the speculum of divinity as you grapple with the fascination of this novel construction.

At the heart of the Oculus are four larger-scale pods that house a number of things, such as reception lounges, restaurants, and a kitchen, which will form part of the main hub. Transition sleeves will be interconnected with an elevated outdoor deck for accessibility and easy transportation. The interiors will reflect the voracious milieu, with a spectrum of neutral certified woods and the congenial addition of organic fabrics. The palette of neutral tones coalesces blissfully with the achromatic dunes of the Rub’ al Khali desert. Rustic tones add richness to the interiors, optimizing luxury. A modern charm that places the desert onto the map with this imposing yet enticing structure. A design that not only morphs into its backdrop but that spearheads the proposal of green architecture in its conceptual sketches. The construction is likely to begin next year and an opening in the not too distant future. The beginning of an alluring adventure for both the middle east and Aidia. A luxurious development that is likely to stimulate both intrigue and conversation in the world of architecture and travel. A well deserved treat to the tourism industry as we enter the ‘new normal’ of travel.

Jennifer Durrans
I have been a freelance Copywriter and Digital Strategist for over seven years. Beginning my journey in the UK, I have worked as an editor for an online luxury platform and began to write for a number of other online and print luxury publications for global clients. I have also launched my own digital strategy business, advising high-end brands on developing their online presence further. I have a keen interest in the ever-changing world of real estate, interior design, and travel, providing custom editorial for these industry niches. I am a keen traveler, and draw inspiration from every place I visit.
Previous articleOne Steuart Lane, San Francisco’s Ultra-Luxury Waterfront Condominium
Next articleDecor Essentials That Will Instantly Enhance the Look of Your Home