Alfa Romeo’s Giulia Quadrifoglio should be in the next James Bond film. Not in some bit part—central casting should bump Aston Martin and give it the lead.

That’s what tech, digitization, and clever engineering can infuse into an automobile these days. 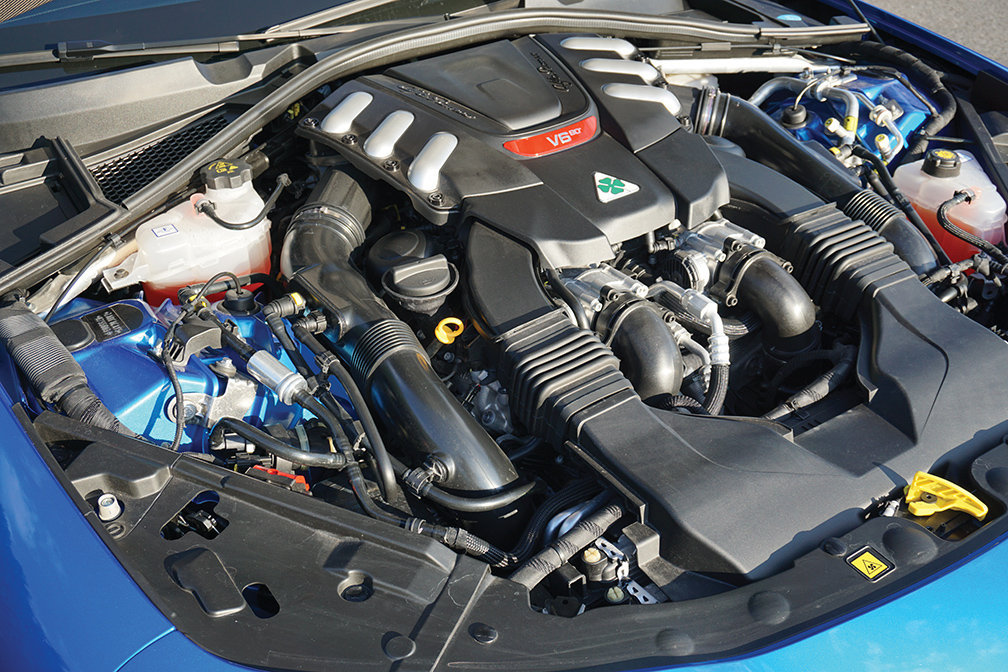 To get there Alfa Romeo enhanced its Giulia base model. The Turin based manufacturer adorned it with the company’s legacy racing emblem—the four-leaf clover (or Quadrifoglio in Italian)—and added an all-aluminum, 505 horsepower twin-turbo V-6 engine that delivers 443 foot pounds of torque.

The 3800 pound rear-wheel drive car puts power to pavement through an 8 speed automatic transmission and 11 inch wide Pirelli skins. Drivers have the option of passive auto or banging out gears on paddle shifters or the mid-console stick.

On the tame end of the spectrum, Advanced Efficiency mode curbs the engine for maximum fuel consumption and optimizes electronic stability control systems (EST and ASR) for safety. Natural mode is the comfort setting for daily driving. 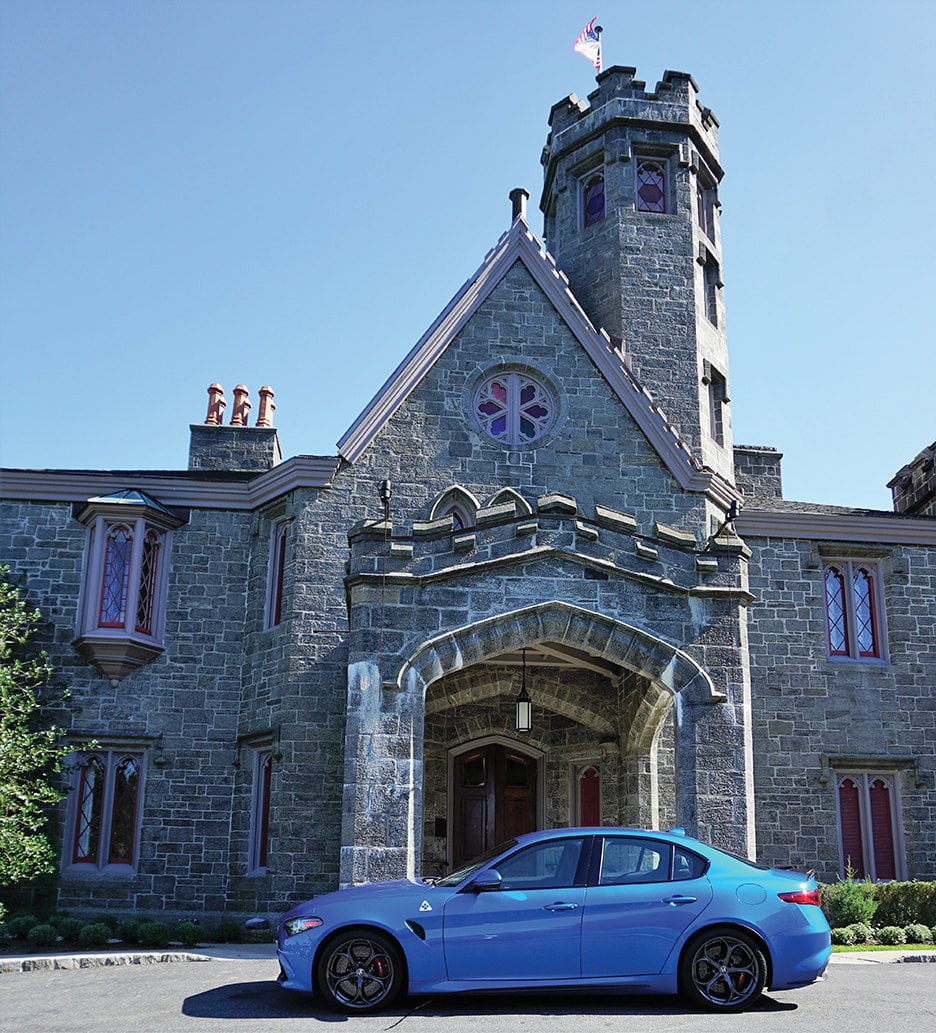 And then there’s that last setting on the dial: Race mode. This is the option that belongs in a 007 chase scene. One where Bond flicks a switch, floors it, and drops a pack pursuing assassins in lesser performance cars.

Alfa Romeo’s description for Race mode is that it “activates the over-boost function, opens up the two-mode exhaust…and delivers sharper brake and steering feel with more aggressive engine, transmission, and throttle…”

From a driver’s perspective, when you click into the mode it transforms the entire car into a track craving beast. The Giulia Quadrifoglio instantly growls, grips harder, and feels energized. 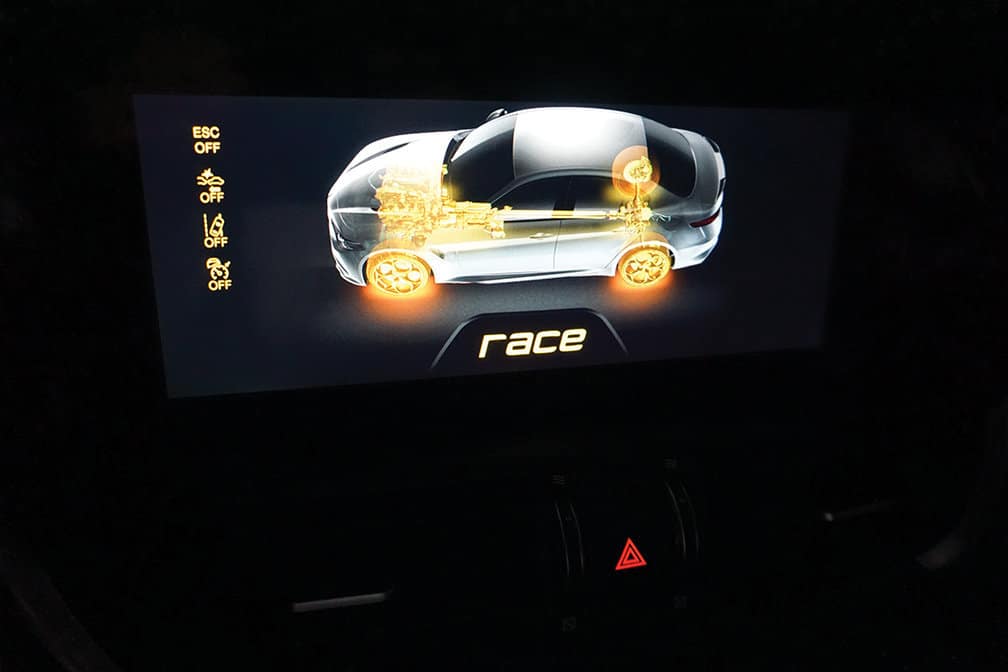 From acceleration, to steering, to braking the responsiveness of the vehicle is immediate, aggressive, and tight. A nudge on the pedal thrusts you back in the seat. Stomp on it off a light, nail the brakes, or crank the wheel laterally and the Quadrifoglio’s full performance stats come to life: 0-60 in 3.7 seconds, high 11 quarters, 191 mph top speed, 1G corners, and 60 to 0 in 99 feet—according to Alfa Romeo and reviews.

On public streets, the Quadrifoglio dialed in Race mode is both exhilarating and a bit scary. Hammer the pedal and the Alfa Romeo’s exhaust screams and turbos pop. From a standing stop the car hits 80 mph in several eye blinks. On the highway, 75 becomes 120 before you know it. I throttled and threw the car into some tight corners expecting it (and me) to sway or fishtail. It didn’t. The Giulia Q turned on a dime and accelerated forward. 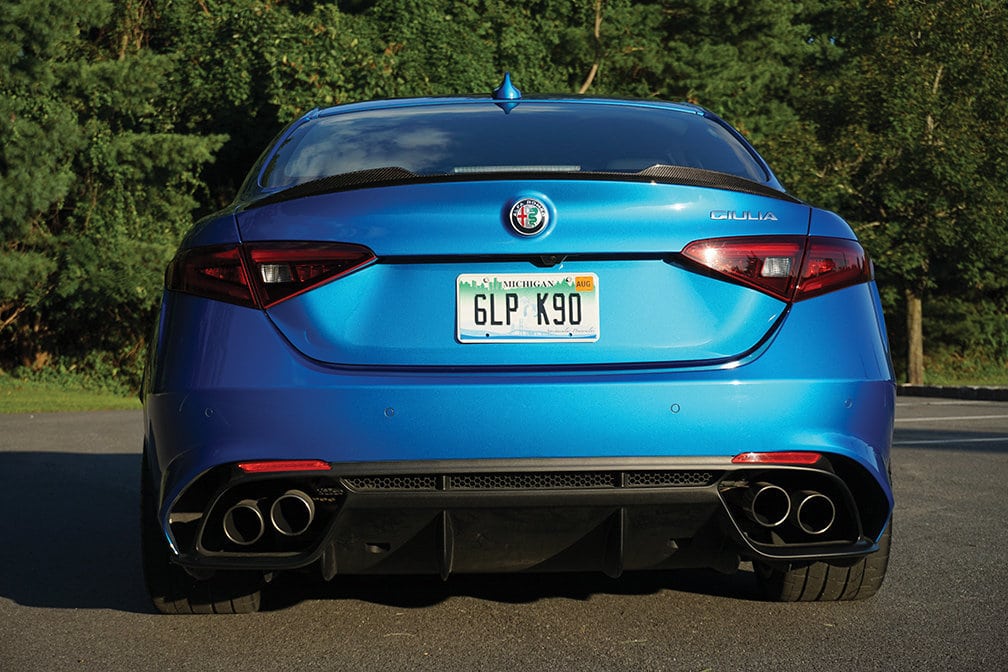 The only offset to the thrill of this car’s peak performance is the fear of flashing lights and massive tickets. And that’s the great thing about Alfa Romeo’s Giulia Quadrifoglio versus a full on super-car. If Race mode becomes too much, just turn it off.

Turn the DNA knob back to N or A and in tenths of a second your back to driving a four-door sport sedan with hooks for a baby-seat in the rear.

That a car with this performance level is also a realistic daily driver is pretty remarkable. 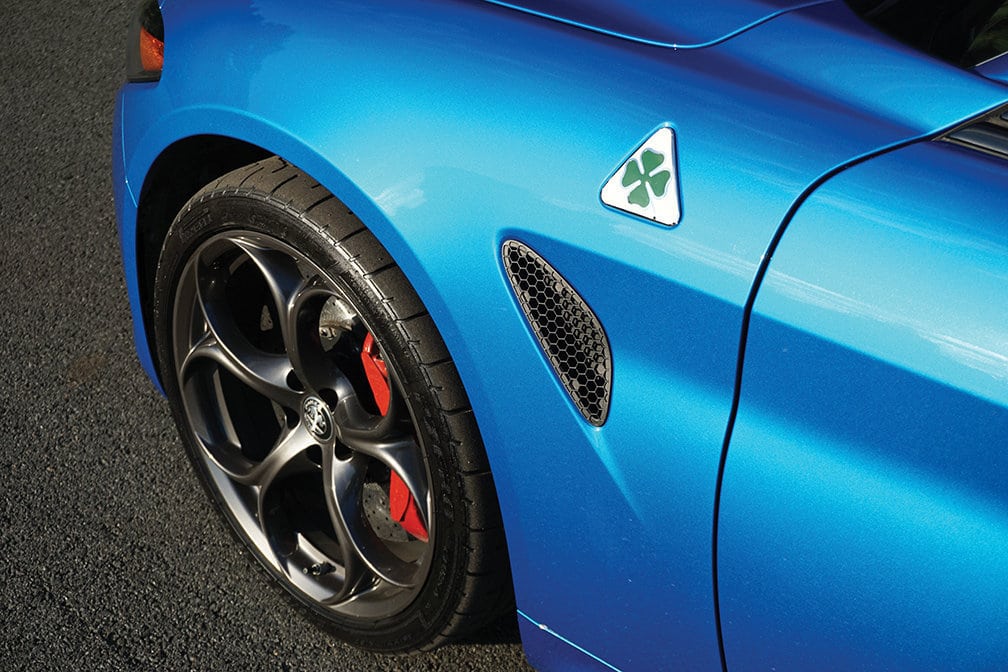 In addition to testing the Quadrifoglio’s speed credentials, I dialed it down and used it as a grocery getter, around-towner, and actually did strap in a car-seat for daycare drop-off and pickup. It was all doable and realistic.

The Quadrifoglio’s other tech—8.8 inch widescreen, GPS and infotainment system, and 360 degree airbags, parking and blindspot sensors—enhance the car’s versatility and safety.

As for gripes, or things I’d change, there’s not much. As a 6,2” guy, the windshield integrated housing around the Electrochromic rear-view mirror was a bit vision impeding. Perhaps Alfa Romeo could engineer it up into the roof for us taller folks. 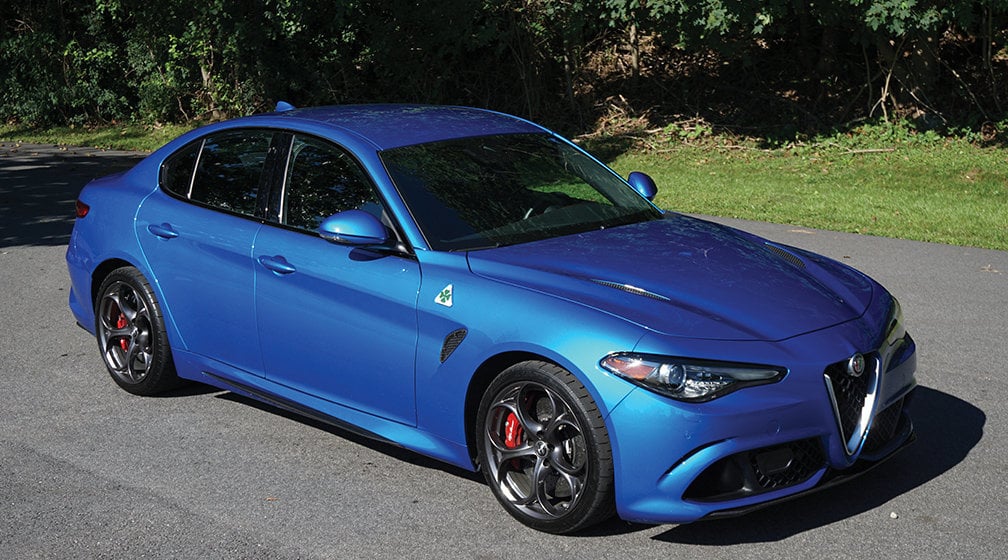 Final takes on Alfa Romeo’s Giulia Quadrifoglio? The $80,000 car could fall into a category of its own—somewhere between its luxury sport sedan peers such as BMW’s M3 and Cadillac’s ATS and full on supercars.

This is probably why the 2018 Italian four-door received 5 stars from Car and Driver and Car of the Year accolades from Motor Trend.

Sport sedans like the Giulia Quadrifoglio and Audi’s RS 3 could start putting pressure on expectations for supercars. On performance stats and acceleration, the Alfa Romeo’s only hundredths back some of the most desired exotics for hundreds of thousands of dollars less.

So if you want an exotic sport sedan that’s faster than its peers—is a realistic daily-driver, track and autocross machine—and that touches supercar performance for a fraction of the cost, the Giulia Quadrifoglio may be your good luck charm.