Chef Sinicropi of the Grand Hyatt’s signature restaurant, La Palme d’Or, is to cooking what Chagall was to painting. Audacious and provocative, but festive and colorful, the creativity of this two-star Michelin rated chef shows not only in his cuisine, but in his dishes as well – literally the dishes.

Each course of the meal is served on a specially designed ceramic dish or platter designed by the chef and his wife. My favorite was the hollowed out tree with ants crawling up the trunk where desserts were perched on the branches, followed closely by the red and white striped circus-themed tent appetizer holder. The serving pieces added a whimsical touch to an incredible meal.

The act of eating a meal, according to chef Sinicropi, is not a passive pleasure. He requires the diners to become part of his movement of organized chaos.

Squid bread seemed like the perfect place to start my meal by the sea in Cannes. Next came the fried ravioli of Comté cheese, black olive and chocolate “amuse-bouchés” that were light and flavorful.

Checking in with me between courses the chef asked me to follow along the culinary AMNIS or MOVING WATER journey from a simple taste of a fresh raw oyster to a more evolved bite when combined with a powerful citrus punch from the local Menton village lemons and another with béarnaise sauce with shallots and vinegar. Finally, the oyster course reached its conclusion atop brioche bread with smoked sea urchin tongue, accompanied by duck foie gras cooked in sea salt and seasoned with citrus zest.

And so it went with the rest of the courses chef Sinicropi created and executed. He opened my mind and forced me to think before I ate and awakened taste buds I did not previously know existed.

The cheese course was spectacular due to the array of aged cheeses matured by the famous Provence frommage celeb, Madame Josiane Déal.

The masterpiece of a meal drew near the end, but not without two dessert courses. The pre-dessert was a tower of treats consisting of chocolates and fluffy Meringues of different flavors. Last, but not least, I was served some sweetness and elegance to end the meal. Eye candy – the crispy outer shell looked like something from outer space that surrounded an icy mango treat that made my mouth pucker just a tad, while a hint of jasmine subtly played on my lips. 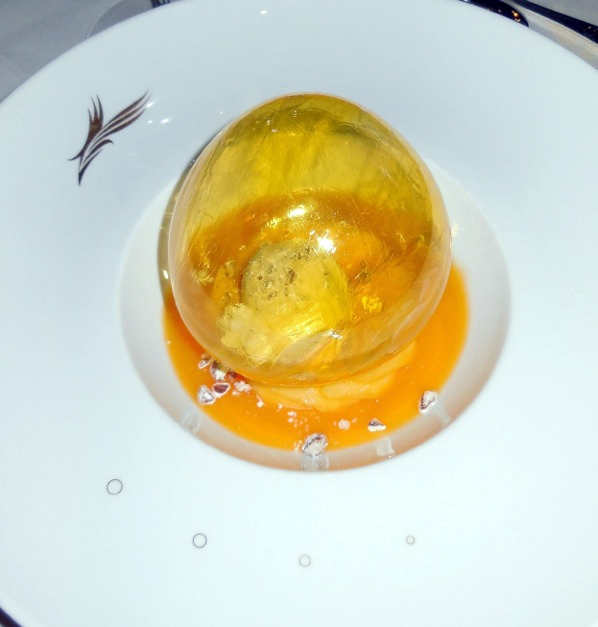 No coffee needed; after the meal at La Palme d’Or I was wide-awake with excitement and my taste buds did not want to erase the magic they had tasted all night long in one of the most artistic and ambitious kitchens in France.

Thank you to chef Christian Sinicropi and the Grand Hyatt, Cannes for an outstanding dining experience.

Priscilla Pilon
Priscilla Pilon travels the world but is an admitted Paris addict. She began her career as a food/travel writer and photographer through her own personal trips and her time spent living and working abroad. A true travel chameleon, she can find herself skiing in the French Alps one day and snorkeling in the British Virgin Islands the next. A wife and mother of two grown boys, Priscilla sees travel as art – a blank canvas where unique hotels and experiences paint priceless pictures. Born and raised on the South Shore of Boston, she now splits her time between Newport, Rhode Island, Key Largo, Florida, and Boston’s North End. She is an avid photographer, sailor (Oyster 54), tennis player, skier, foodie, and amateur sommelier.
Previous articleCOCOON YOURSELF AT THE MANDARIN ORIENTAL ATLANTA HOTEL & SPA
Next articleONE BAL HARBOUR