COVID surely cannot stop fashion going forward, and Coperni’s Fall-winter 2021 collection has proved just that! The co-founders Sébastien Meyer and Arnaud Vaillant presented their fall collection despite the curfew timings in Paris by staging a drive-in fashion show.  The guests were picked up in 36 electric cars and taken to the Accor Accord Arena in Bercy, the 12th arrondissement of the City of Light – an enormous stadium for the guests to watch the Fall collection from the comfort of their back seats. The brand partnered with DS Automobiles for their latest Paris Fashion Week show. 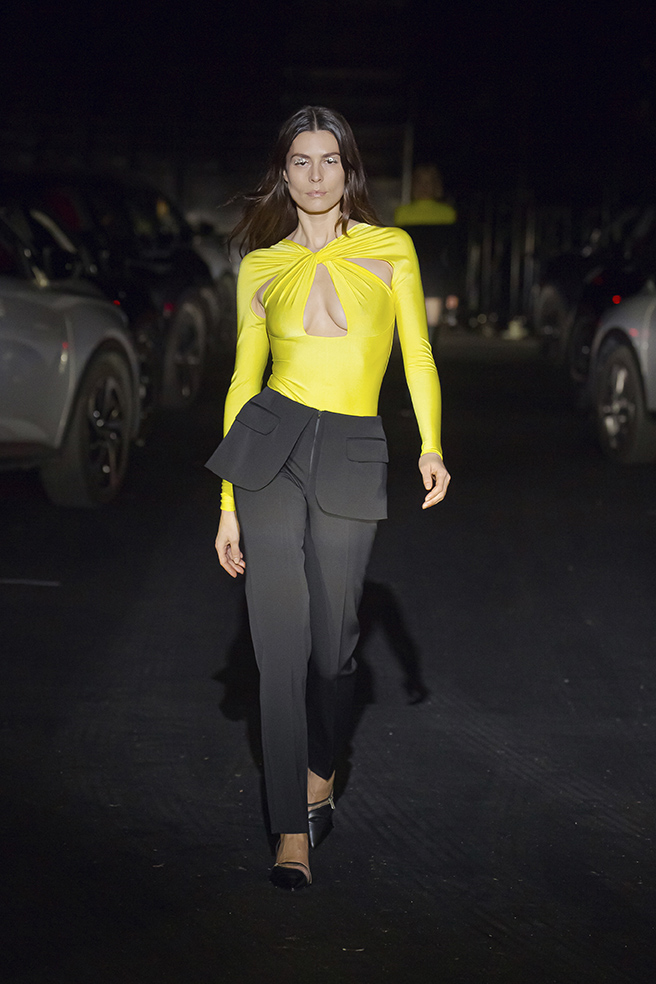 Each vehicle navigated the streets of Paris before arriving in the hall. The drivers used their headlights to illuminate models walking down between them. The socially distanced guests enjoyed champagne while watching the collection from the car window of the tech-savvy Citroen cars as the models walked. The show was also hosted for its virtual viewers via an Instagram Livestream, which gave an even more comprehensive view right from the live feed backstage to a POV video of a guest member. 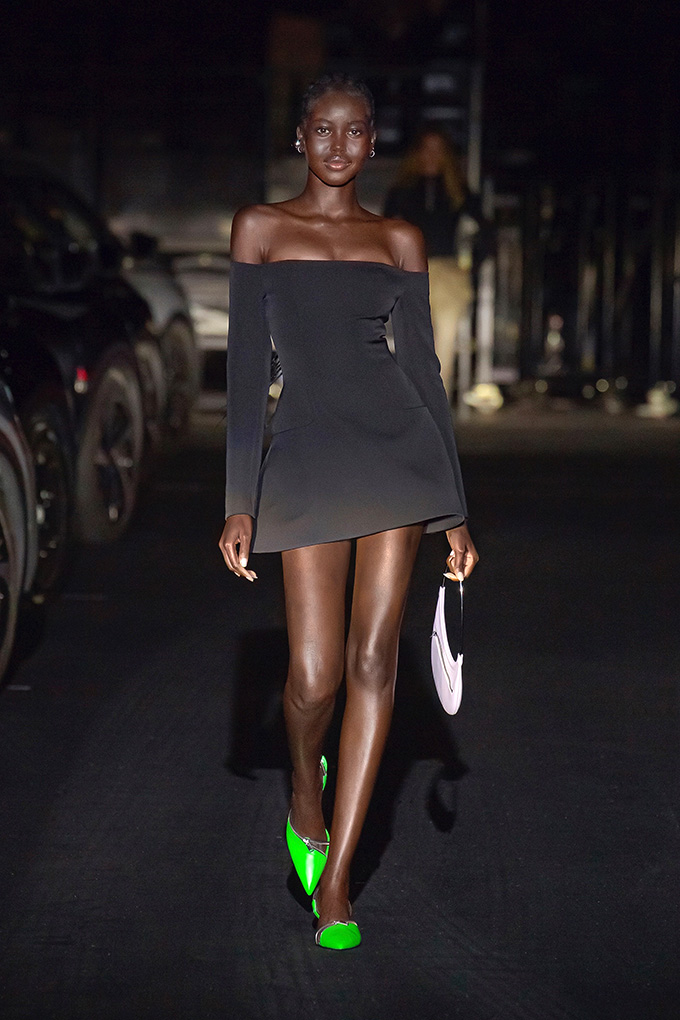 The designers have been bringing out technological innovation within their designs, and both have agreed in an interview that looks at Steve Jobs as their mentor. However, ditching their regular, efficient, athleticism minimalism, the Fall/Winter 21 collection showcases a different side of the designer duo. Adut Akech opened the show in an off-the-shoulder A-line minidress, while Mica Argañaraz closed it in a see-through painted lace shift. 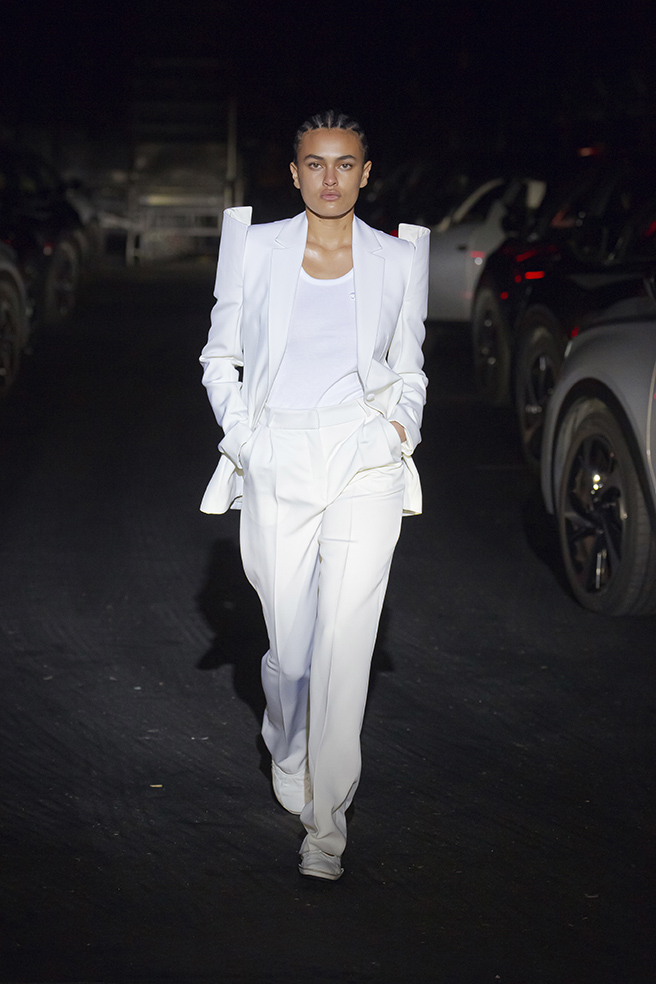 The Winter 21 collection is an exploration into the complexity and the mystery of night-time as we know it: sometimes pitch-black, sometimes dotted with stars, sometimes illuminated by the moon. “The theme of this collection is the night we have been missing for a year, seduction, party,” Sébastien Meyer told AFP before the parade. The American-style drive-in concept was chosen to “enrich the parade” and create a “total experience” as part of the Parisian women’s ready-to-wear week. 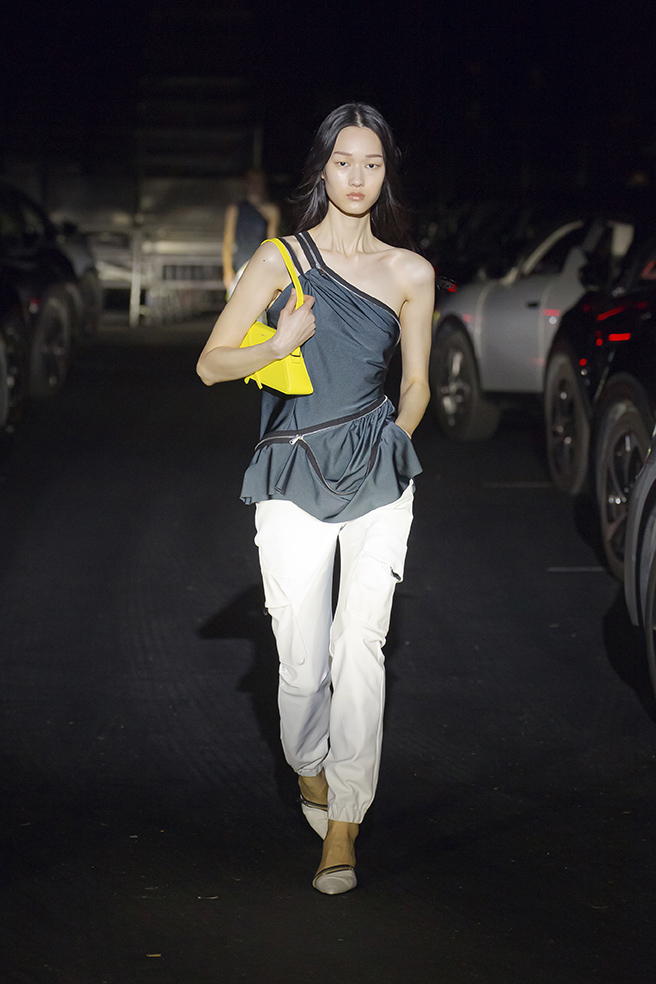 Describing the collection further, the duo said in a statement, “It is an exploration into the complexity and the mystery of nighttime as we know it: sometimes pitch-black, sometimes dotted with stars, sometimes illuminated by the moon. The night-time of celebration, of seduction and of plunging into the unknown as opposed to the nighttime of sleep, of resting our bodies and allowing dreams to take over our mind and our soul.” 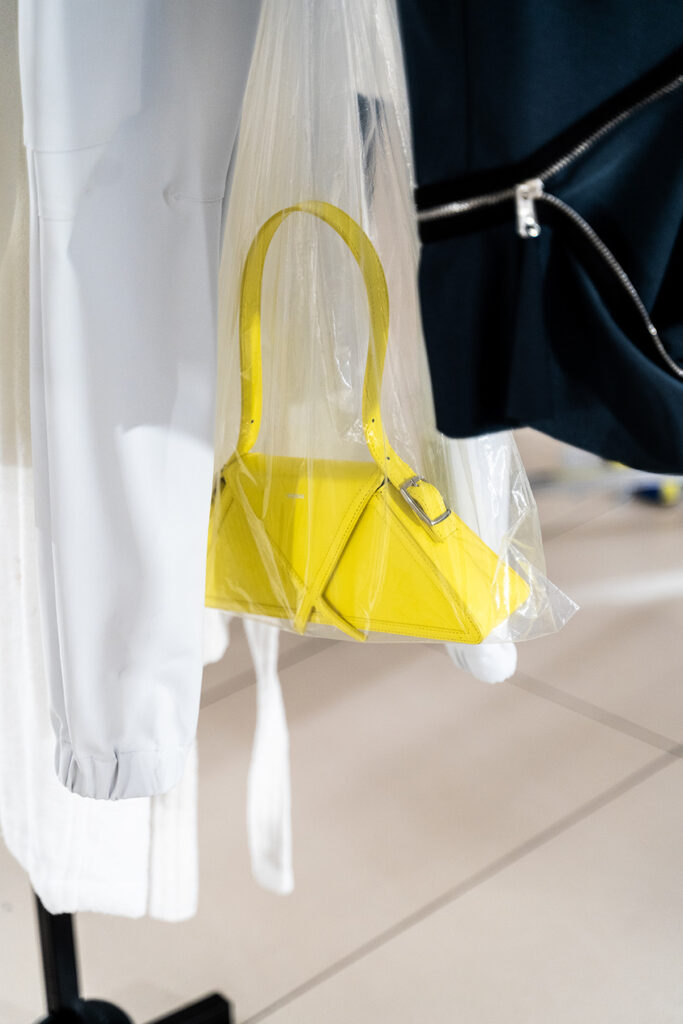 Sébastien Meyer further explains, “We have been living in comfortable clothes for a year, with a lot of pajamas, we let ourselves go a little. We wanted it to shine, that it gives pleasure, to sell the dream a little.” Hence “the codes of the night, lace, faux fur, sequins,” he adds. Frank and dynamic cuts on classic silhouettes let us glimpse the skin lying beneath. The shoulders are raised, the arms are slender, and the mesh opposes the moving fringes giving maximalized forms calm and serenity. Bags in the shape of a padlock suggest something locked away in the darkness. 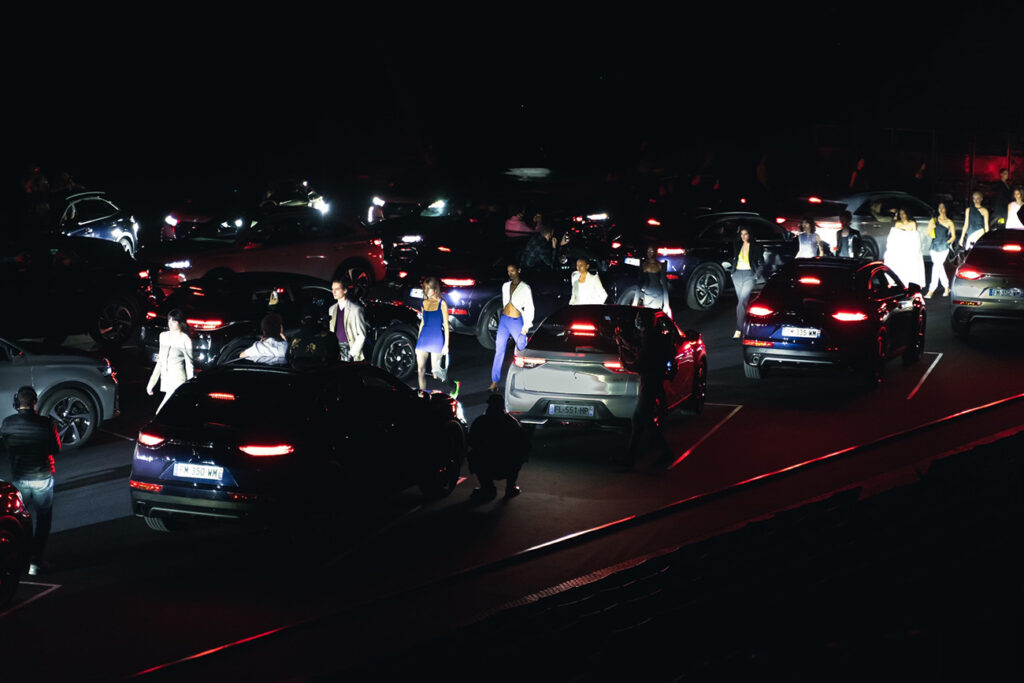 Talking about the preparation for the event, the designer duo said that it took them weeks to obtain the permits for the event, as it was to be held after France’s 6 pm curfew, which was implemented in mid-January in a bid to curb the spread of the virus. The safety of the guests was also taken care of; the drivers driving the cars were tested for COVID-19 and wore special anti-bacterial masks. 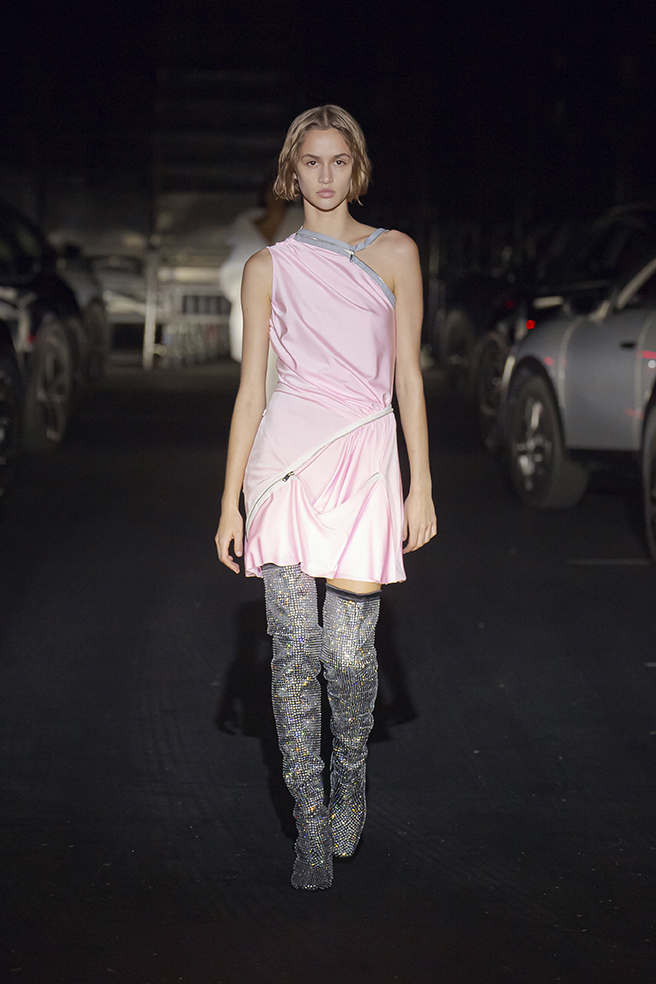 Vaillant and Meyer mentioned the collection is inspired by the fond memories of going out in the 2000s, and they clearly loosened up, playing around with clingy, draped Lycra minidresses and tops, and a palette ranging from black and white to pale pink, fluorescent yellow and electric blue. “It is all about post-pandemic dressing – we are desperate to get back to it!” Meyers said in a statement. 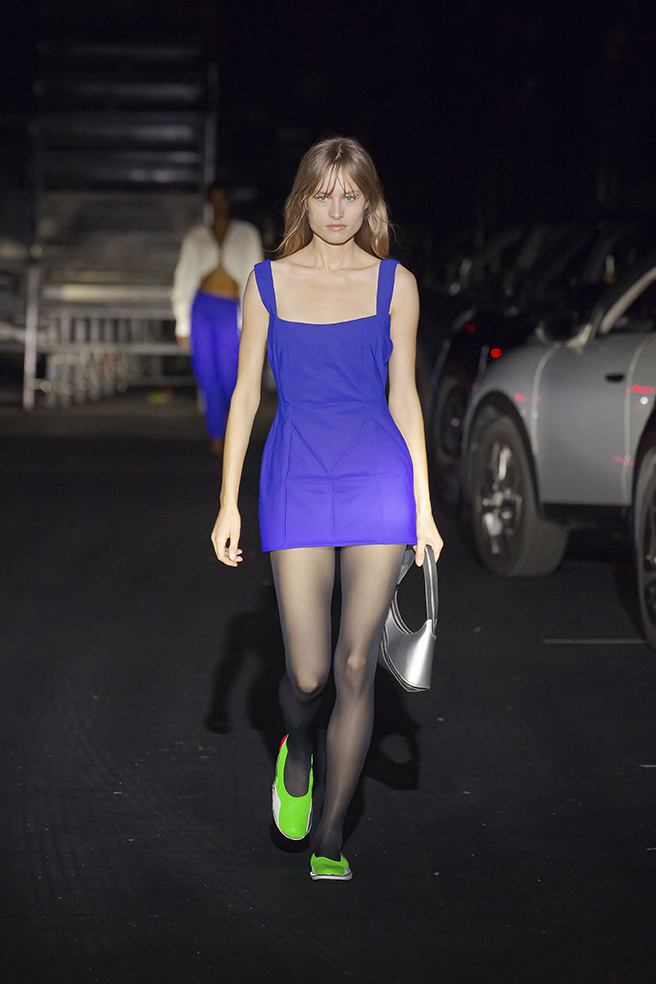 This show was Coperni’s second in-person fashion show for Paris Fashion Week. Earlier, their Spring/Summer 2021 was staged on the rooftop of the tallest building in Paris, Tour Montparnasse. 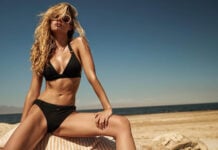 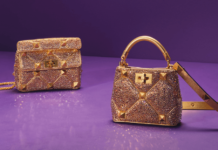 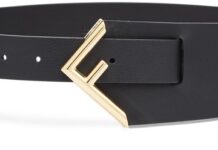