Discover Decadence on Both Sides of Vancouver Island

Whether your destination is east or west, both sides of Vancouver Island, British Columbia, offer visitors upscale experiences with unique vibes. The east side municipality of Oak Bay boasts a genteel and quiet atmosphere, while the west side village of Tofino emanates a laid-back alfresco feel.

Black Ball Ferry Line with M.V. Coho has been moving people and freight since 1818, and they make it easy to get from Port Angeles, Washington, to Vancouver Island. The early morning ferry whisks people and cars across the Strait of San Juan de Fuca to the beautiful city of Victoria in just 90 minutes.

Opulence on Vancouver Island’s East Side

Oak Bay is located on the southeastern side of the island. The shopping area boasts galleries filled with treasures from local artists, culinary delights crafted by local charcuterie, bakers, and chefs, and an air reminiscent of old England where afternoon tea is still a local tradition.

The Oak Bay Hotel & Spa wraps visitors in the proverbial “lap of luxury” with their enchanting entryway featuring old-world furnishings and a baby grand piano. The original hotel, built by Major Merston in 1927, was ravaged by a fire on October 14, 1930. The hotel, rebuilt and reopened in 2012, rests on the same site and replicates the English Manor House style. 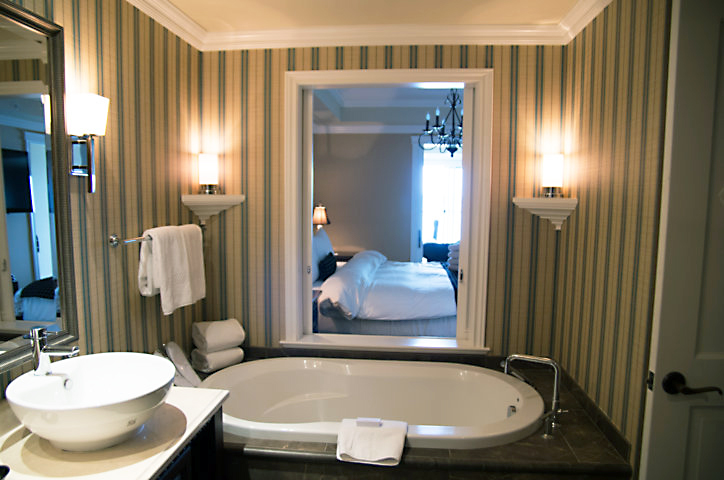 My ocean-view-suite featured a spacious bedroom, luxurious bath, well-equipped kitchen, and a living/dining space overlooking the hotel’s pool and the Salish Sea. I spent the first hour of my stay entranced by the view from my balcony. Finally disengaging myself, I unpacked my bags and headed down to the Snug Pub for a bit of lunch. 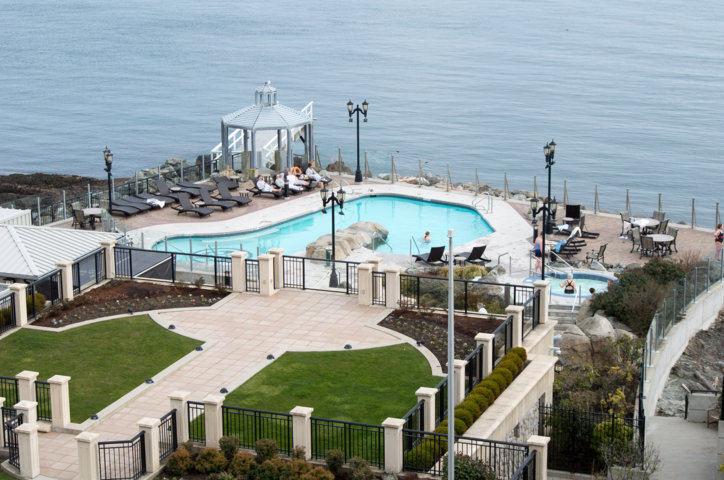 The pub serves an eclectic array of enticing food and beverages. The portobello wrap, accompanied by unparalleled sweet potato fries was filled with mushrooms, avocado, sprouts, and garlic aioli. The Boathouse Spa and Baths, located right next to the sea, offers a variety of massage treatments, facials, wraps, and scrubs.

Medone Pelan, Director of Sales and Marketing, says, “The hotel is a worthy legacy to its renowned predecessor and features world-class services such as seaside mineral baths and fine dining. Our well-appointed guest rooms and suites offer complimentary parking and Wi-Fi during each stay. The hotel is the perfect vantage point from which to experience the best of the Pacific.” 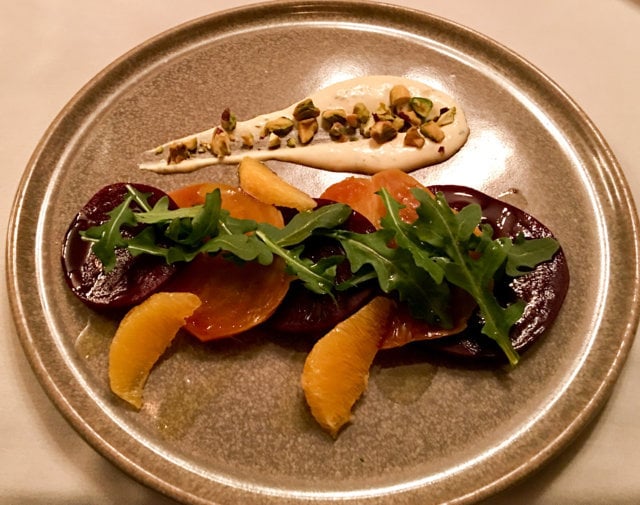 Tofino is a tiny village with approximately 3,000 year-round residents and over 10,000 during the summer. To reach this secluded paradise, you must drive about three hours through the mountains, crossing the center of the island over to the west coast, or fly in on a seaplane. 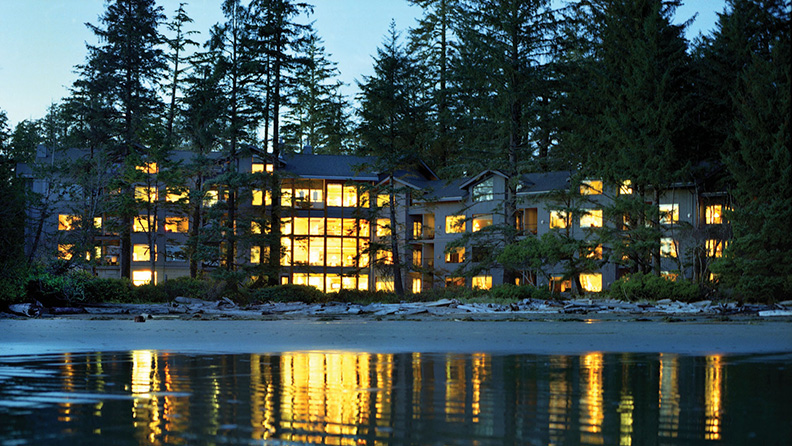 The Wickaninnish Inn faces the wide-open Pacific Ocean with nothing but water between it and Japan. It is the perfect place to enjoy winter storms, fabulous surfing in the summer, and impeccable service all year-long in an extravagant setting. Claire Macdonald, Marketing & Leisure Sales Manager, says, “The Inn is owned and operated by the McDiarmid family, who maintain a sense of stewardship for the community and area. This commitment to artisanship, environment, and quality has positioned the Inn as a perfect launchpad for exploring all the tangible and intangible elements of Tofino and Clayoquot Sound.” 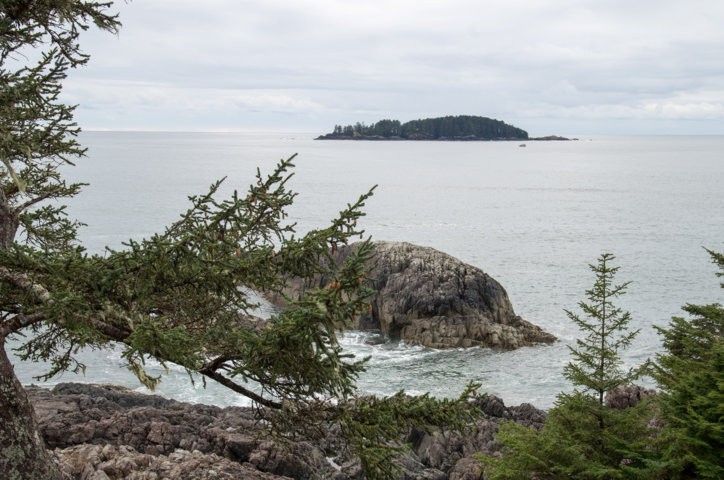 The Inn exuberates rustic elegance, and designers have managed to bring the outdoor beauty inside. Surrounded by the Pacific Ocean on three sides and backing up against the forest, the 75 rooms and suites all include gas fireplaces, soaker tubs, high-speed Internet/Wi-Fi, Bose CD/MP3 players, and many other luxurious amenities. The Ancient Cedars Spa offers guests a holistic environment, a variety of treatments, and professional practitioners. 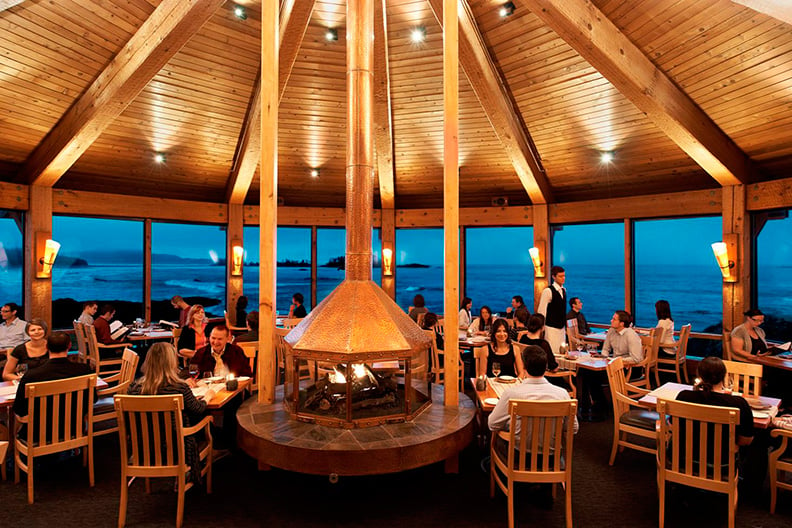 Executive Chef Warren Barr at The Pointe restaurant has quite the reputation, and he lived up to the local hype. My dining experience began with grilled sunchokes. Locally sourced from Medicine Farm, the sunchokes were prepared with smoked figs, fig leaf oil, malt caramel, and toasted sunflower and shallot crumble. Next, I indulged in the slow-cooked Cache Creek Beef tri-tip with Bluefoot mushrooms, caramelized onion, gnocchi, and blue cheese. The meat was tender and rich, and the blue cheese cut through the heaviness creating a lusciousness in the mouth. I ended my dinner with a rich chocolate éclair. 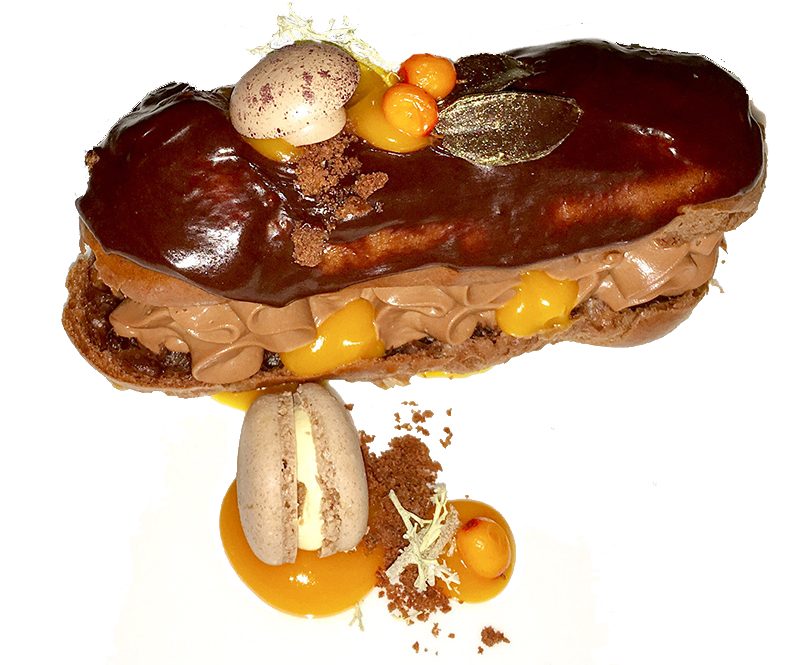 History abounds around the Inn, and “Henry’s shack” on the beach near the Inn is an icon in the area. Henry Nolla, known affectionately as the naked hippy, lived on the beach before the Inn existed. He and Charles McDiarmid became friends, and eventually, Charles had a shack built for Henry further down the beach. Charles commissioned Henry, who was an accomplished woodworker, to do woodwork crafts that can be found throughout the inside and outside of the Inn.

Today George Yearsley lives in Henry’s shack. George met Henry in 2001, and Henry’s lifestyle touched George. Spending numerous hours with Henry over the years, George studied Henry’s artistic abilities and simultaneously perfected his own. George’s hand carves exquisite cedar eagle feathers. The feathers are so delicate and detailed they look as if they could float away in the breeze. 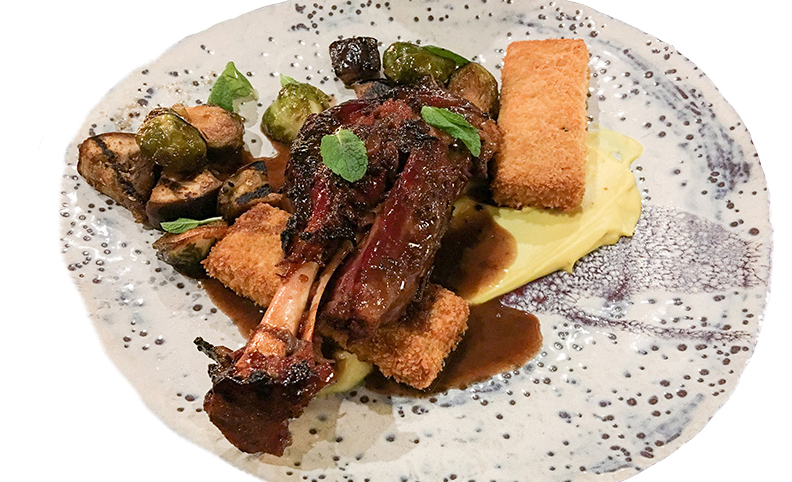 Tofino is a small village, yet it has several tasty restaurants. A local favorite is Shelter Restaurant serving seasonal ingredients and food-friendly wines. The mouth-watering Shelter Tuna Stack with local albacore tuna, miso, avocado, sesame-marinated cucumber in a soy-ginger glaze served with crispy wontons is spectacular.

Renowned Canadian Chef Nicholas Nutting runs the Wolf in the Fog restaurant. Chef Nutting says his approach to food is to “honor the ingredients enough to let them speak for themselves.” My dinner began with a Lynn Road Lemonade made with a bourbon-style whiskey, orange & sumac liquor, lemon, and soda. The lamb pancetta was a standout appetizer with house-made crispy lamb pancetta, roasted and pureed cauliflower, almonds, and arugula—all tossed in a sherry brown butter. The roasted sablefish with chewy grains, miso-whey caramel, black garlic, daikon, yuzu, and moist, flaky sablefish was a perfect representation of fabulous Canadian cuisine. 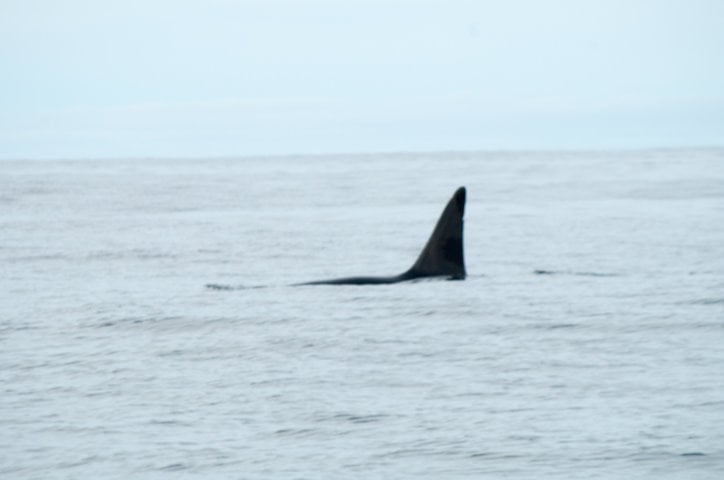 Jamie’s Whaling Station and Adventure Centres offer exciting tours in the area. I joined their “Sea to Sky” trip to Hot Springs Cove. The boat ride was exhilarating, and we saw several Orca whales along the way. The captain dropped us off about half a mile from the springs, and my group hiked along a boardwalk to the designated site. The multi-level springs offered soothing waters of varying temperatures. The closer you got to the mouth of the spring the hotter the water.

After a couple of hours, I hiked back enjoying the lush forest and peek-a-boo views of the ocean on my way to the docks where one couple and myself were picked up by Atleo River Air Service’s four-seater seaplane.

Liam, a local guide, offers free guided nature walks to guests at the Inn. Walking along the beach and through the huge old-growth forest, he tells guests about the history of the area, wildlife, and engaging local stories. 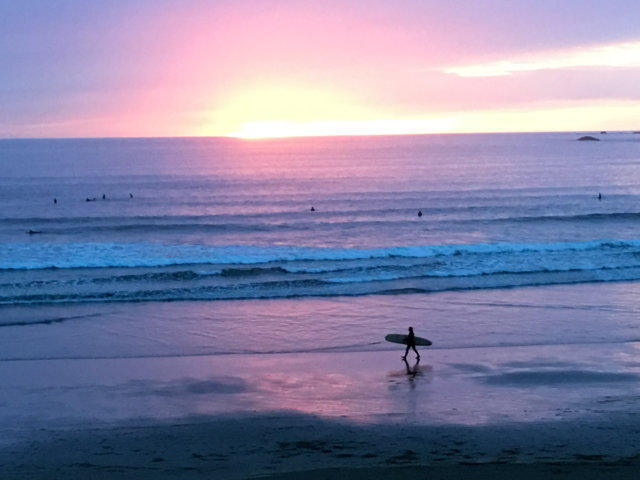 Long Beach Lodge Resort is located on the beautiful beach at Cox Bay and is the best spot in Tofino to watch surfers ride the waves. The resort offers onsite classes, so anyone can join the locals in the water and then get a good night’s rest in one of the 41 luxurious lodge rooms or 20 cottages.

The Resort’s restaurant, The Great Room, boasts delicious local cuisine, fresh oysters, and an approachable wine list. I enjoyed the oysters and then indulged in a juicy lamb shank paired with a glass of local Pinot Noir. The Great Room boasts floor-to-ceiling windows looking out onto the bay. Most of my afternoon was spent watching the skill and expertise of the talented athletes out on the water. The Resort’s location also offers a spectacular view of the sunset.

Take the time to visit Vancouver Island and discover all the luxuries it has to offer on either side of the island. 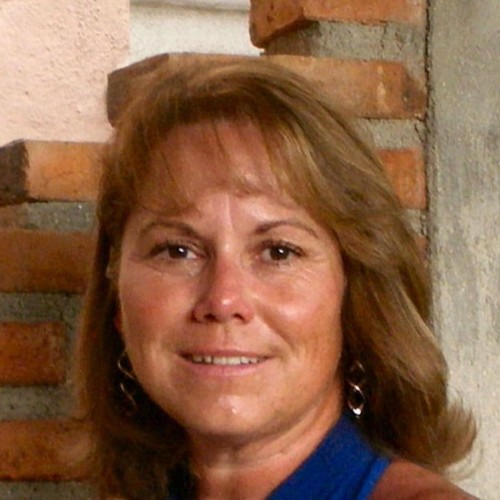 Tracy Beardhttps://www.tracybeardwrites.com/
Tracy Ellen Beard is a freelance writer and photographer based in Vancouver, Washington. She contributes to Luxe Beat Magazine, Communities Digital News, Wander With Wonder, and several other magazines. Her stories focus on luxury and adventure travel, fine dining, wine, nonprofits, and alternative medicine. Tracy shares a unique perspective on the world, which comes from both her personal travels and her excursions as the founder and past president of an international children’s nonprofit. Her fifteen years of experience writing in various genres has added to her expertise. She is a member of the AWAI (American Writers and Artists Inc.) and the ITWPA (International Travel Writers and Photographers Alliance).
Previous articleCruising the Rhine with Viking River Cruises
Next articleLuxurious Wonders in Woodinville, Washington