As a motorcycle, Ducati’s 2019 Diavel 1260S is an experiment in hybrid engineering. To create the new model the Italian company set out to merge the best qualities of a superbike, a sport naked, and a cruiser.

A shorter classification would be sport-cruiser—something that possesses comfort and cool, while living up to Ducati’s high-performance DNA.

Some would say those two worlds are a bit tricky to meld into one motorcycle. Ducati was undaunted by the task with its new Diavel 1260S.

I spoke to the bike’s architects and got a chance to ride the new motorcycle at a press test in Spain.

On engineering and design, Ducati was quick to point out the 2019 Diavel 1260S is “not just a facelift” but largely new over its ’18 Carbon and Titanium Diavel models.

The 481-pound machine got a revised rider position, with more space in the saddle and the pegs shifted back a bit. The fork rake was modified from 28 to 27 degrees, for more responsive turning.

On design and styling, Ducati merged aspects from the motorcycle’s three-class inspirations: the side and belly fairing of a superbike, the hump fuel tank, forward engine position and light/bar placement of a sport-naked; and the rear frame lines and a sunk-seat of a cruiser. 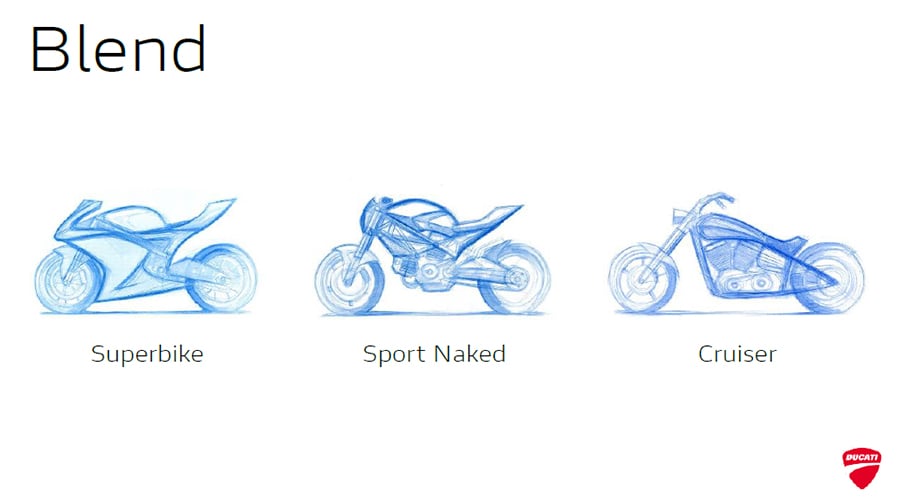 Ducati gave the 1260S a MotoGP size 240mm tire on a 17-inch rim—that’s nearly 10 inches of rubber that give the bike a distinctive look from the rear.

The new Diavel packs 159 horsepower and 95-foot pounds of torque from its Testastretta DVT 1262 engine.

And to regulate power and handling, Ducati wrapped the 1260S with digital performance options. It has a ride-by-wire throttle, Ducati’s DQS clutchless shifting, adjustable cornering ABS, and traction and wheelie control.

The Diavel also has preset riding modes—Sport, Touring and Urban—with optimal calibrations off all its digital performance features for different riding conditions.

Of course, so much premium tech and engineering command a premium price. The new Diavel 1260S comes in at $20,395 for the base model and $22,995 for the S, which has better suspension and full tech options (specs here).

So how’s the Diavel 1260S on the road? A 220-kilometer test run through Southern Spain revealed a lot about Ducati’s.

From twisties to highways, to slow rolling in rural towns the 1260S demonstrated dynamic performance, comfort, and the ability to cruise and exert cool.

When called to duty, the 159 horsepower, 8-valve-twin brings tremendous acceleration and speed.

The ergonomics of the Diavel 1260S allow one to ride in fairly comfortable position at slower speeds and then shift into a sport-bike position when pressing the pace.

To Ducati’s goals, the motorcycle is a dynamic hybrid that does offer sport-bike performance, with the ability to show up to bike-night and fit in with a cruiser crowd.

One difference, however, is the Diavel 1260S could leave any conventional cruiser in its exhaust fumes if the casual riding turned to speed.