Connoisseurs eulogize about the stewed apples, the spicy oak, and its velvety, buttery “mouthfeel.”  Some say it has all the hallmarks of a complex Calvados or Armagnac.  Some profess that there is no finer English-made digestif. “The Spectator” called it “the best brandy produced from English grapes.”

And it was a long time coming. Distilled in Somerset in 1992,  Chapel Down’s “Lamberhurst Estate Fine & Rare English Grape Brandy“ is aged for 23 years in French oak before its release in 2016. Just 2000 bottles were produced; each bottle is individually numbered by hand.

It is made from Seyval Blanc harvested on the Lamberhurst Estate in Kent -owned at the time by Sir Kenneth McAlpine.

The origins of the word ‘brandy’ are rooted in the Dutch name brandewijn – literally ‘burnt wine,’ which dates back to the 12th-century process of boiling wine down to reduce the volume in casks before transporting it overseas. 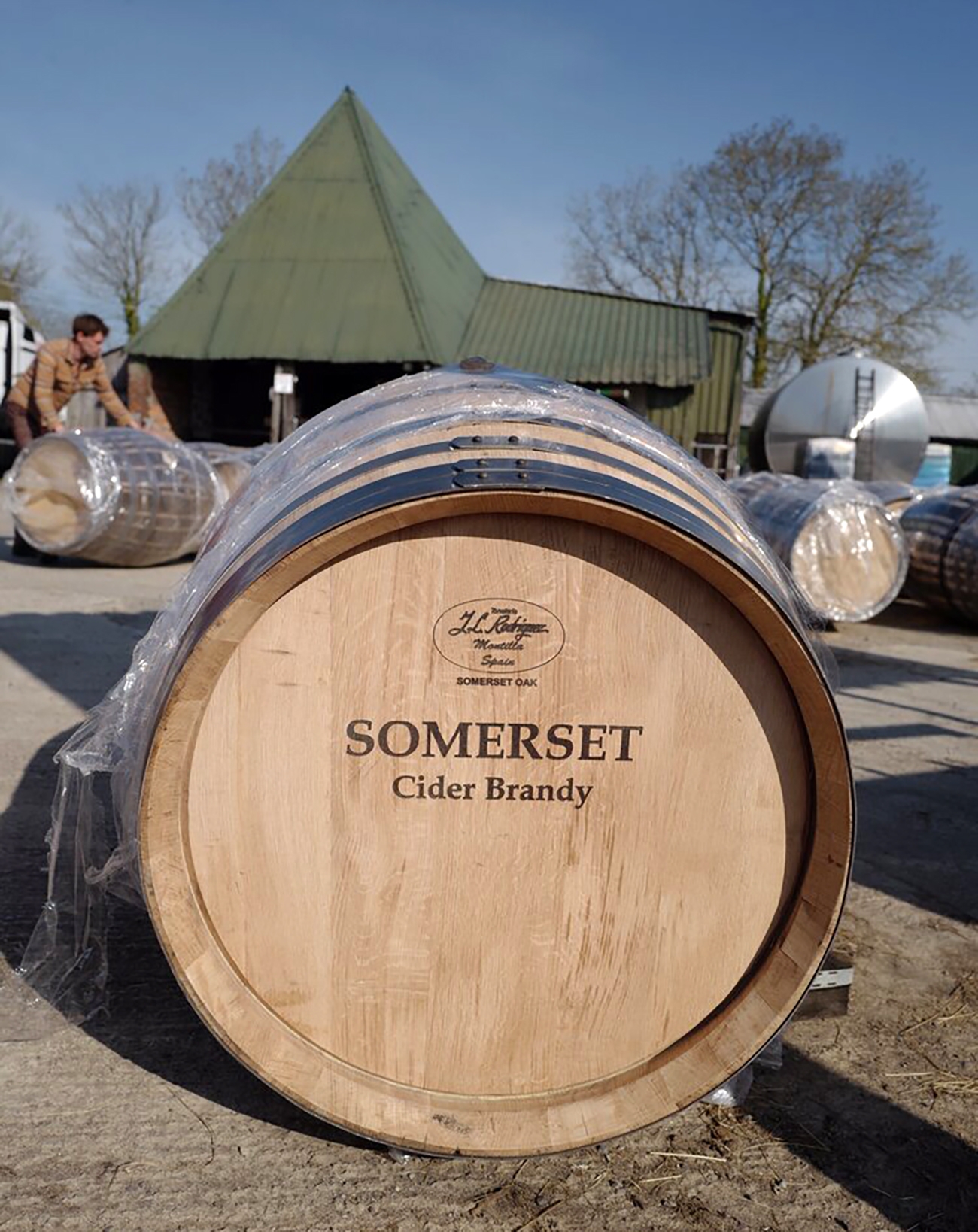 If Chapel Down in Kent is the home of English wine as well as English brandy, then Pass Vale Farm,  Burrow Hill, Kingsbury Episcopi, Martock in Somerset is the home of English cider brandy.  The farm with its 180-acre apple orchards has been pressing cider for 200 years.  In 1989, it was granted the UK’s first full cider distilling license, and for the past thirty years, it has been making its award-winning cider into Somerset Cider Brandy ever since. They have a brandy called “Somerset Alchemy.” Somerset Cider Brandy was the only spirit on the menu at the wedding of Harry and Meghan. Forty over forty varieties of vintage cider apples such as Dabinett, Kingston Black, Stoke Red, Yarlington Mill, and Harry Masters

Half of the cider produced is set aside for distilling in “Josephine and Fifi,” the copper stills. The resulting clear spirit, Eau de Vie, is trickled into small oak casks to mature into brandy. Somerset Cider Brandy is bottled at 3, 5, 10, 15 and 20 years. Each bottle can be traced back to its source orchard. The twenty-year-old cider costs £100. 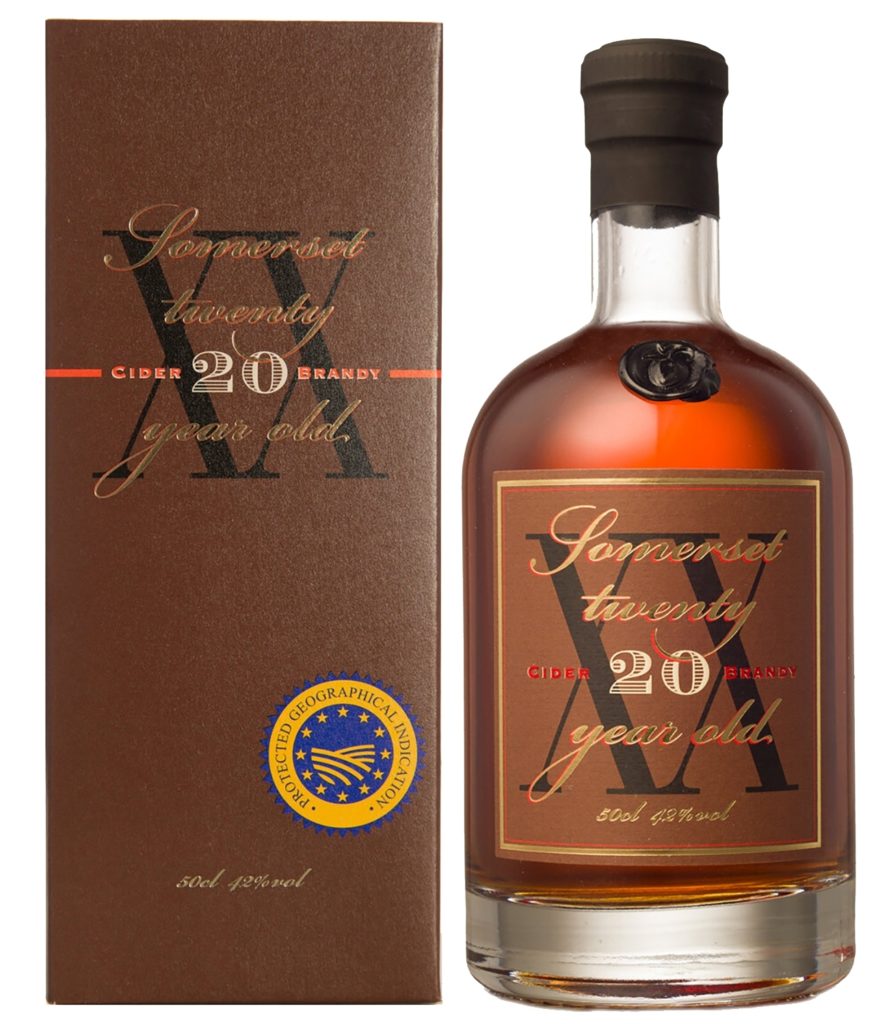 When people think of apple brandy, they usually think of Calvados, the French apple-based spirit. However, Calvados is not made solely from apples: it’s traditionally made with between 10 and 35% pears, depending on which part of Normandy it is produced.

Dr. John Walters of “English Spirit,” based in Essex and Cornwall, is also a brandy cider maker. “About 1200 kilos (or about ten trees worth) of English apples, fermented and turned into cider. We use five different apple varieties, sourcing from Somerset and Norfolk. The mix of apple varieties helps us to balance between apples with acidity, sweetness, and tannins: all of which we need to make a fine Apple Brandy.

“We distill I five times in our small 200-liter copper pot stills. It’s an uncompromising process. It takes a lot of skill, a lot of time and a lot is thrown away. But it’s necessary. It allows us to slowly trim and refine the heads and tails fractions of the distillate, to expose the exact cut of the heart of the spirit we need. Or put, to ensure we skillfully remove the unwanted parts of the spirit without compromising any of the flavor or quality.

“Quintuple distilling is to intensify the complexity of our spirit. The lovely apple eau de vie is then given rest in English oak barrels for a minimum of six months. Six months is the minimum requirement for any brandy. The quality of the spirit is usually tied to the length of time spent in the barrel.”

Apple Brandy can be sipped neat. Or drunk as an aperitif or with cheese. It’s great in apple sauce too.

Barrie Gibson came to brandy via Hull, TV, academia, and cider. “We only had six trees and friends’ apple. We pressed by hand and paid helpers with bottles. We make 7.5% champagne-style cider and now Cornish Fowey Valley I year Oak Aged Cider Brandy.” 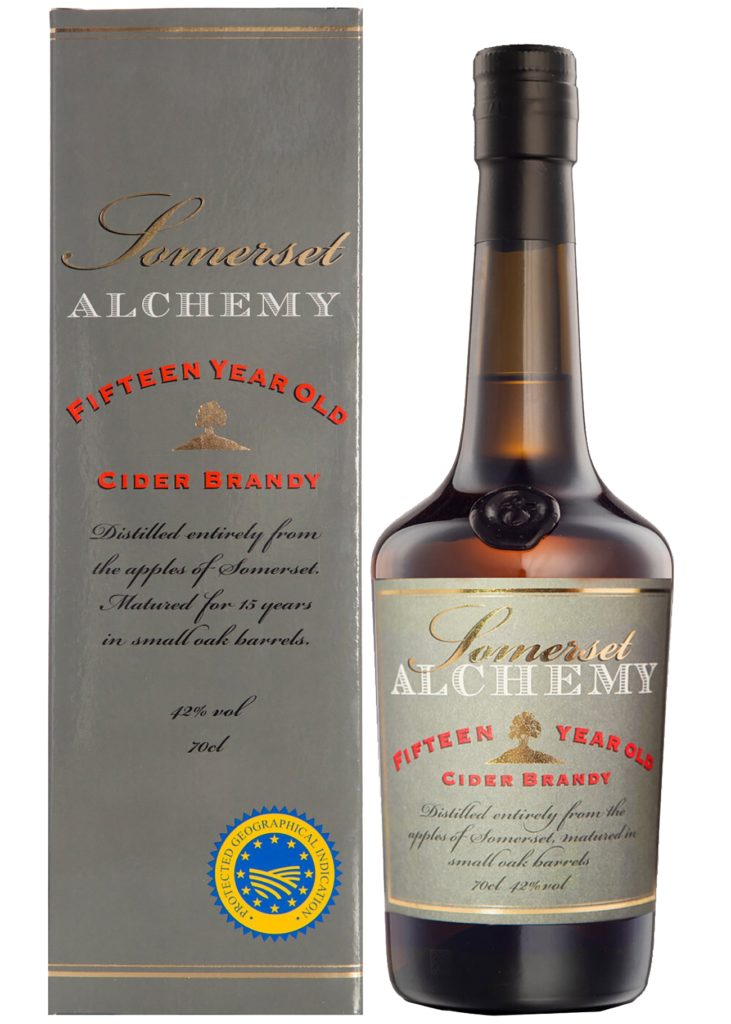 They are distilled twice from their vintage cider up to 65%ABV. It’s then laid down in new, small, medium toasted, American oak barrels for more than twelve months. It is straw-gold with black cherry and sandalwood on the nose. On the palate are nuts, molasses, and raisins with a hint of licorice and pepper.

Grumpy Frog is the main ingredient of Bill Buckley’s “Spirit of Ilmington, Made in the north Cotswolds of Warwickshire, the brandy uses cider named after the village’s Grump Street and Frog Lane.

“Greensand Ridge Apple Brandy” is made from sweet dessert apples collected from fruit growers across Kent and Sussex. After a long fermentation, the cider is distilled and aged in ex-bourbon barrels. Since the apples are surplus, the varieties and ratios changed year-on-year – One bottling was made with 60% Gala and 40% Mairac variety. They also make an upmarket Kentish “slivovitz” plum brandy. It’s affectionately called “the whiskey of the Weald. From the old English for woodland, it now refers to the area of South East England between the chalk escarpments of the North and the South Downs, crossing the counties of Hampshire, Surrey, Sussex, and Kent.