Shock and horror. Ferrari has built an EV. Well, that’s not entirely true and that’s not a lie as well. In all honesty, the Ferrari SF90 Stradale is a plug-in hybrid- a first for the famed Italian car-maker. So yes, you can trundle along in the cramped urban jungle in electric power only up-to 84 mph and you cruise around doing that in your bright Italian supercar for 16 miles also. However, that’s way better than waking up your entire neighbor-hood with a V12 and also less anti-social when driving around in our cities. 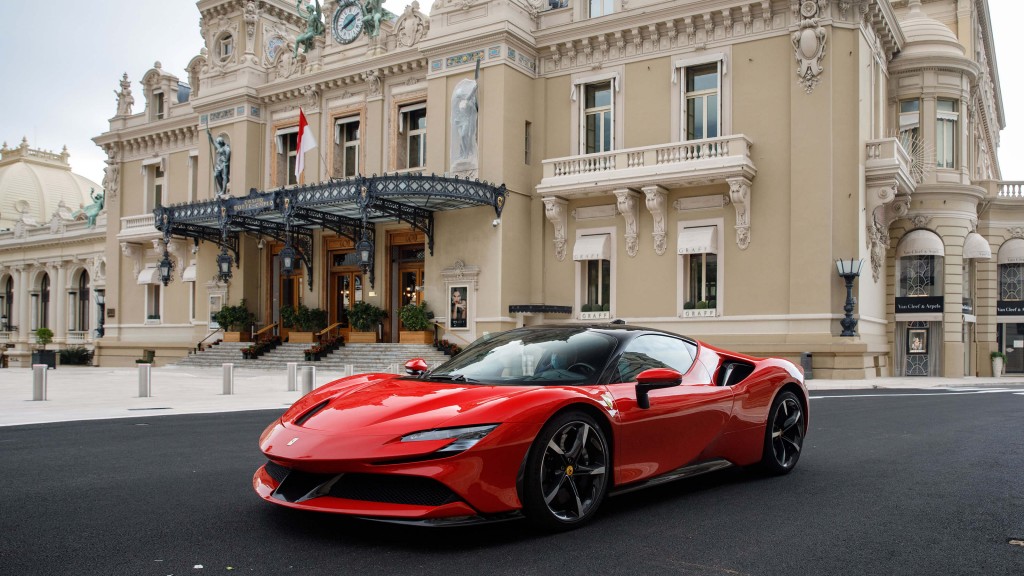 Let’s face it: owners of the SF90 Stradale will hardly every track their cars so these credentials are important. It is also crucial at this juncture to talk about the positioning of the SF90. It is not a LaFerrari replacement and nor is it a limited edition special designed to kept in a temperature-controlled garage as this is a regular production car which you can walk into any Ferrari dealership and buy one. Just like a Portofino. However, at a snip under $ 600,000, it is pricier than an 812 but a bargain in front of the mighty LaFerrari. Just like the Roma that we earlier spoke about; the SF90 Stradale is about Ferrari expanding its horizons and also embracing its ‘greener’ side a bit more.

However before the Tifosi make an angry protest towards the gates at Maranello, a cursory glance at the performance figures reveals the astonishing capabilities of this supercar. It will eat an 812 Superfast alive and pretty much every other supercar. That is not all as it might even out-run the mighty LaFerrari at Ferrari’s testing ground too. Unlike the LaFerrari which only used electricity to nudge its horsepower output even more; the SF90 digs deeper into the magical allure of electricity. You get a V8 and three electric motors where there are two each at the front wheels and one at the rear. It is an all-wheel drive and the combined force of an internal combustion engine and the electric motors give it 986 bhp. The base of this magical figure is the award-winning twin-turbocharged V8 which has been increased up-to 3990cc and develops 786 bhp.

There are two versions on offer and there is a harder-edged ‘Fiorano’ package which is even lighter, faster, and wears sticker tires. The performance figures are so biblical that it makes you wonder whether the SF90 will actually take off the runway. It will dispatch 0-62mph in just 2.5sec- faster before you can even spell out its full name. Plus provided you do have a good explanation ready for the cops: a top speed of 212 mph. To harness all this complex technology and horse-power, Ferrari has ditched the earlier 7-speed dual-clutch gearbox in favour of a new, lighter 8-speed one. 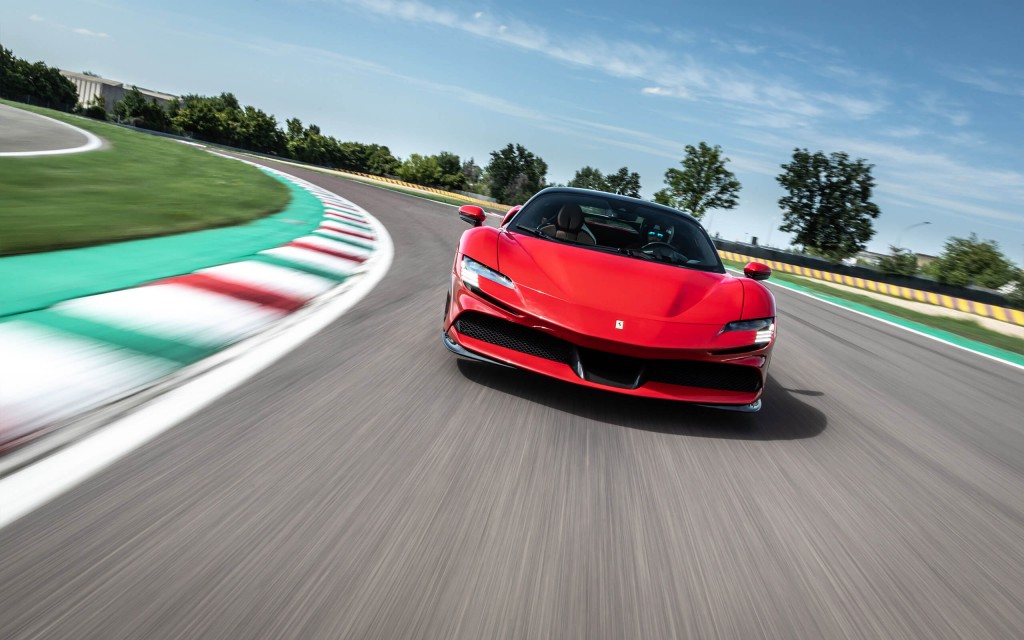 Thus while the performance is extra-ordinary the mid-engined layout and the long list of complex systems give it immense levels of grip. However, this is a supercar and not a physics lesson. The SF90 is incredibly complex but not to drive since all you have to do is select one of the four drive modes and you’re off.

You do get a steering wheel that is festooned with buttons and everything is designed for the driver to indulge in the serious business of going fast or rattle the egos of other super-car drivers. You can actually operate nearly all of the functions without moving your eyes across the dash. Gone are the days of the F40 when only a thin steering wheel and a few dials are all that you would get as now the SF90 Stradale takes Ferrari right up-to the top of the in-car interface and experience. There is a new digital 16-inch curved instrument cluster that serves up the majority of the in-car functions. Another tech that’s been grafted in is a heads-up display and a new key-less entry- something we spoke about in the new Roma as well. Amongst all this, an old-school metal gated gear selector- designed to mimic the old gated Ferrari manuals of yore, looks a bit out of place. That said it is decently roomy and luxurious to boot.

What about the styling? We have waxed lyrical about the Roma in these pages some-time back as it was Ferrari returning to old-school GT style design but the SF90 Stradale is very much a space-age design that blurs the line between a GT and a hardcore supercar. The design is probably the most futuristic Ferrari yet and also somehow manages to hold onto the theatre that a mid-engined Prancing horse should exude. The front is characterized by a complex hierarchy of lines and a slim head-lamp treatment (Matrix LEDs) while the high-set rear tail-lamps and the wide stance of the rear has a whiff of the lairy wide-hipped Testarossa. This being Ferrari of today, there is a lot of aero and a lot of science that has gone into those lines but overall the SF90 Stradale is indeed a proper jaw-dropping supercar- if not in the same mold that we have always expected from a new Ferrari.

As said earlier, the SF90 Stradale brings up a lot of firsts for Ferrari and the fact that you can plug it in for charging is probably the biggest indicator of the change that’s brewing in Maranello. It is not the exotic all carbon tub LaFerrari as it has more aluminum in its architecture and it is more affordable greener, quieter, more comfortable, and the sort of Ferrari that makes loving and owing supercars in today’s age more than acceptable. This is Ferrari at its adapting best and behaving like the market leader that it is. The V12s and the slinky shapes plus the astronomical price-tags will still be there but the SF90 Stradale is Ferrari thinking out of the box yet still keeping the family values close at heart. We approve.

Somnath Chatterjee
For me, the biggest luxury is the freedom to go anywhere at any-time and that is something which the humble automobile gives us. Been in love with cars for as long as I can remember and have been writing about them for nearly a decade now. Specialize in reporting about luxury and performance automobiles while having driven everything from a Ferrari to a Beetle!
Previous articleDelectable Prosecco & Sparkling Wine Varieties To Try This Summer
Next articleWhy Choosing a Luxurious Nursing Home For Your Elderly Is Better

Rob Doyle is one of the new generations of yacht designers tackling the modern challenges of the large yacht business. With a solid 20-year...