‘Clinging to the clifftop, the lavish pastel-hued hotel has breath-taking panoramic views of the glistening Tyrrhenian Sea…’ Sound familiar? Of course it does; it probably sounds like every review you have ever read of the Amalfi Coast. So, I shall dispense with clichés.

Firstly, there is no clinging going on here. The Grand Hotel Excelsior Vittoria has been proudly standing on Sorrento’s cliffs since 1834. In fact, as I scan the vast terrace, manned by straight-backed white-jacketed waiters and separated from the sea by the stone balustrade’s stern marble busts, the only clingy things in this joint are the pale-faced newlyweds opposite, clutching their VISA card for dear life as they await il conto and the bodyguards sticking to the neighbouring family like glue – to which nobody bats an eyelid. Well, when you are the most luxurious hotel in one of the most sought-after resorts along one of Italy’s most exclusive stretches of coast, they come as part and parcel.

Over the years this historic hotel has played host to some of the biggest names in film, literature and music; think Sophia Loren, Michael Caine, Pavarotti et al. It’s also had its fair share of global royalty – as proven, in true Italian style, by the framed photographs in the lobby. Some of these VIP guests have suites dedicated in their name – our very own Princess Margaret must have made quite an impression: hers is rammed to the rafters with antiques and a red marble bathroom housing a grand cast-iron bathtub – with English taps, of course. One of the hotel’s most famous guests is operatic tenor Enrico Caruso, who spent his final days in the hotel back in 1921. His bedroom has been preserved and still features his piano, writing board, letters and photographs.

Despite not quite cutting the mustard on the superstar front and having no blue blood to my name (although my bonkers mother is convinced that we had a dwarf Welsh prince in the family), I received the warmest of welcomes. Not one of a Princess perhaps, but of a family friend – something far harder to carry off. Having been in the same family since its opening, the Excelsior Vittoria is now run by the fifth generation of the Fiorentino family.

We were greeted by Rosa, who has been manning the front desk for 18 years. Impressive you say? We thought that too, until we pulled up a pew in the fresco-clad Vittoria Dining Room, where we had our tea poured by an adorably giggly waiter that had been serving the family for three decades – he told us this whilst attempting to conceal a proud smile. As we left the bountiful American buffet passing through a string of regal rooms (the Belle Epoque music room, where cherubs adorn the arched windows, through the Reading Room where teal armchairs, accented with gold sit beneath yet more frescoes and finally in to the Art Nouveau-style Winter Garden, which is kitted out with the same chairs as the Musee D’Orsay) a friendly concierge gave our 1 year old a warm and genuine wave – I couldn’t resist and asked him how long he had been with the hotel. 46 years. No wonder this place ran like a well-oiled machine.

As much as I loved the palatial rooms, it was the gardens that captured me. All five acres of them. A morning walk revealed pristine groves, heavy in oranges and lemons, a rose arbour, flower beds packed with blooms all fighting to be seen and a secret champagne bar. Hidden beneath a verdant pergola at the hotel’s entrance, it felt a little like the hotel’s last offering of Dutch courage before releasing you in to the madness of central Sorrento. Bottoms up!

Originally called Surrentum, the Greeks founded the town back in the 6th century BC. Known as ‘the city of the sirens’, it was renowned for mythical creatures which lured sailors on to the perilous rocks with their hypnotic songs. Later it was the Romans who flocked to the town – in fact the Grand Hotel Excelsior Vittoria is believed to be built upon the ruins of Roman emperor Augustus’ villa. Later, during the 18th century, the town established itself as a must-visit destination for aristocrats and intellectuals embarking on their infamous Grand Tours. Fast forward to today, and Sorrento has become one of the Amalfi Coast’s main tourist resorts.

Despite being firmly on the package tour circuit, the town retains a sense of authenticity, with independent bars and restaurants fronting the main streets and your bog-standard souvenir offering being shunned in favour of cheerful hand-painted pottery, inlaid wood crafts, lacework, linens and of course all things lemon. Conveniently, the hotel’s grand wisteria draped entrance leads straight out on to the main street, Corso Italia. From here, the best of Sorrento is just a short stroll; shopping in the old town, art galleries, museums and historic buildings. The old town’s narrow streets don’t feel dissimilar to the backstreet souks of Morocco, with a constant stream of locals and tourists perusing the dark alleys’ shop fronts and stalls, beckoning a barter.

Nearby, the Museum Correale di Terranova, houses a robust collection of paintings from 17th and 18th centuries across its four storeys, as well as other historical artefacts, including an impressive porcelain collection. Named declared Italy’s most beautiful provincial museum, the family-owned affair is fast approaching its centenary.

A few minutes’ walk in the other direction leads you to the town’s cathedral. Known for its triple-tiered bell tower, the ornate exterior staves off post-breakfast fresco withdrawal nicely and inside, offers a peaceful retreat from the busy streets.

Those keen to explore further afield can hop in the hotel’s James Bond-style lift, which delivers you down the cliffside to Marina Piccolo, where you can catch a boat to Positano, Amalfi or Capri.

Unsurprisingly, the hotel also houses one of the area’s finest restaurants: Terrazza Bosquet. Dinner here is spent staring head on at Mount Vesuvius and watching Naples spring to life after dark in the distance. Serving creative regional cuisine with an emphasis on fresh, local ingredients, the hotel’s own citrus bounty often makes a guest appearance. Its coastal location has led to a dedicated seafood tasting menu – although we did enjoy a superb cheek of beef with black garlic, artichoke, and an iced consommé of oregano on our visit. I also couldn’t resist ordering Chef Antonino Montefusco’s best-known signature dish: Tribute to Pollock. Inspired by the American painter it features a selection of fresh handmade pasta with smoked potatoes, chives and caviar and its rich smokiness is incredibly moreish. I will you to imagine the Pollock-inspired presentation.

For a family daunted by Sorrento’s traffic and crowds, the Grand Hotel Excelsior Vittoria had provided a peaceful and convenient retreat from which to dive in and out of the town’s attractions. Fresco-clad dining rooms, sea-view terraces, a celebrity clientele and a Michelin-starred restaurant may sound like an Amalfi Coast cliché, but you know what, it works, and after a long weekend here the only thing clinging on was me – to my four-poster bed. 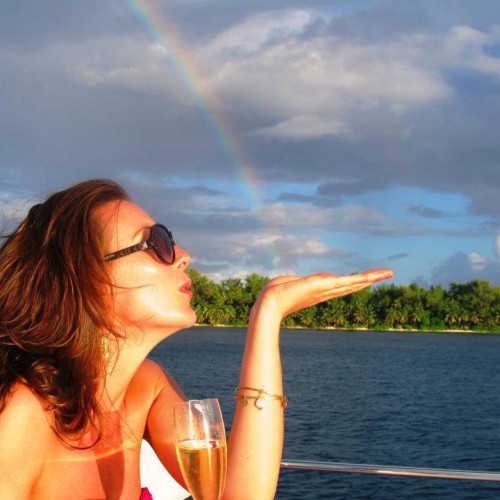