Greece, One of the Most Beautiful Countries on Earth

My first visit to Greece was as fascinating as the country itself. We look at photos, and envision ourselves being there, enjoying the many breathtaking views; from picturesque white houses on a hill in Santorini to magnificent monuments and museums in Athens, to surrender oneself in its beautiful sunsets and overlooking the stunning blue waters of its seas. There is so much to see! The welcoming hospitality of its people, the culture, the cuisines, where does it end? Greece is truly a country of wonderland perfection and exemplary history; and as such, I’d love to take you with me, even if through my reading, on this fascinating journey that offered me impeccable and extraordinary experiences.

I arrived late in the evening at Athens, travelers coming in and out of the country can be seeing throughout the busy airport. “It’s almost midnight”, I said to myself amazed at how fast time has gone by, and although it was late and my body craved a warm shower and a comfortable bed to rest, my mind was going about 100 miles per hour! Nor the time nor my body seamed to subdue the sense of adventure that I felt within. “Finally in Greece!” I said to myself. I couldn’t believe it! After I picked up my luggage, I was met by Dimitri, our wonderful Greek guide who became a dear and funny friend to all of us; Dimitri and Grigoria Kamaterou, the Director of the Greek National Tourism Organization, who was in charge of the trip, were fabulous! Funny, knowledgeable and happy people who I am happy to call my friends. They were the cause that many of us enjoyed this unforgettable destination!

It’s morning time and I am not feeling a bit tired. I was up and ready for adventure. After a nice breakfast of Greek pastries, cold cuts, and an array of cheese, I met with our traveler friends who were also as eager to explore the capital city of Evia. With such a rich history dating back well over a decade, choosing our first stop was a hard task, however, we threw the dice and Karababa Castle was our first choice. Wonderful views of the straits of Euripus and the town of Chalkis can be seen from this beautiful fortress, an impeccable sight to see. Built-in 1684, and designed by the Venetian Gerolimo Galopo, one can embrace its treasurable history. As a matter of fact, inside the fortress is one of the best-kept secrets in Greece – one of the country’s best local museum, packed with well-described artifacts. Also within the fortress was a small church dated back to 1895, said to have been dedicated to the Prophet Elias. Everywhere you turn had a story. After visiting the fortress, we strolled through the streets and decided to stop at Xenia, a nice café not far from us, where we ordered a cold drink and enjoyed a few laughs. 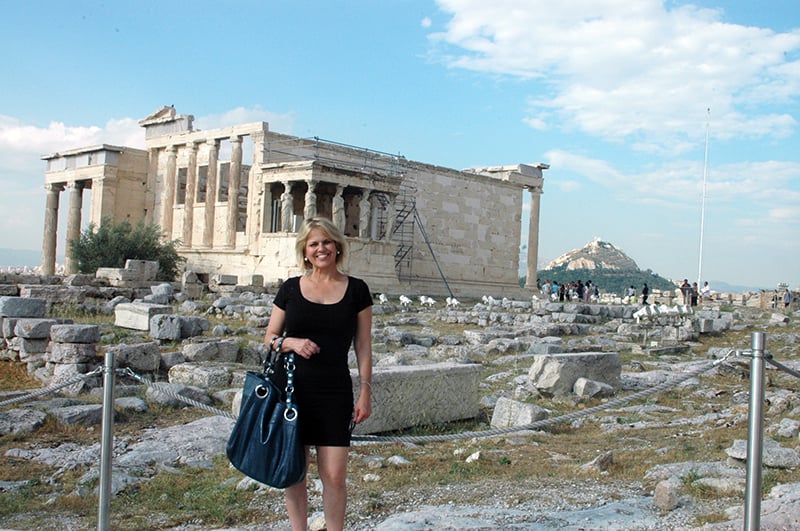 Next day, our traveling group headed to Athens, the capital and largest city of Greece, and one of the world’s oldest metropolises. If you’ve never visited Athens, you will surely enjoy your stay; you can notice all periods of Greek history throughout the city; from Ancient times and Roman occupation to the Turks and Modern Greece, a true inspiration. We arrived at the Acropolis Museum, a truly world-class architectural gem; there I was able to see the stunning displays of over 4,000 statues and artifacts, and when you first enter the museum, you will be able to see, through the plexiglass floor, the ruins of an ancient Athenian neighborhood, which were artfully incorporated into the museum design after being uncovered during excavation. After wandering through the exhibition halls, we walked over to the Parthenon, a historical landmark that can’t be missed. Words or pictures cannot describe the majestic Hellenic masterpiece. We all took plenty of photos and walked through the ruins. After a few hours, we decided to stop for a nice glass of wine and taste some of the Greek cuisines at Dionysos Zonars, an elegant restaurant offering the most spectacular view of the Acropolis. What a wonderful way to end our visit to Athens! truly the place where the past meets the present and creates the future.

For the next couple of days, we took in the many locales to dine, explore and even relax; heading for Mesohoria was a treat, where we visited the Purple Cave for diving, and later, lunched at the traditional tavern at Almiriki, a little restaurant by the sea where every dish brought to our table was excellent! the eggplant salad, the chicken, cheese, etc. delicious! A whimsical day spent with old and new friends, taking in the sunset, drinking and splurging in fine Greek cuisine. The next few days we all explore the vicinity towns and enjoyed every detail. We also had dinner with the Deputy Governors of the region who hosted us at Delfinia Restaurant, the best food in Stavros! Delicious traditional Greek dishes came to our table, fresh fish, lamb, goat and a variety of fresh vegetables and salads, a true culinary treat with undeniable beautiful views.

Early next morning we departed towards Northern Evian where we had the opportunity to meet with the Consul of Central Greece. There we had coffee and some traditional sweets. We were also welcomed by the Mayor at the town of Edipsos, great Greek hospitality! Everyone was so welcoming and happy to share with us the beauty of their country. Now, it was time to head to Lihadonisia, The Maldives of Greece! Consisting of a group of islands that emerged after a big earthquake thousands of years ago, mythology has it that the islands were named after the servant of Hercules, a spectacular view! While there we stayed at the famous Hotel Spa Thermae Sylla, considered the first modern hotel in Aidipsos and frequented by the likes of Winston Churchill, Aristotle Onasis, Maria Callas and many others. I was delighted with my surroundings and thrilled to experience the splendor of such a hotel. My room overlooks the Eubean Gulf; beautiful décor adorned my spacious room, comfortable slippers & bathrobes with luxury bath amenities, I was in for a wonderful gratifying time!

After a nice cup of tea, I headed to the Thermal Spa for a little relaxation and rejuvenation. Faced with a list of spa treatments offered, I had a hard time deciding, however, I opted for the mud therapy bath. I lay down on a bed where the therapist massaged mud over my body until I was covered from head to toe, next I was wrapped in a warm blanket and given approximately 15 to 20 minutes to succumbed in complete relaxation. It felt a little weird as I’ve never had this experience, especially when I tried to move my arms, which were tightly tucked in the blanket, but after a couple of a deep breath, I relaxed and enjoyed the therapeutic treatment. With the mud bath treatment, I was also given a stress-free relaxing massage, and I was content to succumb once again to the comforting treatment. Oh, this is Heaven! I remembered thinking. Afterwards, I headed for my third and last treatment of the day, the famous Cleopatra’s Bath, best described by the Spa director as “the ancient beauty secret recipe of Cleopatra for a rich and deep hydration, using luxury moisturizing creams enriched with aromatic essential oils from flowers and leaves to help the skin absorb in deep the humidity and the necessary nutritional ingredients. Immerse yourself in a special warm water bed and feel the absolute relaxation.” And that I did. Slathered in goat milk cream and wrapped up in a towel-lined plastic blanket, was again a new experience for me, and shortly thereafter, I was instantly submerged into a thermal waterbed bath! The whole treatment was magical! My skin felt so soft, and the rest of the day I felt a sensation of pure blissful relaxation. When evening came, we met the Mayor of the town and had a succulent dinner filled with numerous Greek entrees, every single one totally delicious!

Early the next morning, we departed for Port of Edispsos & Thermopylae, approximately an hour travel on the ferry. The day was sunny and warm as it has been since I arrived in Greece; and I enjoyed the views from the sea, taking in the beauty surrounding us. Next stop? Hotel Galini Wellness Spa nestled in a valley of eucalyptus trees, another splendid resort! There we were greeted by Mr. K. Bakoyiannis, Governor of Central Greece and Mr. N. Hardalias, General Secretary where we enjoyed a nice glass of wine and converse about our experiences from the places we’ve visited. This day was relaxing, at least for the next 5 or 6 hours, and as I enjoyed swimming in the thermal waters of our previous hotel, I figured I succumb my body to the same relaxation and healing treatment. After a few enjoyable hours at the pool, it was time to get ready and head over to the Atalanti Winery, internationally known for the Hatzimihali family wine label. We toured the vineyard, had a nice meal and even had the opportunity to mix our own potions.

The next few days were just as exciting as the days before. We visited the seaside spa town of Kamena Vourla where we enjoyed the majestic views of Mount Knimis before heading for the Mountain Region of Karpenisi. There we arrived at Hotel Spa Montana, which was to be our home for a couple of days. While in Karpenisi, we had the chance to visited the Monastery Prousou, only 31 kilometers south of Karpenisi and built inside a giant rock over a canyon, a truly impressive sight. The monastery is dedicated to Panayia Proussiotissa (Virgin Mary of Proussos), whose memory is celebrated every August 23rd. This historical and religious monument is today revered as one of the few still functioning monasteries in the area. After visiting yet another amazing site, we departed for traditional Greek Delicatessen “Stremmenou” known for their locally produced prosciutto, and we ate and ate! I remembered going to bed that night totally satisfied.

And today, its magical Delphi, one of the most important archaeological site in Greece, and second only to the Acropolis of Athens. Spectacularly built against the side of the Parnassus mountains, Delphi stands in all its glory. The ruins and their setting are spectacular; just imagine the wealth of architecture, oracle mystery, and treasures while standing in the footsteps of Alexander the Great, the King of Argos and the likes was magical! You can see the temple of Apollo, the ancient theater, the stadium, the sanctuary of Athena Pronaia with the Tholos, the Kastalia spring, and the various treasuries that adorn the sacred way. I also visited the archaeological museum which contained many important ancient Greek artifacts from the many excavations at Delphi. I was totally impressed by these ruins and the rich history behind them. Definitely, a must-see while in Greece. The following day, we visited Sparta and the monument of the Great Leonidas king of Sparta, the hero of the Greco-Persian war who helped the Athenians defeat the Persians with only “300” men. As I had studied the Spartan history, to me being at this place was an incredible feeling and to stand just a few feet away from such an impressive statue. 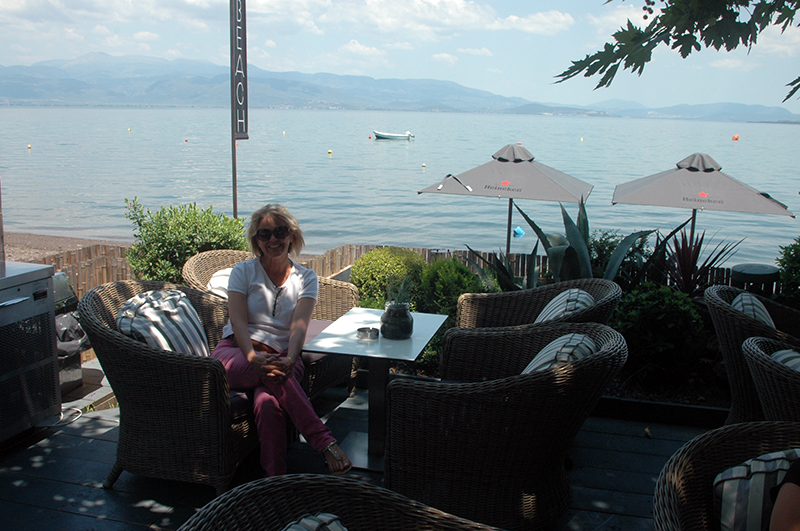 That night, after a long day visiting towns, we headed back to Hotel Spa Montana, had a nice dinner and turned in for the night as the next day was departure day. My experience through Greece was beyond exuberant! Everything seemed perfect, I truly enjoyed this beautiful country and I am ready to go back and recreate new memories once again! Are you ready for Greece? I sure am.