Bigger is better even in the air and Gulfstream’s G700 is reclaiming the title of largest private jet from its competitor Bombardier and their Global 7500. Debuted at the annual National Business Aviation Association’s (NBAA) corporate aircraft show in Las Vegas in October 2019, the G700’s cabin is two feet longer than its nearest competitor.

The flagship G700, priced at $75 million would be the “tallest, widest cabin in our industry,” said Gulfstream Aerospace President Mark Burns, with a cabin slightly higher and wider than Bombardier’s Global 7500. Its cabin length is 56 feet and 11 inches, with an additional 195-cubic-foot baggage area, standing six feet and three inches high and measures eight feet and two inches wide. Although the G700 stretches to a near 109 feet, it is noteworthy that it will actually be shorter than Bombardier’s Global 7500. 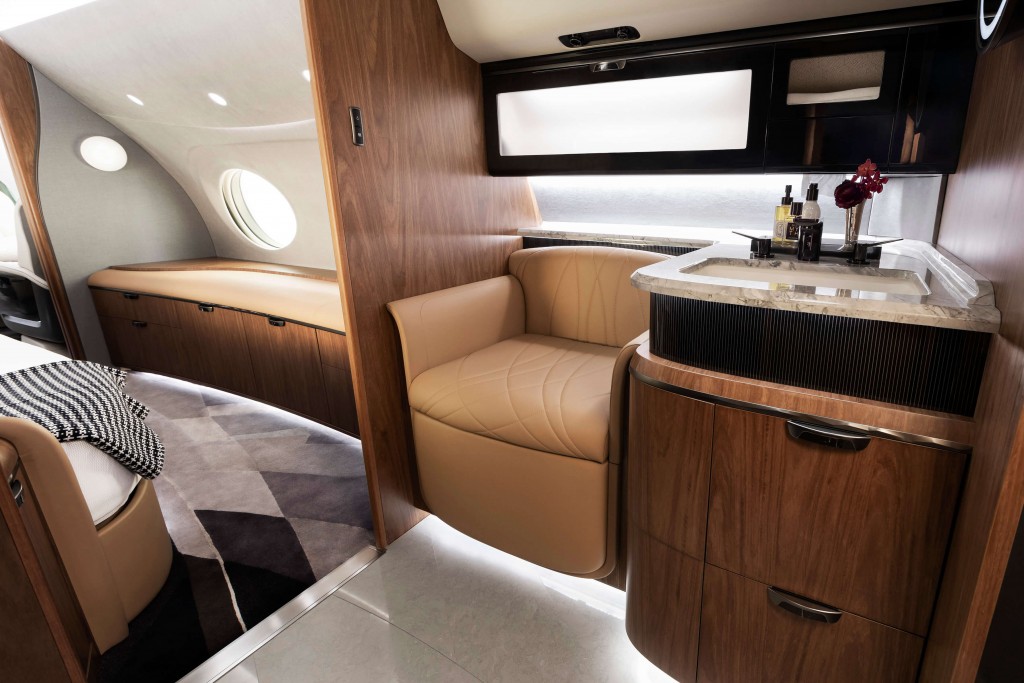 Seating up to 19 passengers and sleeping up to 13 passengers, the jet features five living areas, a 10-foot galley and a master bedroom suite with shower and a six-seat dining area which can easily be converted into a conference room. Ensuring maximum comfort and sophistication in the air, their all-new seats are from their handcrafted collection and convert into ergonomic beds. Positioned near the large windows and near tactile cabin controls, purchasers have the ability to have the most innovative and flexible cabin in the industry.

Further features include: complimentary Jet ConneX Ka-band WiFi, an advanced circadian lighting system that recreates sunrise and sunset – which Gulfstream claims can reduce jet lag after flying through time zones – the ability to be pressurized to the lowest altitude in the industry, it circulates 100 percent fresh air all in a luxurious  whisper-quiet cabin with the largest oval windows in the air.

Powered by two Rolls-Royce Pearl 700 engines, the jet can fly 7,500 nautical miles at Mach 0.85 with a maximum speed of Mach 0.925, sharing the leading mark set by its predecessor the G650. Gulfstream meets perfect symmetry of size, design, power and technological achievement with its award-winning Symmetry Flight Deck with intuitive touch-screen avionics, paired with Phase-of-Flight™ intelligence.

Gulfstream says deliveries will begin in 2022.

Jarone Ashkenazi
Following being published on Fast Company as well as Wired Innovations Insights, Jarone expanded his writing portfolio to cover luxury travel, goods, unique experiences along with restaurants and lifestyle articles for numerous websites. From luxury hotels, all-inclusive resorts and VIP experiences, Jarone has written about exclusive properties only offered to the discerning traveler and consumer. Jarone is a native to Los Angeles and spends his free time traveling, playing sports and is always up for an adventure.
Previous articleMeaningful Talismans
Next articleGrace Lee’s Demi Collection Is A Modern Spin On A Classic Gold Band