We live in a world of increasing complexity and concern for the environment, hence the advent of hybrid vehicles. While you’re Toyota “Prius” will give you environmental bragging rights, it lets you down on style, speed and desirability. To solve this we have hypercars such as the Mclaren P1, Porsche 918, and the LaFerrari whose million dollar plus price tags, limited production, and out of this world performance allow you to have your environmental cake and eat it too. So it is only fitting that the yachting world should have their own Hyper-Yachts; demonstrated quite spectacularly by the 282 foot hybrid design concept Trimaran “Komorebi, which was unveiled at the 2015 Monaco yacht show. 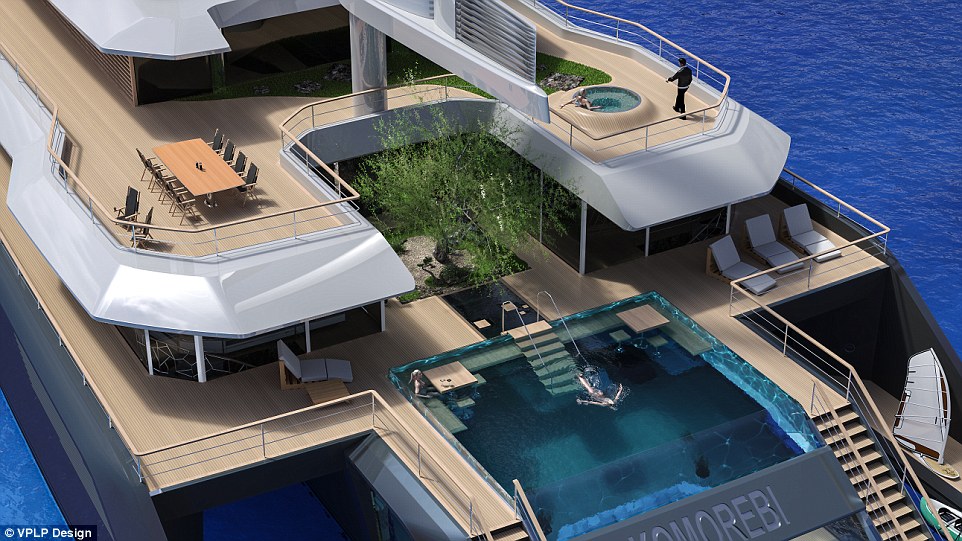 “Komorebi” is the brainchild of the French based naval architecture firm VPLP, owned by Van Peteghem and Lauriot Prevost.  VPLP is renowned for their many sailing and racing accomplishments. In 1994 they built the racing Trimaran made famous by the movie” Waterworld” starring Kevin Costner. For 2010 they designed BMW Oracle which won the 33rd Americas Cup. VPLP has created an annual concept design to showcase new ideas to enhance the splendor of sailing. “Komorebi” is the latest creation concept to emerge from the design offices of VPLP. 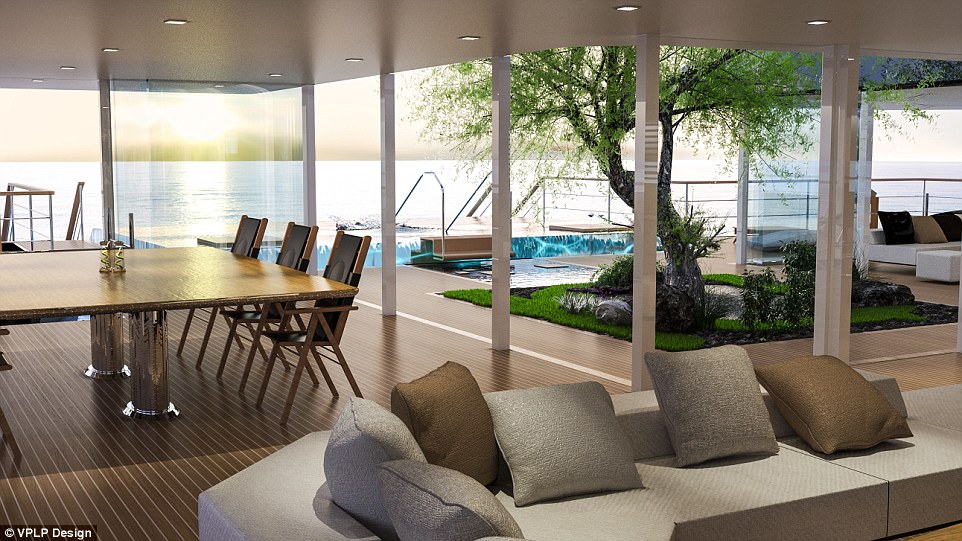 So first things first, what is a Trimaran? A Trimaran is defined as a multi hull boat that comprises a main hull and two smaller outrigger hulls (or floats) which are attached to the main hull with lateral beams.  The “Komorebi” takes this basic concept and moves it to a whole new level of design, luxury and hybridization.  The “Komorebi” is a 282 foot motor assisted sailing Hyper-Yacht. The two large automated vertical wing sails can power the “Komorebi” up to 15knots in 20 knots of wind without the use of her engine. When in hybrid mode using sails and engine she is projected to average at least 30% in fuel savings. Solar panels arranged across the yacht allow for regular recharging of her batteries and gives her a range of 6000 nautical miles. Thanks to its shallow draft of 2.8 meters and an airdraft of 50.2 meters “Komorebi” can enter most popular ports without any difficulty. 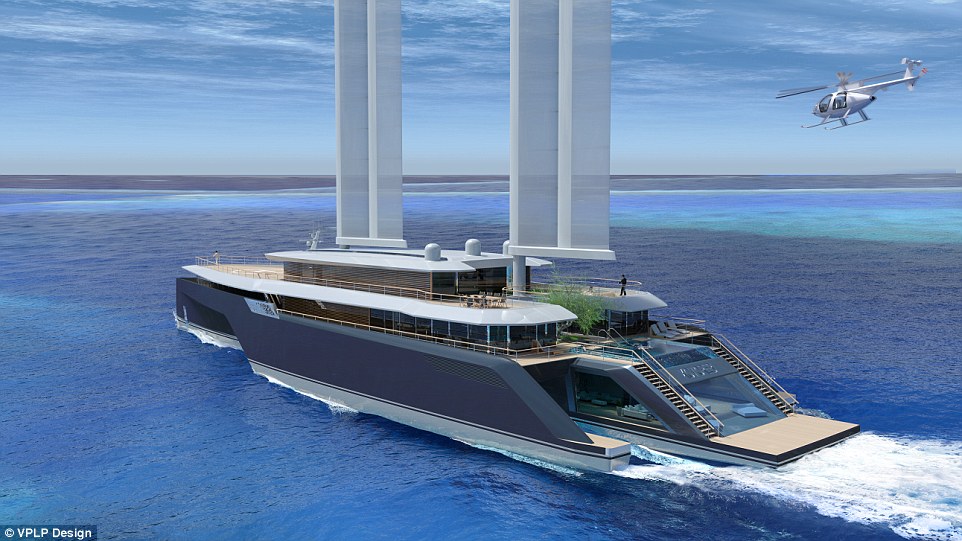 In Japanese “Komorebi” means Curtin of Light, which is a concept of time when nature is enhanced by the sun’s rays. This epitomizes “Komorebi’s” use of floor to ceiling windows that spread natural light throughout the boat. Open floor plans dominate the main deck providing room for a swimming pool, a hot tub and a garden with a living tree. The interior has been described as an Asian-inspired Frank Lloyd Wright design, and thanks to the generous space on board privacy is guaranteed.  Guests/Owner may enjoy an interior beach club and an exterior skydeck that provides space for alfresco dining and entertaining. 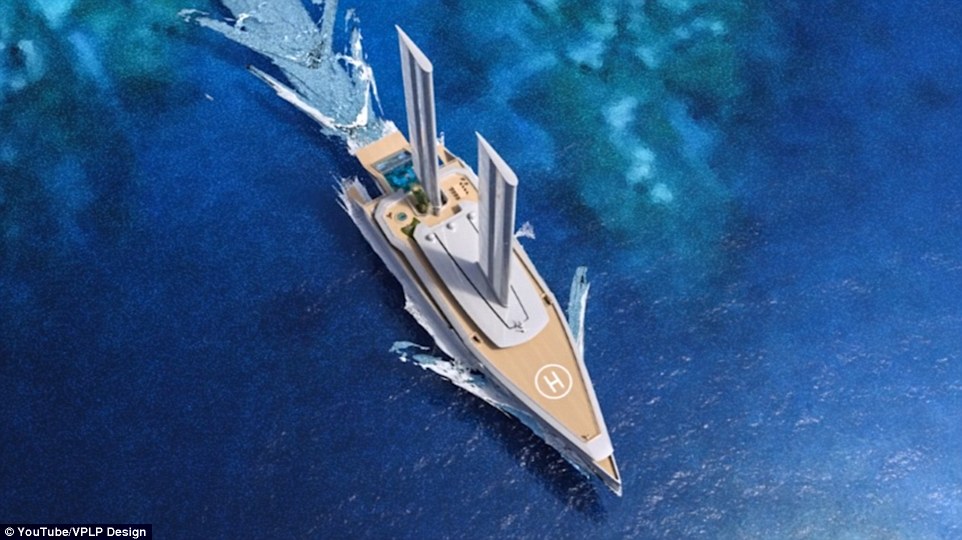 Twelve guests can be comfortably housed in staterooms on the main deck.  An entire deck below the main deck is reserved for the owner and up to four children. This section enjoys its own private lounge. The “Komorebi’s” crew of 20 are housed in quarters on the lower 3rd deck. A helicopter landing pad is located at the front of the yacht. 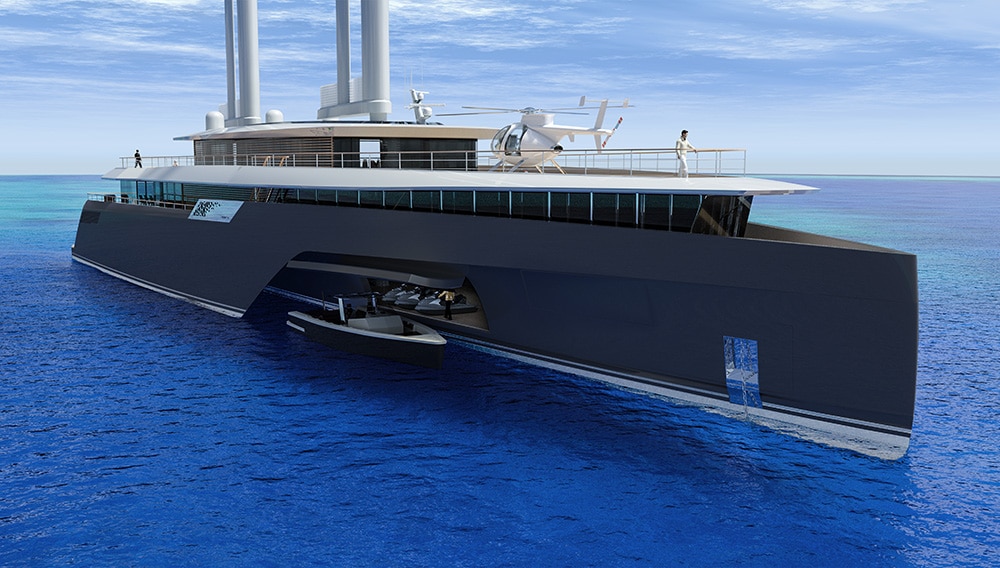 In the central hull is the Tender garage, that hides a small navy of tenders (a boat which are used to service or support a yacht by transporting people /or supplies to and from shore), sailboats and of course one’s personal submarine.  Of course it would not be a Hyper-Yacht without a submarine. 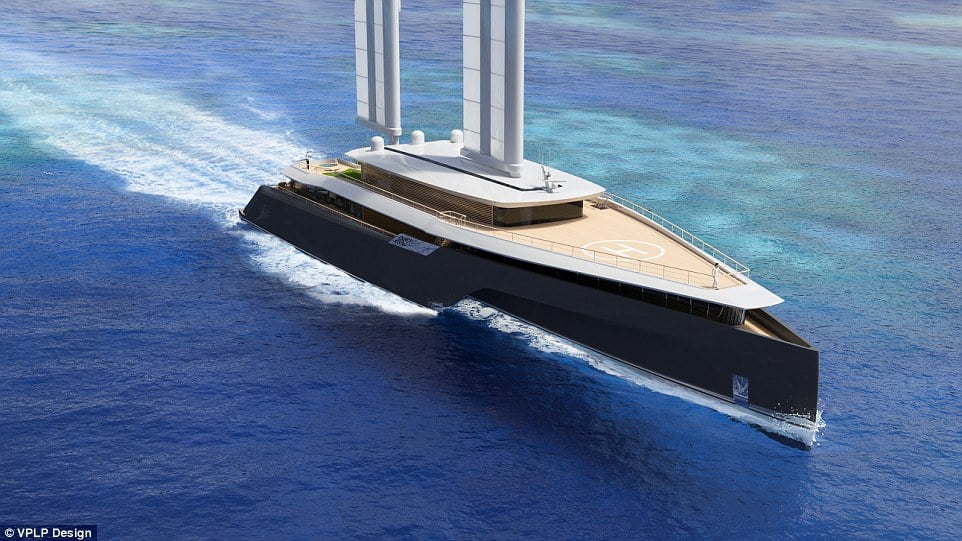 Hybrid-Yachts are one the latest trends thanks to new environmental regulations and increasing pressure on the yachting industry. Guillaume Rey from VPLP articulates that the hybrid Trimaran is the perfect answer to comfort at sea, space, stability, and low running costs. “Komorebi” is the quintenessence of what we think of yachting, luxury and space. Now all we need is the billionaire to commission “Komorebi” and for me to offer myself as the first guest.