Time continues moving forward, but special moments are never forgotten. That’s especially true for celebrated champion and Rolex Testimonee, Meredith Michaels-Beerbaum. Born on December 26th in LosAngeles, California, Michaels-Beerbaum is the first woman show jumper to be ranked world number one. Her career is a catalogue of remarkable achievements–each one reflecting a special moment in time.

Michaels-Beerbaum first started showing signs of success in 1983, at the early age of 14. Competing in the Senator’s Cup at the Washington International Horse Show, an amateur competitiion for the best young riders in the United States; the then teenager rode an ex-grand prix horse in the event, a horse she had been saving especially for this competition. “I never forgot that moment because I won and the price was a gold Rolex watch, my first ever” 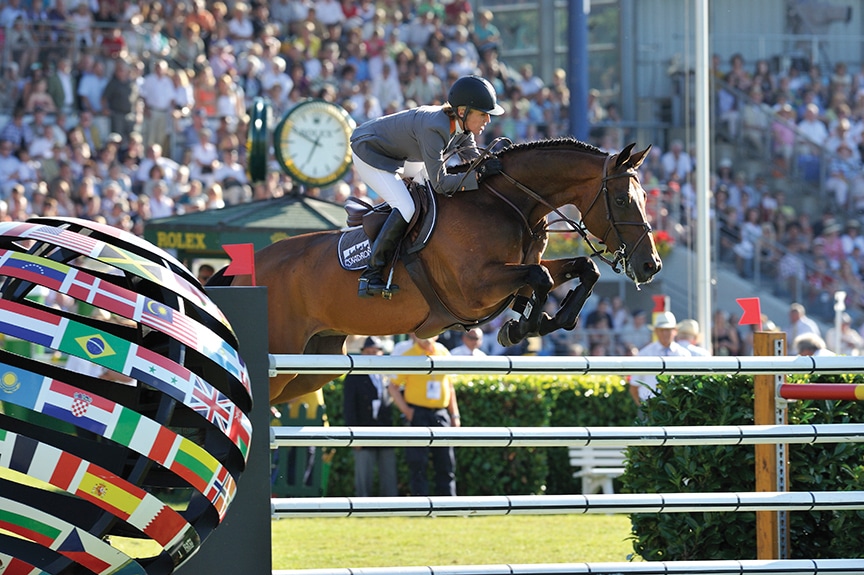 Growing up in California, she always dreamed of winning a gold medal at the Olympics: “I still have a short autobiography, which I wrote at school as a10-year-old. I had to explain in the essay what I wanted to achieve in the future. I stuck a photo of a show jumper on the page and put a caption underneath saying ‘Meredith Michaels wins Olympic gold’.” “The 1984 Games were held in Los Angeles, and for me, that represented the pinnacle of athleticism. My step-father bought tickets to the final of the show jumping, but unfortunately, we misread the start time on the day of the event and actually missed the competition–it was terrible!”

The US team went on to win gold that year and the then 15-year-old Michaels Beerbaum watched every moment on television. It was many years later, after marrying German show jumper Markus Beerbaum and becoming a naturalized German, that she finally fulfilled her dream of riding at the Olympics, first in Beijing in 2008, then London in 2012 and most recently in Rio. This year, Michaels-Beerbaum helped the German Team win Bronze in the show jumping competition, adding another medal to her ever-growing cabinet of success.

Michaels-Beerbaum says she keeps all her equestrian mementos from the past, although some are still at her family home in the United States. “I came to Europe in 1991to turn professional with only a backpack on my shoulder and a pair of spurs in my hand. But I have won plenty of trophies since.” 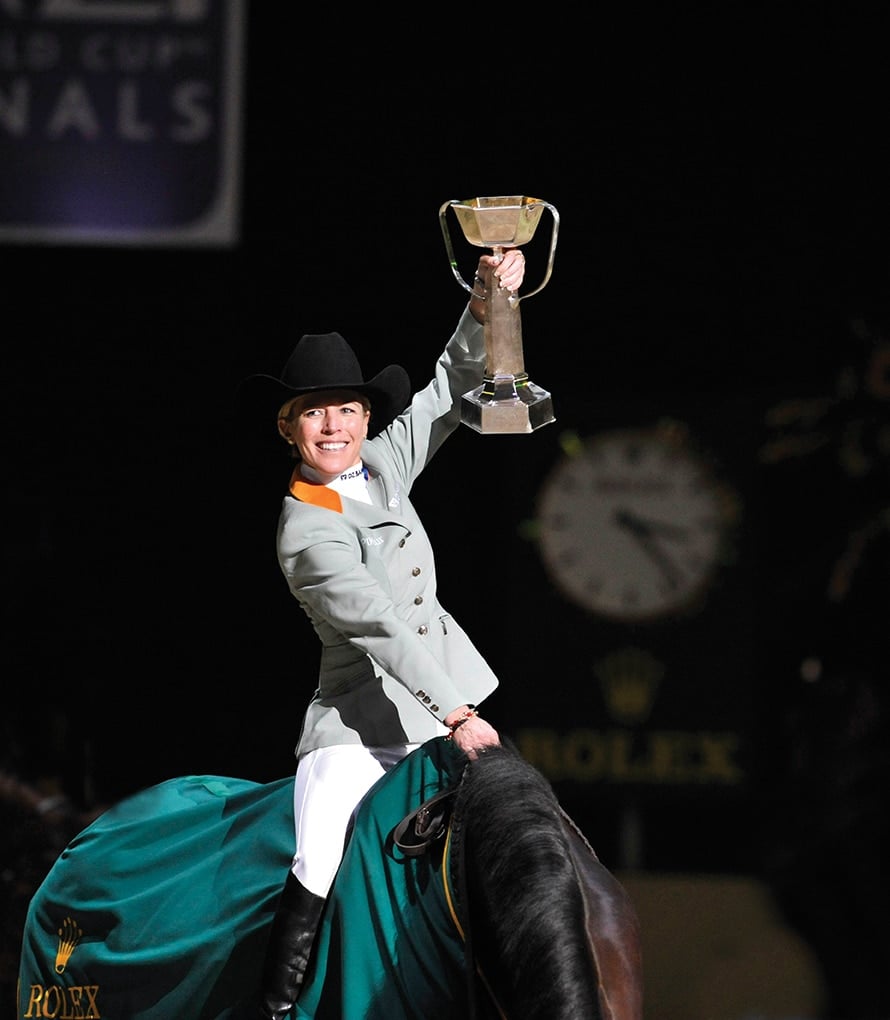 She trained at the stable of legendary German rider Paul Schockemöhle, in Mühlen, Germany, planning to stay for only one summer, but it soon became three and the start of a new life in Germany. It was during that time that she met Markus Beerbaum, her husband to be.

Europe was certainly the most significant catalyst in my career; the second was changing my nationality and becoming German–that was a major decision. One underlying memory that I attribute to that moment is the number of people telling me how a woman would never, ever be put on the national championship show jumping team in Germany. Fortunately, they were wrong.”

Michaels-Beerbaum’s parents were very supportive of her staying in Europe and quitting her studies at Princeton University. “The hardest part for them to accept was when I decided to change my nationality and become a German,” she says.

AfterMichaels-Beerbaum’s move, her riding career quickly went from strength to strength. “My first professional win was the Maastricht Grand Prix. There was no prize money but I won a city car. I was the happiest person on the face of the earth.” A string of achievements followed and her exceptional results were recognized in 2005, with an invitation to become a Rolex Testimonee.

“I was one of Rolex’s first equestrianTestimonees–it was a great honor to be welcomed into the Rolex family and associated with such a prestigious brand. I was lucky enough to win my first Rolex watch when I was 14, so I knew the importance of the Rolex name. Only the very best sportsmen and women are invited to represent Rolex and that meant everything to me,” says Michaels-Beerbaum. 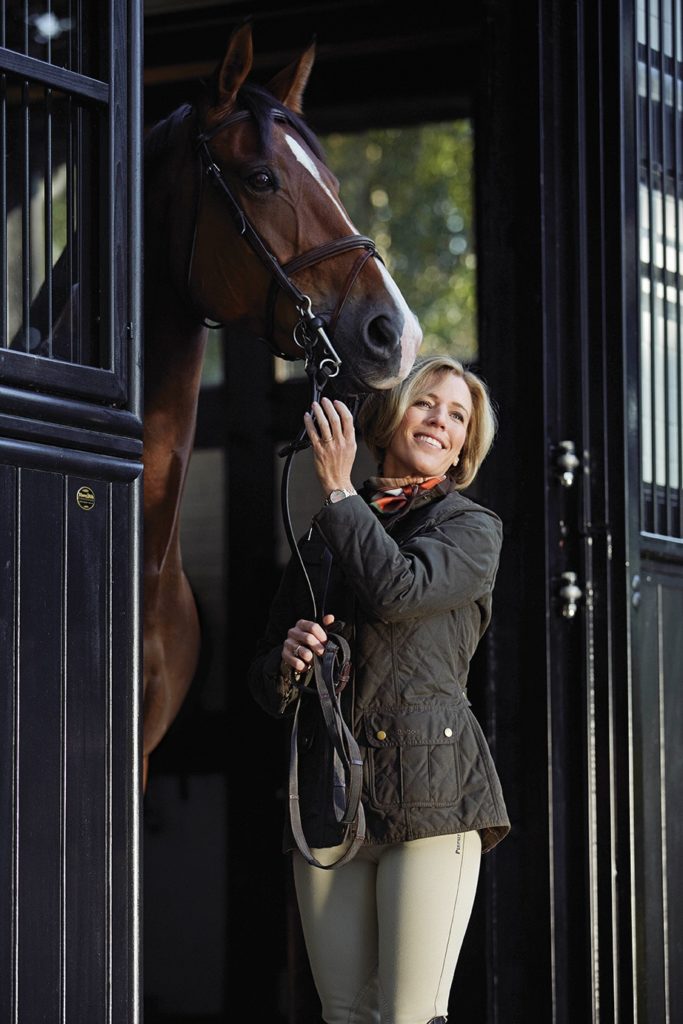 “My second World Cup Final win in Las Vegas was my most perfect victory. I won each of the three legs, and my horse Shutterfly and I jumped without any faults. It was also an extremely emotional time for me, as my step-father passed away at the age of 69 just six weeks before the show.

He was one of the main reasons why I was where I was in the sport – he supported me for many, many years! He was the one who took me to horse shows and spent all the money that he had to buy me horses.” Since winning her first watch in 1983, Michaels-Beerbaum has built up a collection of Rolex timepieces, each one witness to her glittering career. “I always wear one of my Rolex watches when I’m riding, and I tend to rotate them every 3 to 4 months. I definitely see them as my lucky charm,” she claims. “Away from show jumping, if I go scuba diving, I will make sure that I put on my Yachtmaster.”

“Without a doubt, my favorite Rolex watch is the Datejust in white gold, which I won at my second World Cup Final victory in Gothenburg in 2008. Engraved with ‘Rolex Champion’ on the back, it’s a watch that reminds me of one of my most glorious moments as a show jumper. I remember the Final because I entered the arena knowing that I couldn’t afford to knock any fences down. Many of the other riders hit the last fence, so I had to go clear to win. To make matters worse, Shutterfly was so nervous in the warm-up ring that he refused to jump! He was very sensitive and he could feel the tension but I just trusted him and we went into the ring and made it happen!” 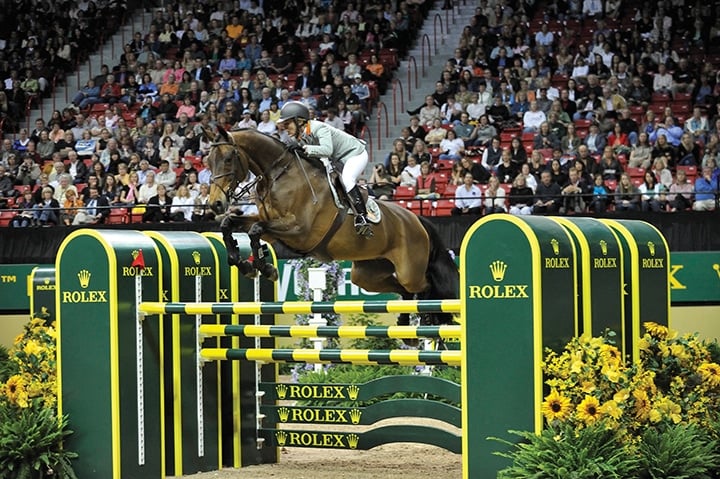 In February of 2010, a new chapter in Meredith’s life began when she welcomed her daughter Brianne Victoria to the world. Despite her concerns about returning to the saddle, in September 2010 she was competing at the 2010 Kentucky World Equestrian Games and even won Team gold.

Given Michaels-Beerbaum’s long term affiliation with Aachen, it was only fitting that in 2011 she retired her globally renowned and much-loved horse, Shutterfly. He was the world’s most successful show jumper and to get her they reached the very pinnacle of the equestrian sport. Even with Shutterfly stepping down from elite competition, Michaels-Beerbaum continued to retain her status at the highest level, and in 2015, she leads Germany to Team silver at the European Championships in Aachen.

“I went into the competition with a brand new horse, Fibonacci. I think we were both nervous but the horse was fantastic! I had two mistakes, without them, I definitely would have been on the individual podium. I was so pleased the Team won the silver medal. I also took huge strength from the performance of Fibonacci,” said the champion rider.

World number one for 24 months, and the first woman in history to represent Germany in a Championship event, Michaels-Beerbaum accomplishments have set a precedence for successful and aspiring show jumpers around the world. Her continued pursuit of perfection is synonymous with Rolex and reflects its core values of excellence and precision.

| Written by Celina Fazio How do you become one of the top-ranking family office executives of Forbes-listed billionaires? Simple. You just have to get the...