Technically speaking dreams are the stories that the brain cells during sleep. Their meaning is viewed individually in many forms. Whichever the view, there is a certain type of dream that since childhood has told the tale of an upcoming event. Bridal dreams. Our bridal dreams have propelled us towards a possible relationship and a lifetime commitment with/to another human being.  The event of your life and the love of your life intertwined together.  But there other things that come with that alluring bridal dream. The emotional and physical pressure of planning for one; but above all, there is one thing that ranks highest within this dream; The Wedding Gown.  The wedding dress is the most important part of the bridal vision.

While contemporary weddings are often a symbol of love and commitment between the bride and the groom, for most of history, weddings were more like a business deal in which two families joined forces for a beneficial arrangement or alliance. Brides rarely purchased a dress specifically for their wedding day. The bride would typically wear her finest dress to the ceremony, even if they were dark colors. Many brides wore black during this time. Only a few colors were avoided, such as green, which was then considered unlucky. Blue was a popular choice as it represented purity, piety and a connection to the Virgin Mary, plus the dark color easily hid stains and imperfections and could be worn again. 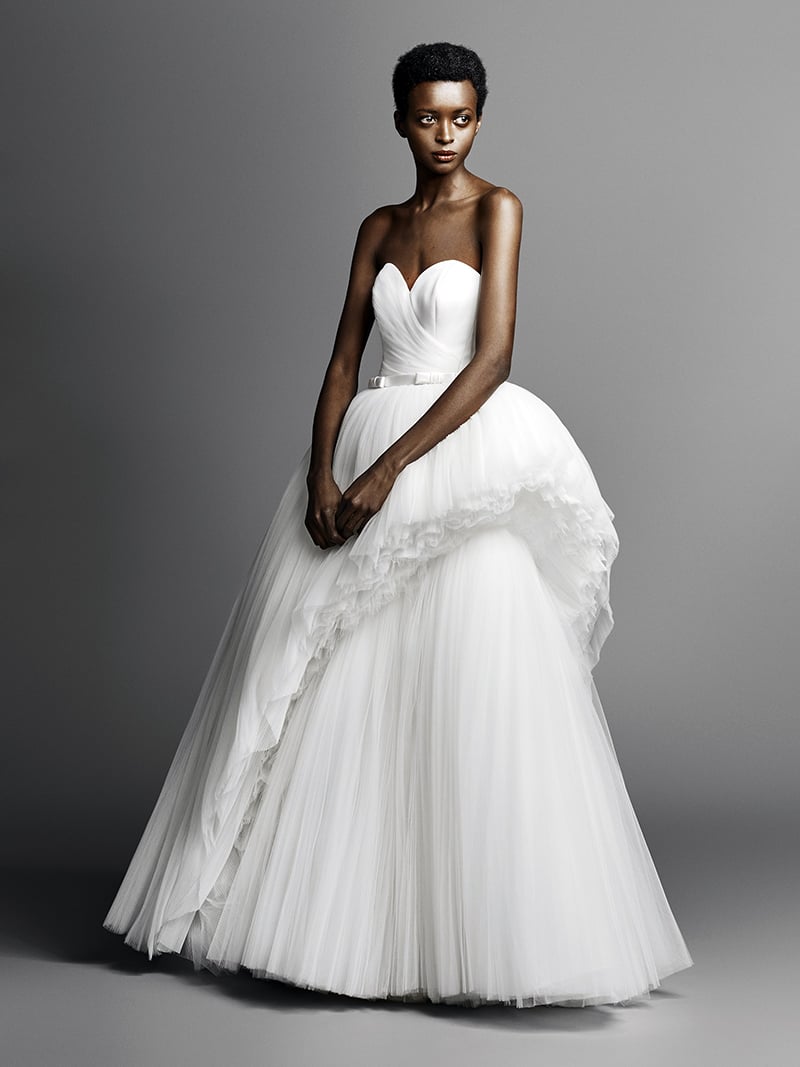 Though examples of brides wearing white can be traced back as early as 1406, it was Queen Victoria who broke the status quo at her 1840 wedding, to her cousin Prince Albert when she rocked a lacy, ivory-colored silk satin gown. She also ditched a crown for an orange blossom wreath.

Dripping with orange blossoms, her stunning white dress inspired thousands of common folk to follow suit. Almost a decade after the wedding, Godey’s Lady’s Book, one of the first women’s magazines in America at the time, declared that white was the most fitting hue for a bride.

From then on, brides interested in showing off their wealth and social rank made sure to wear white dresses made from excessive amounts of fabric (made that much easier following the sewing innovations brought forth by the Industrial Revolution).

Since white was a hard color to obtain and preserve, only wealthier women could afford such a dress. Still, white dresses worn during the 1800s were a far cry from eggshell, as at that time people lacked the necessary means to bleach fabrics.

The white-dress trend grew scarce during the Great Depression when times were hard and it was difficult for most people to spend money on a gown they would never wear again. Instead, brides returned to the tradition of wearing their best outfit, which was usually a darker color instead of white. Following an economic boom in the second half of the 20th century, white became a popular color once more, as evidenced by the weddings of Grace Kelly, Princess Diana and in the 21st century other iconic women like Catherine, Duchess of Cambridge who married in white, continued the inclination.

In Chinese, Indian, and other Eastern cultures, brides often wear red or a white-red combination, as the color red symbolizes auspiciousness and good luck. In Japanese weddings, brides often don multiple colorful dresses throughout the ceremony.

While white remains the go-to hue for brides around the world, these days, brides can choose from millions of colors and fabrics for their walk down the aisle and for the following celebrations. Brides are stepping away from tradition and choosing a dress simply because they like the color. However, all colors have meaning. They each represent certain feelings, emotions, and states of mind.

Some popular bridal colors; White & Ivory: White is associated with light, goodness, innocence, purity, and virginity. Nowadays brides go for ivory because it looks better than white on their skin.

Red: Excitement, energy, strength, and passion. Many different types of cultural-based weddings are set in red.

Some memorable colored bridal gowns have come designed by Vera Wang who has delighted us with sublime creations.  Although a couture gown from Ralph & Russo could match its splendor.

Fashion is a representation of a dream and bridal wear is a dream within a dream. Designers usually stage two seasonal bridal shows a year. Fall and Spring.  New York plays stage to this mega-market. Starting with seasonal shows and following with market week, where buyers from boutiques around the world place their orders for the upcoming season. Of course, Europe also releases its bridal collection around the same time with the Pronovias show in Spain leading the schedule.

One of the most lucrative and intense parts of Bridalwear is Bespoke or made to order. This is often sought by the bride to be who wants a one of kind dress and to who a seasonal collection is not a priority. A costume dress can take (just like a baby) up to nine months or more to be produced. It requires an average of 3 fittings or more and everything is detailed and approved by the bride. With the help of the fashion house, this is where the bride dreams her dress into life. “A dream with a dream”

Although there are so many aspects to consider in the search of the perfect flock, the decision has been made easier by adding more options.

As the evolution of the modern woman continues, styles and silhouettes have become diversified. Brides are getting more comfortable experimenting with new lengths and silhouettes, and many of them are buying more than one gown for their rehearsal dinner or reception.

At the same time, designers who work in both fashion and bridal aspects of the industry are starting to break down the walls between the two worlds. Instead of establishing completely separate visions, they’re letting the standout pieces and themes from the runway influence their bridal lines and vice versa. Some of the Spring 2020 gowns took that quite literally, like Victor & Rolf.  Since 2017 Victor&Rolf has redefined shape on each of their after bridal collections. Nailed a tricky balance: Even the most avant-garde creations have a pure, stripped-back quality, so they’re exquisite, yet timeless; artful, but not overpowering.

Some brands are exclusive to Bridal such as Berta who focuses on the It-Girl costumer, Ines De Santo, Denille Frankel, Suzanne Neville, Michael De Paulo, etc.

Others come from established fashion houses who otherwise focus on RTW, Couture and such, but have a Bridal extension of the brand. Some favorites are Oscar De La Renta, Marchesa, Carolina Herrera,  Saiid Kobeisy, Elie Sabb, Ashi Studio, Jenny Packman, Victor & Rolf, Christian Dior and so on. This fashion houses dedicate en entire separate atelier for their Bridal design.

Accessories like veils have not lost horsepower. They remain a preferred choice for 85% of brides according to Bridal Queen publication Grace Ormonde.

The groom, of course, plays an important part in this dream, yet, unlike the many trends and traditions tied to wedding gowns, for most of history, the groom’s only requirement has been to dress in a way that matches the bride’s gown. Isn’t he lucky!

TELL IT TO THE WORLD

Wedding announcements at The Times are as old as the paper itself: The debut issue of the newspaper, on Sept. 18, 1851, also debuted “Weddings” — at the time a single line proclaiming the union of Sarah Mullett and John Grant. Both were from prominent families, and for more than 100 years the section more or less stuck to that rule, remaining the purview of privileged society figures. Now in days being included in the LOVE’s New York Times section goes hand in hand with being included in Town & Country  Magazine or your city newspaper. Additionally, Instagram and other social media outlets can help you globalize your audience.

While some dreams can turn into nightmares. A bridal dream doesn’t have to. The key is to be open-minded and delegate. To be present and rise about the clouds as if you can fly. Anything is possible. After all, isn’t it, your dream?

Gerard Vallecello
Gerard Vallecello is a columnist, a personality, a stylist, and creative director based in New York. Attended Rhode Island School of Design and contributes to publications in the US and the UK. He is a notable member of the fashion community.
Previous articleSugar Ray Leonard Lists His LA Estate!
Next articleKelsey Grammer’s Malibu Mansion