The art of rail travel takes one back to a bygone era of slow-moving, stylish voyages from your departure point to your destination. Upscale Living magazine’s Travel Editor has found The Most Extraordinary Train Journeys where sophistication and luxury go hand in hand. 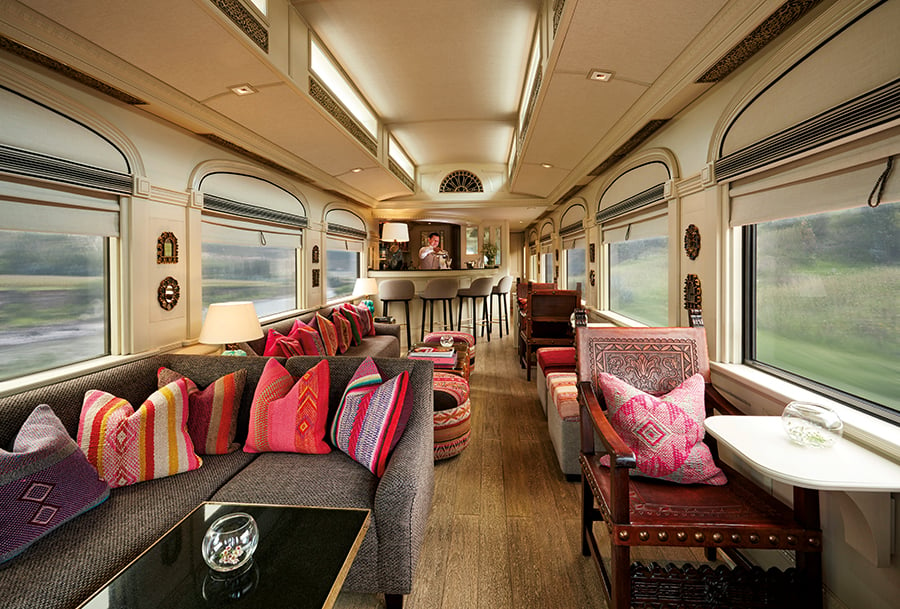 Launched in May 2017 as South America’s first luxury sleeper train and one of the highest train journeys in the world, Belmond Andean Explorer traverses the Peruvian Andes from Cusco to Lake Titicaca and Arequipa on one- and two-night journeys.

The elegant carriages take guests through some of the most breathtaking scenery in the world; offering vast, uninterrupted views of snow capped-mountains, enormous skies, majestic lakes, and herds of alpacas, llamas and vicunas grazing on the altiplano.

Interior designs reflect Peruvian culture, mixing vibrant colors with natural tones, and large picture windows that offer the perfect vantage of the ever-changing scenery of the Andes.
Anticipate a series of unique dining experiences against a backdrop of spectacular mountain scenery. Aboard Belmond Andean Explorer, sample the full spectrum of Peruvian flavors in the hands of acclaimed chefs. Besides delicious lunches and nightly feasts, enticing breakfasts each morning fuel your daily discoveries. The dining cars’ interiors showcase muted hues and luxurious leathers that mingle with artisanal millwork. Polished macramé divider screens keep culinary adventures as intimate as you wish. After dinner, explore the boutique for a memoir of your adventure.

There are two bars in the Lounge Car and an Observation Car. From the semi-open Observation Car, guests can enjoy the scenery with an outdoor terrace that becomes the social hub of the train by night. The train also features a dedicated spa carriage with treatments that feature an exclusive Andean collection made of local, natural ingredients as well as the renowned Germaine de Capuccini collection. 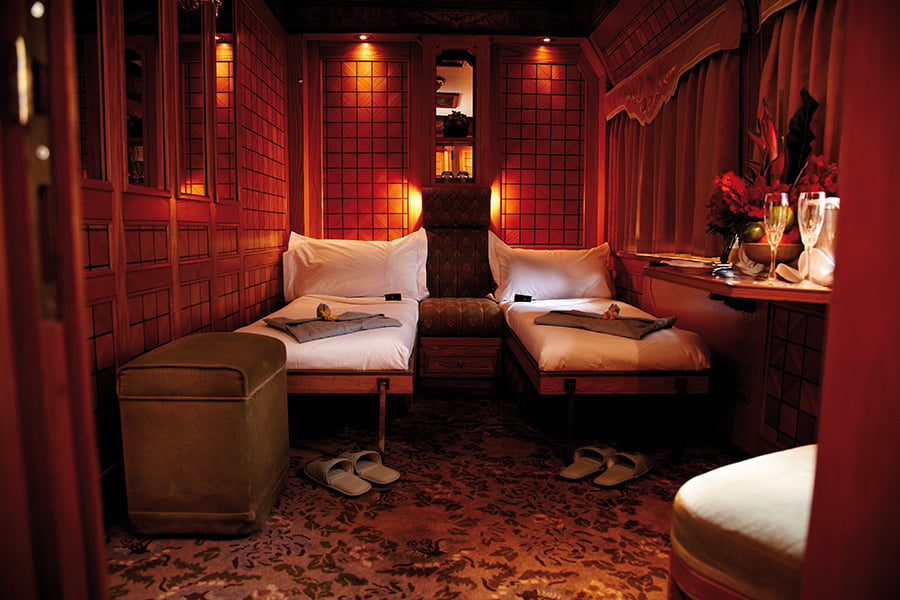 Eastern & Oriental Express was the vision of American businessman James B Sherwood, Founder and Chairman Emeritus of Belmond, who purchased the carriages of the Silver Star train operating in New Zealand. The carriages were then transferred to Singapore and remodeled to highlight the spirit of classic Indochina with a colonial aesthetic.

The train made its inaugural journey from Bangkok to Singapore in September 1993. It is the first train ever to transport passengers direct from Singapore and Kuala Lumpur to Bangkok. Prior to its launch, passengers would have to transfer trains when crossing the border between Malaysia railways to Thailand railways (or vice versa) as the railroads were built and maintained separately. An agreement was reached in summer 1991 between Eastern & Oriental Express, Malaysia railways, and Thailand railways to allow a single train to travel the full distance. Accommodation on the train is simply superb – behind the glossy green and cream livery of this luxury train are interiors full of intriguing details and romance. Intricate marquetry, fine fabrics, and vintage touches will leave you breathless.

A fabled journey through the exotic East awaits when you step into the world of classic glamour as you travel between ancient wonders and cosmopolitan cities. There’s a certain magic to this voyage, combining adventure with total relaxation. Handsome green and gold carriages conceal magnificent cherrywood paneling, Thai silk, and Malaysian embroidery. Raise a toast as you meander past lush jungle, ancient temples, and quaint villages. Some journeys deserve to be savored. 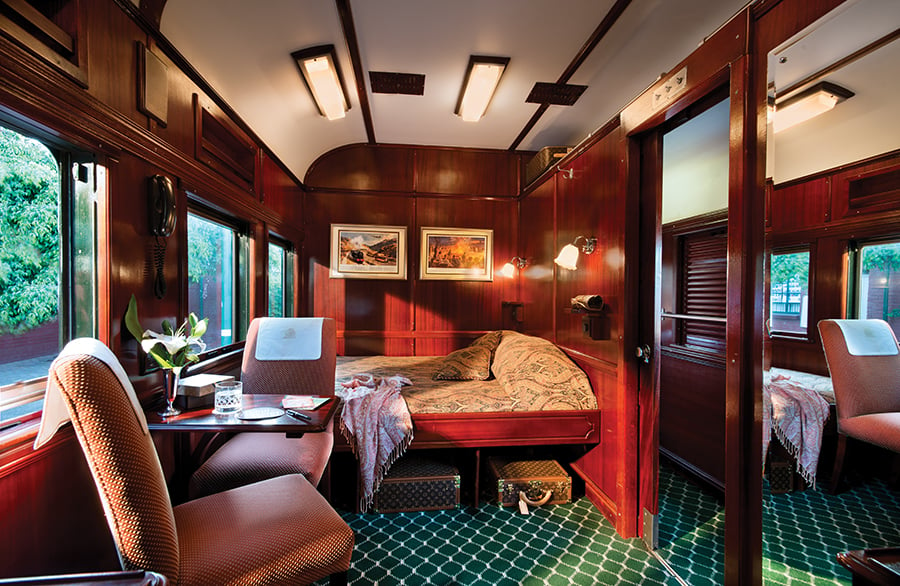 Celebrating three decades as the Most Luxurious Train in the World, Rovos Rail didn’t start off as a runaway success. “It took a decade for the company to break even,” says Rohan Vos, owner, and CEO of Rovos Rail Tours. “We managed to side-step bankruptcy more than once. I was inexperienced and had no idea just how expensive trains would be to operate.”

With perseverance, this family-run business launched its first overnight journey with a seven-coach train to what was then the Eastern Transvaal and have through the years expanded exponentially. Rovos Rail now offers eight trips around Southern Africa with more trains that can accommodate 72 passengers. Journeys range from 48 hours to 15 days with the newest route, Trail of Two Oceans, successfully completing its maiden voyage on August 2019 from Dar es Salaam to Lobito in Angola and back again.

It was the first time in history that a passenger train traveled the east-to-west copper trail. “Our new route coincides nicely with our 30th birthday. I’d like to say it was planned but I can’t take credit for the serendipitous timing,” Mr. Vos explains.

A maximum of 72 guests are accommodated in three variations of suites onboard Rovos Rail. Meals are served in one sitting only in the dining cars and are complemented by a selection of fine South African wines. Traditional dishes are prepared with the freshest ingredients, with proudly South African fare like game and milk tart on the menu. 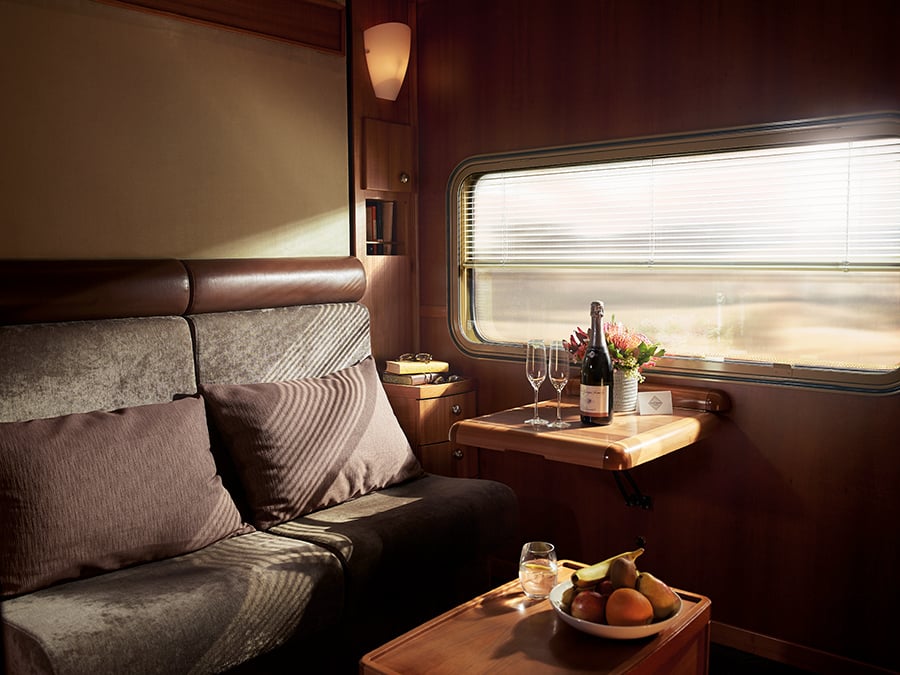 From the moment you step aboard The Ghan, you can feel it. You are embarking on the trip of a lifetime, a folkloric journey. The incredible kilometer-long train that transports you on two different journeys – Darwin to Adelaide and Adelaide to Darwin is a 360° travel experience melding fine food and wine, amazing excursions, sumptuous comfort, and wonderful camaraderie.

This famous transcontinental journey will take you through the outback, the tropics, farmlands, and cities for an unforgettable holiday experience. Your journey is not just the ultimate showcase of the incredible diversity of the Great Southern Land, your experience and enjoyment of the amazing landscapes and environments you’ll see is enhanced by interactive Off Train Experiences that physically connect you with each landmark destination on this epic journey.

Tailored to complement the train timetable as we move through the heartland of Australia, these immersive activities are included in your fare. Take your pick from a range of excursions designed to suit your level of fitness and personal interests.

For your dining pleasure, The Queen Adelaide restaurant, named after the monarch who was the consort of King William IV in 1836, encompasses the style and ambiance of the art deco that salutes the golden era and romance of rail travel. When your menu can offer top-end barramundi, locally-produced beef and lamb, Margaret River cheeses, Barossa Valley smallgoods and native Australian fare including kangaroo, saltbush and wild rosella flower, it’s hard to imagine you could be thousands of kilometers from the nearest hatted restaurant. 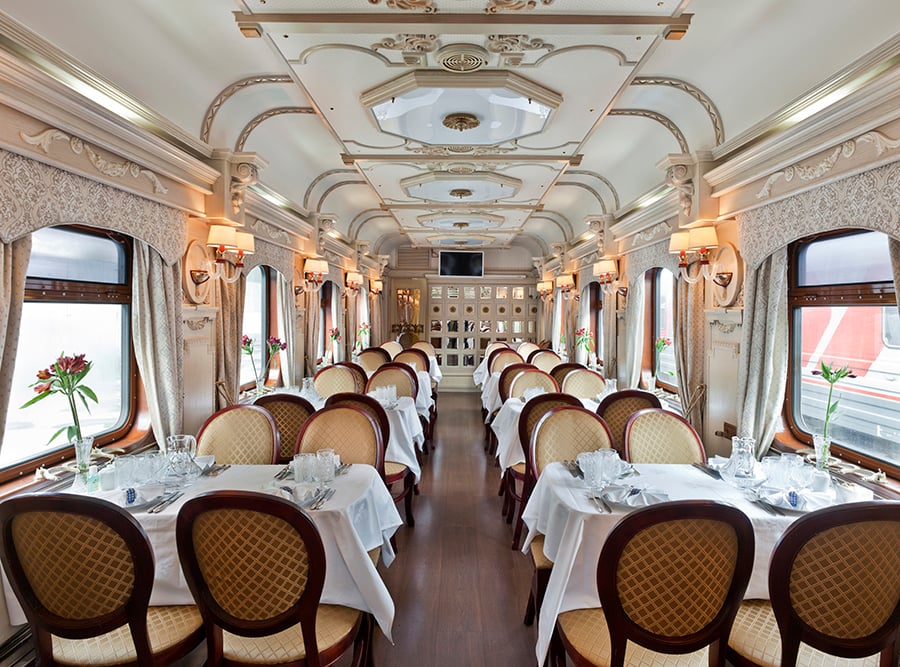 From the moment passengers step on board the Golden Eagle hotel-on-wheels, they can relax in the knowledge that everything is taken care of. Expect fine dining menus, a fully guided sightseeing program, cabin attendants and even an onboard doctor. Private en-suite cabins provide a sanctuary while the elegant Bar Lounge is the place to meet like-minded travelers. A variety of on-board activities are available too, including Russian language classes, vodka tastings, lessons on improving photography skills and talks on local history.

Undoubtedly the world’s greatest railway journey, the Trans-Siberian Railway runs like a steel ribbon across Russia connecting the east with the west. At 9,288 km in length, it is the longest single-service railway in the world and crosses eight time zones as it weaves through Russia’s vast and little-visited interior, over the Urals and across the steppe. Opened in stages between 1891 and 1916, this extraordinary engineering achievement is a vital link for the many communities that live close to the line, and it also allows passengers to draw back the veil and glimpse the cinematic landscapes of this mysterious part of the world.

Journeying along the Trans-Siberian line from Moscow to Vladivostok, disembark to visit the picturesque city of Kazan, the modern Soviet city of Novosibirsk and the ‘Paris of Siberia’, Irkutsk. The Golden Eagle then detours along the shores of Lake Baikal, the deepest lake in the world, and into Mongolia to explore its capital, Ulaan Baatar, ahead of arrival in Vladivostok and covers a massive 6,835 miles over two weeks. 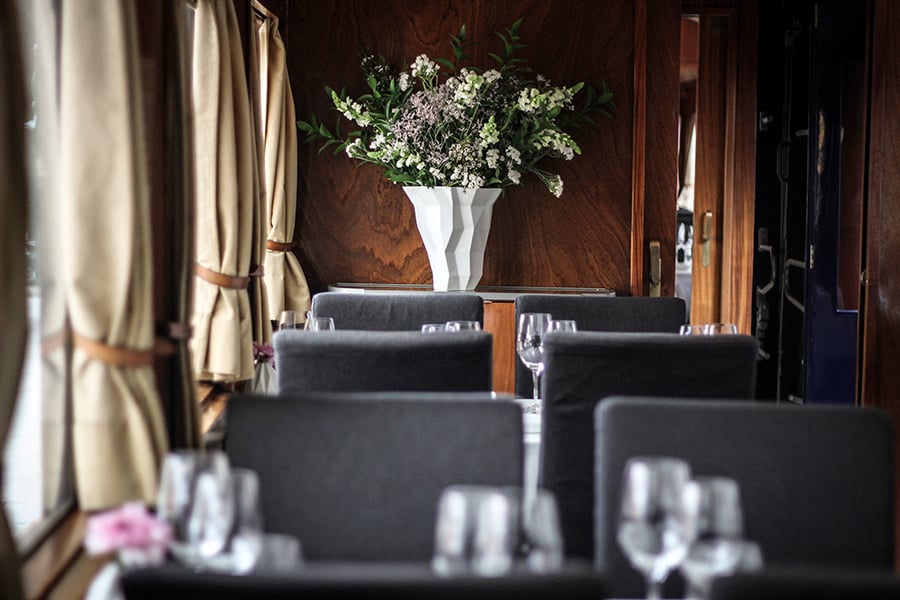 The crown jewel of the Portuguese Railway, The Presidential Train transported Kings, Presidents, Heads of State and Popes for more than a century. Built-in 1890, it served the Court of D. Luís I as its Royal Train, hosting aboard guests as reputable as Her Majesty Queen Elisabeth II and His Holiness Pope Paul VI. Rebranded as the “Presidential Train” in the turn of the century, it served the Heads of the nation of State until 1970, when it was officially retired from circulation. Exquisitely restored in 2010, it maintains its original furniture and charm and can be found on display at the National Railway Museum in Portugal.

The Presidential returns to the Douro Valley for its most exclusive edition ever and brings with it a selection of the very best Portuguese Chefs. Joining once again for a unique annual edition during the harvest season in what will be the penultimate edition of the project. The last edition, in September 2020, will have unforgettable features but also an extremely limited number of tickets available to the public, making this edition the last chance for most visitors. 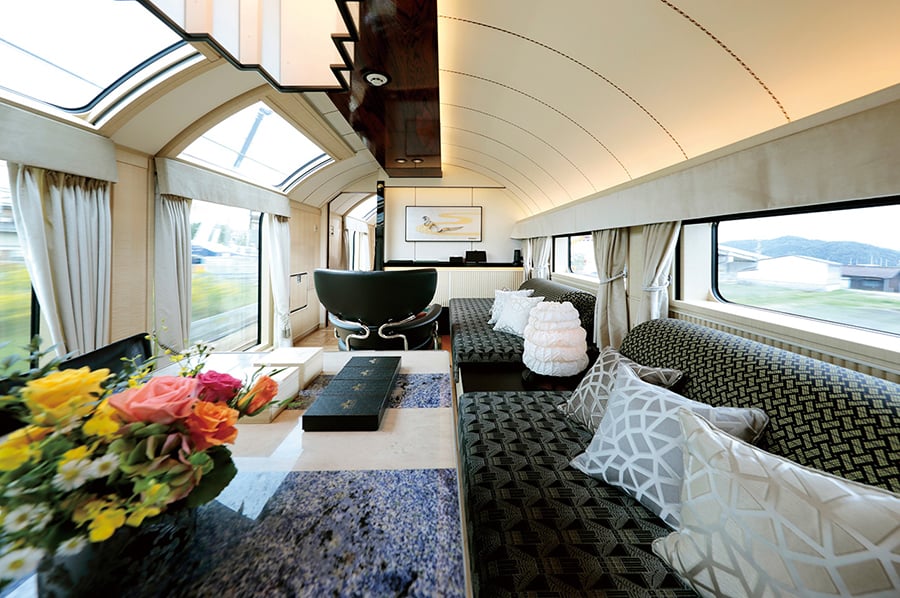 West Japan has a wealth of regions offering traditional and unspoiled Japanese landscape: the rich history and culture of Kyoto, Matsue, Izumo and Miyajima, and the beautiful scenery of the Sea of Japan, Mt. Daisen and the Seto inland sea islands. Discover the allure of Japan from the comfort of Twilight Express, with the superior quality of a hotel with breathtaking scenery, exquisite haute cuisine by top-class chefs, sophisticated cars and charming sights along the route.

The design concept is based on ‘superior quality with a touch of nostalgia’, with a nostalgic and modern design, creating an air of refinement and a relaxing, evocative atmosphere. The ‘Mizukaze Green’ exterior, inherited from the former Twilight Express, blends into the surrounding landscape, and is accentuated with a gold emblem and trim. The streamlined head car has an observation deck surrounded by five sweeping rails, complete with round headlights and a driver’s compartment reminiscent of locomotives from a bygone era.

The interior is inspired by Art Deco, a style popular in the 1920s and 1930s. The cars contain decorative touches from regions along the routes. The large windows give sweeping views of the spectacular flowing scenery. Relax next to an open window or step out onto the observation deck to feel the breeze.

Cuisine onboard Twilight Express include the wonders of Japan savored in the food served on Mizukaze. Planned by Takeshi Kadokami and overseen by top-class culinary artisans, dishes contain an extravagant variety of ingredients from along the route and are made on-board. 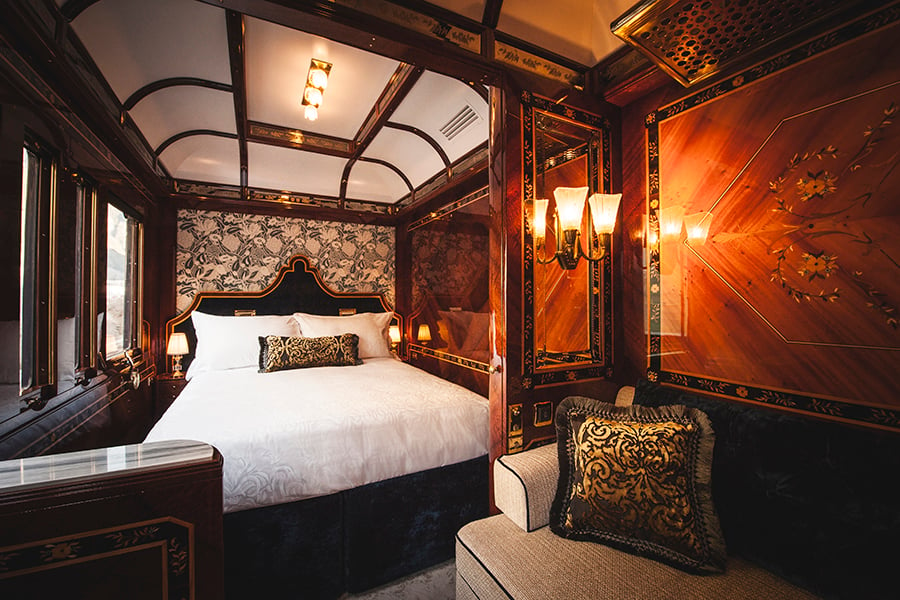 A 1920’s Art Deco icon, Venice Simplon-Orient-Express is nostalgic of the golden age of travel with its restored vintage carriages. Crisscrossing through Europe, it makes stops in major cities, including Paris, Venice, Prague, and Budapest. For a once-in-a-lifetime trip, couples can book one of the three Grand Suites. Each suite features private bathrooms with showers, double beds, and spacious living areas, the Art Deco accommodations bring the already elegant train experience to new, luxurious heights.

The Grand Suite experience will begin even before boarding, with private transfers to the train station where guests will then be greeted by their personal cabin steward. During journeys between London, Paris, and Venice – with an annual trip from Paris to Istanbul – Grand Suite guests will also enjoy free-flowing Champagne, private in-suite dining, and a complimentary art-deco bathrobe as a souvenir.

An additional three Grand Suites will be added with the 2020 season, named Vienna, Prague, and Budapest, the iconic cities the train travels to every year. The epitome of luxury, each Grand Suite has been created with scrupulous craftsmanship that embraces the train’s iconic history throughout. From the hand-embroidered cushions to intricately carved marquetry, the suites offer an unmatchable experience with perfectly placed mosaics, silk patterns, en-suite bathrooms, double beds and a private living area with underfloor heating.

The three new Grand Suites will bring the total number of suites onboard to six as they join Venice, Istanbul, and Paris, the existing winners of the ‘AHEAD: World’s Best Suite 2019’.