The Navy Rum and the Black Tot 50th Anniversary

Who forgot to celebrate or mourn Black Tot Day? July 31st was the 50th anniversary of what many have called “a barbaric act by the government.”

But you can still toast the memory of the tot with a new rum bottled in Scotland and blended in England, commemorating an important day in liquid history, which was also a very sad day for members of the Royal Navy. It also helps us splice the mainbrace properly.

“Elixir Distillers “Black Tot Rum” pays homage to the tot of rum ration given daily to crews of Royal Navy ships from 1655 to 1970.  In the early seventeenth century, beer replaced a pint of wine as the daily ration. But it spoilt easily. In 1784, James Man, a barrel maker and sugar broker from Billingsgate in London, was awarded the contract to supply the Royal Navy with rum.  The Man Group has grown into one of the world’s largest investment management businesses.  ED&F is an agricultural commodities merchant and still deals in molasses.”

Royal Navy rum had been imported from the West Indies since 1784. The original tot rum was sourced in the Caribbean ( Barbados, Jamaica, Trinidad, and Guyana ), shipped back to London’s Royal Docks where it was aged, blended, and then distributed to naval stations around the world.

The last tots were served on July 31st, 1970, now dubbed “Black Tot Day.”  Admiral Peter Hill-Norton abolished the 300-year-old tradition over health and safety concerns. In place of the rum ration, sailors were allowed to buy three one-half imperial pints (280 ml) cans of beer a day and improved recreational facilities. The order to “splice the mainbrace” can now only be given by the monarch and is still used to celebrate valiant service in the Royal Navy. Rum was given out at the 100th anniversary of the Canadian Royal Navy in 2010 and after the Queen’s Diamond Jubilee in 2012.

Splicing the mainbrace was one of the most hazardous jobs out at sea. Braces are the lines controlling the angle of yards. On square-rigged ships, it was the most important line.  The ship’s rigging was the prime target during battle. And repairs often and to be made with a run of hemp. The Able Seaman carrying out the work was given an extra ration of rum.

The rum leftover after six bells on Black Tot Day in 1970 was transferred into wicker-covered demijohns and stored in Thames-side warehouses, and only used for royal weddings. Sukhinder Singh of Elixir Distillers and the Whisky Exchange traced the rare, historic rum to Dartford and Deptford. It was bottled in 2011 as “Black Tot- The Last Consignment.” It retailed for £650 a bottle.

Sukinder Singh is co-founder of Speciality Drinks Ltd – the parent company to The Whisky Exchange and Elixir Distillers. He is an expert on whiskey and fine spirits and owns one of the best collections of old and rare whiskeys in the world. In 2018, he was awarded the coveted “Outstanding Achievement In The Scotch Whisky Industry” trophy and was invited to become a Master of the Quaich. The Keepers of the Quaich is an exclusive and international society that recognizes those that have shown outstanding commitment to the Scotch Whisky industry.

The Whisky Exchange is the world’s leading and oldest specialist online retail site for whiskeys and fine spirits.

From 1850 to 1970, the rum ration tot”, consisted of one-eighth of an imperial pint (71 ml) of rum at 95.5 proof (54.6%ABV); it was given out from the “Rum Tub” ( with the brass letters, “The Queen, God Bless Her”)  to every sailor at midday. Senior ratings (petty officers and above) received their rum neat, while for junior ratings, it was diluted with two parts of water to make three-eighths of an imperial pint (213 ml) of grog. 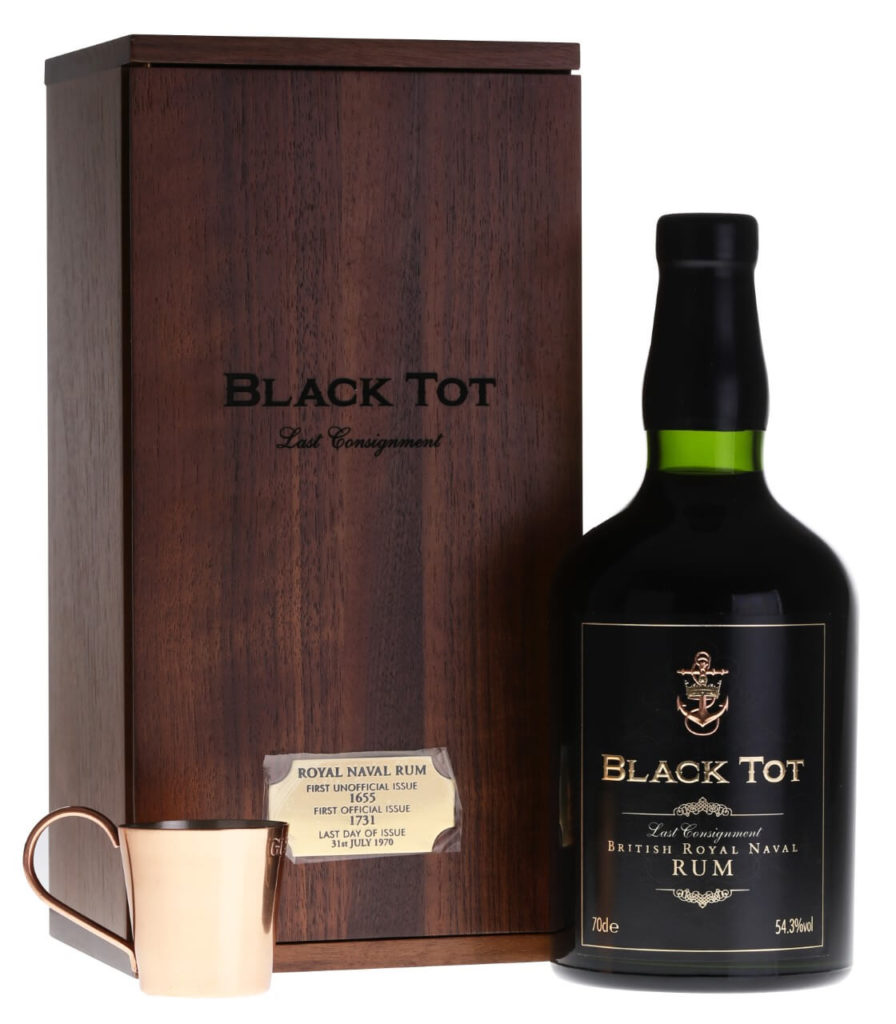 The practice of diluting rum in the proportion of half a pint to one quart of water (1:4) was first introduced in the 1740s by Admiral Edward Vernon, who was known as “Old Grog” because of his favorite grogram coat. Grogram is a coarse corded fabric made from silk, mohair, or wool.

In 1756 Navy regulations insisted small quantities of lemon or lime juice be added to the rum to prevent scurvy. The ration was cut in half in 1823 and again in half, to the traditional amount, in 1850.

Temperate sailors were given three pence a day instead. Officers did not receive a rum ration. The tot glasses were washed on the outside and never inside, in the belief that residue of past tots would stick to the side of the glass, making the drink stronger.  Sailors under 20 were not permitted a rum ration.

To prove its strength by sailors checked, gunpowder doused with rum would still burn. Verifying it was at least 57% ABV.

Elixir Distillers specializes in Scotch whiskey, Irish, American and Japanese whiskeys, which are exported to over twenty international markets.

Kevin Pilley
Previous article13 of The Best Cocktail Glasses for Your Home Bar
Next articleLaunched by Royal Collection, Buckingham Palace Gin is a Must Have