Over the past two years, Old Course Hotel, Golf Resort & Spa has undergone multi-million-pound renovation works, including the introduction of a penthouse, new guest rooms, and refurbished events spaces, as well as a new destination restaurant and bar, Swilcan Loft, which launched in early autumn 2021.

The hotel now boasts 175 rooms, with the introduction of a third floor in the ‘Champions Wing ’and the addition of 31 new rooms, overlooking the Old Course.

This five-star property in the heart of St Andrews (the birthplace of golf) offers breathtaking views of the Fife coastline. The hotel is set on a Championship 18-hole golf course – the Old Course, which is the oldest course in the world, and offers guests access to the championship Duke’s Course.

The chauffeur from the Hotel arrived promptly at 10 am and we proceeded on our journey from Glasgow to St Andrew’s, it was a pleasurable trip in the hotel’s luxury vehicle. Chris the concierge was delightful company and as much as I poked and prodded, he didn’t give up the names of the hotel’s famous guests. Well, it was worth a try. Upon arrival, we were whisked off to the Jigger Inn for a hearty pub lunch. This historic building dates back to the 1850s when it was the stationmaster’s lodge. Today, The Jigger Inn is home to golfing memorabilia, crackling open-hearth fires, home-cooked food, and a superb selection of Scottish beers. The Jigger is frequented by locals and guests of the hotel. It offers all the usual fare you would expect from a pub menu, fish and chips, sandwiches, soups, etc. The owner is on hand to serve the punters and the atmosphere is lively and loud. A great start to the St Andrews trip.

We had an afternoon of touring the town lined up with our superb guide Jan. What Jan doesn’t know about St Andrews you could stick on the back of a postage stamp. Despite having been to the town quite a few times, we had never taken a guided tour. We found it super interesting, and Jan made sure it wasn’t boring and just full of banal facts. She was lovely and we wouldn’t hesitate to recommend her services. 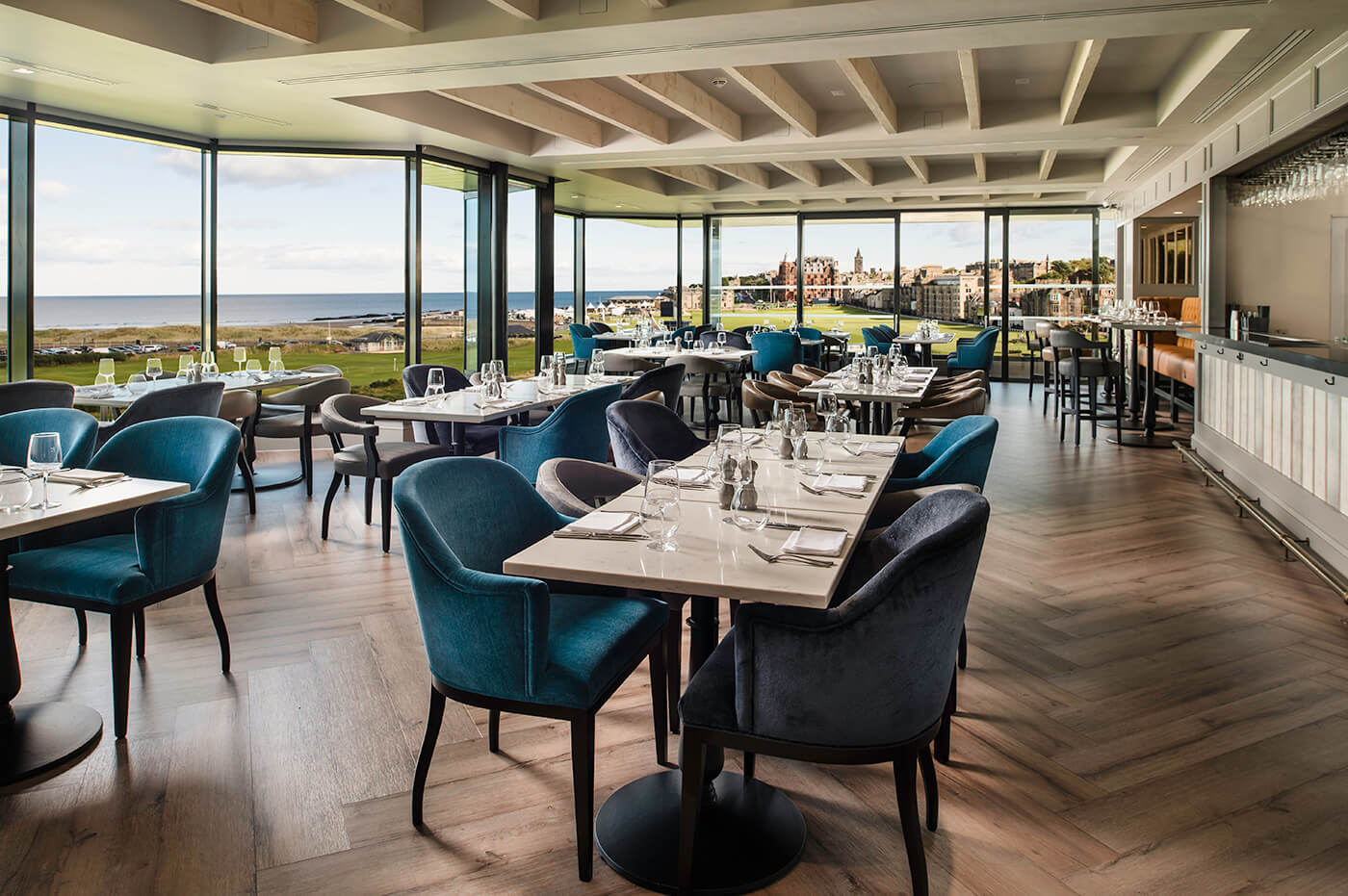 On our first evening at the hotel, we were booked into the hotel’s in-house restaurant. The interior is very minimalist and bright, I was glad the children weren’t with me, as it looked too pristine to have kids hanging about. The light fixtures and in particular the stunning chandelier are mesmerizing. And the food is incredible. Dinner focuses on the very best Scottish seafood and grills – oysters, lobsters, langoustines, scallops, and some fine Black Isle steaks, along with other wholesome favorites. The menu has a great selection of both starters, main courses, and desserts – all of which are of the highest quality. Being a massive seafood fan, I was in my element and the chef didn’t disappoint, from the starter of scallops to my main the whole lobster and even for the finish the carefully selected local Scottish cheeses, dinner was a truly memorable treat for the taste buds. The service and the food are top-notch, and we will be back without a doubt. 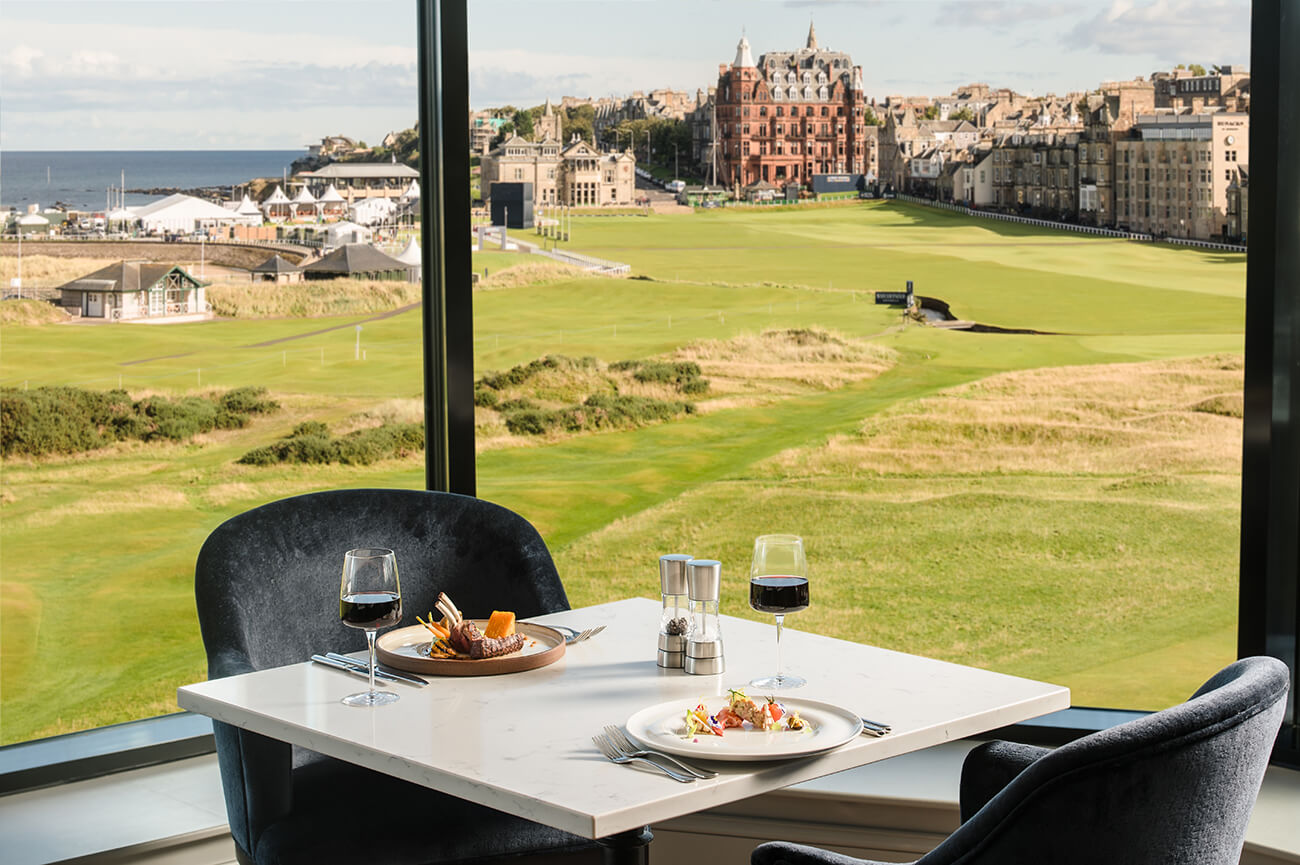 The hotel also manages The Hamilton Grand, which comprises 26 private residences and apartments of distinction with two, three, and four bedrooms ranging in size from 1,133 to 2,780 square feet. Due to the growing popularity of golf in the late 1800s, Thomas Hamilton realized a dream to create Scotland’s most luxurious hotel. He opened the 100-bedroomed Grand Hotel in 1895 – the first hotel in Scotland to have hot and cold running water in each bedroom, and the first with an elevator. The hotel was built on the site of the Union Parlous, the very first golfers’ club. When it opened its doors, it wooed and wowed visitors. Royalty, politicians, presidents, the earliest Hollywood stars, and many Open Champions all made their home at the Grand, from its opening, right the way through the first half of the twentieth century.

The property’s fortunes changed as it transitioned from a home for pilots during the Second World War and another conversion to student housing for the University of St Andrews. During the early 2000s, it fell into disrepair. Kohler Co. bought it in 2005 and began the refurbishment in 2009. Kohler Co. has sensitively restored this great building to its former grandeur, and we were lucky to have a wee nosy round. I had been eagerly anticipating seeing the yet-to-be-unveiled penthouse.

We were amongst the first to see the truly exquisite Penthouse; the views alone are to die for, and it is an opulent spacious grand apartment. Kohler Co has done a magnificent job of retaining the very best that Hamilton Grand had to offer and combining it with a new modern twist.

The building now boasts a reception hall and concierge, a private lounge for residents, and a roof terrace with breathtaking views over the Royal and Ancient Golf Club, the Old Course, and over the West Sands and out to sea.

Overlooking the 1st and 18th holes of the world-famous Old Course, the apartments in Hamilton Grand offer luxury living as well as the most desired address in the home of golf. Residing in Hamilton Grand provides many five-star services such as a 24-hour butler, spectacular sixth-floor rooftop deck access, complimentary access to the award-winning Kohler Waters Spa, and other dining and golfing privileges accessed via the Old Course Hotel, Golf Resort & Spa. 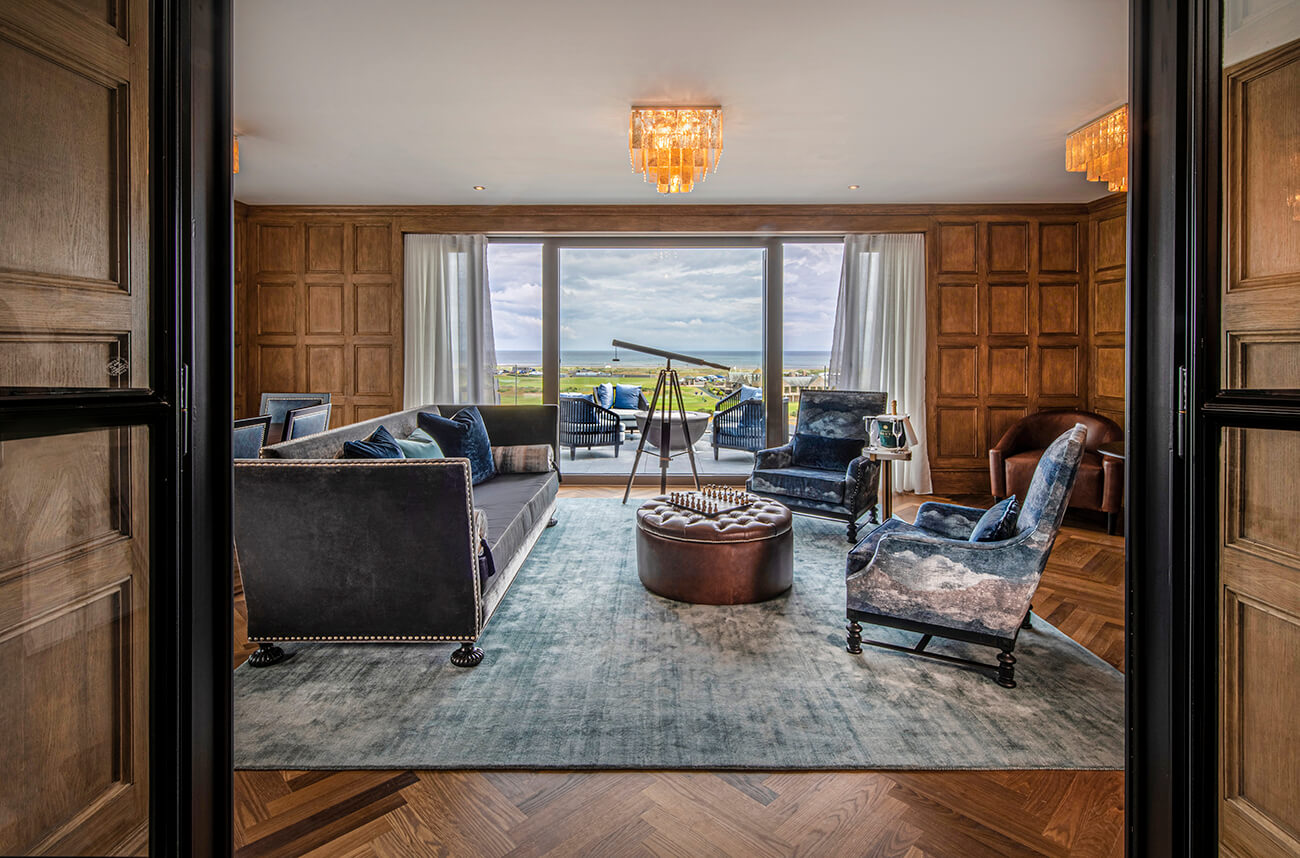 The two, three and four-bedroom private residences range from £1.3million to £7million – but golf enthusiasts will also get a membership to the Duke’s Course, a championship parkland course in the hills above St Andrews, which is owned by the Old Course Hotel, for an additional fee.

A 24-hour butler team provides the warmest Scottish hospitality during your time here and can help with golf tee times, and dinner bookings.

St. Andrews is an iconic destination and is one of Scotland’s most ancient towns dating from the 12th century to St Andrews Cathedral, which was the center of Christianity in Scotland for hundreds of years and a pilgrimage destination in medieval times. It is also home to Scotland’s oldest university, which is the third oldest in Britain, and a much-loved seaside resort with the award-winning West Sands beach. 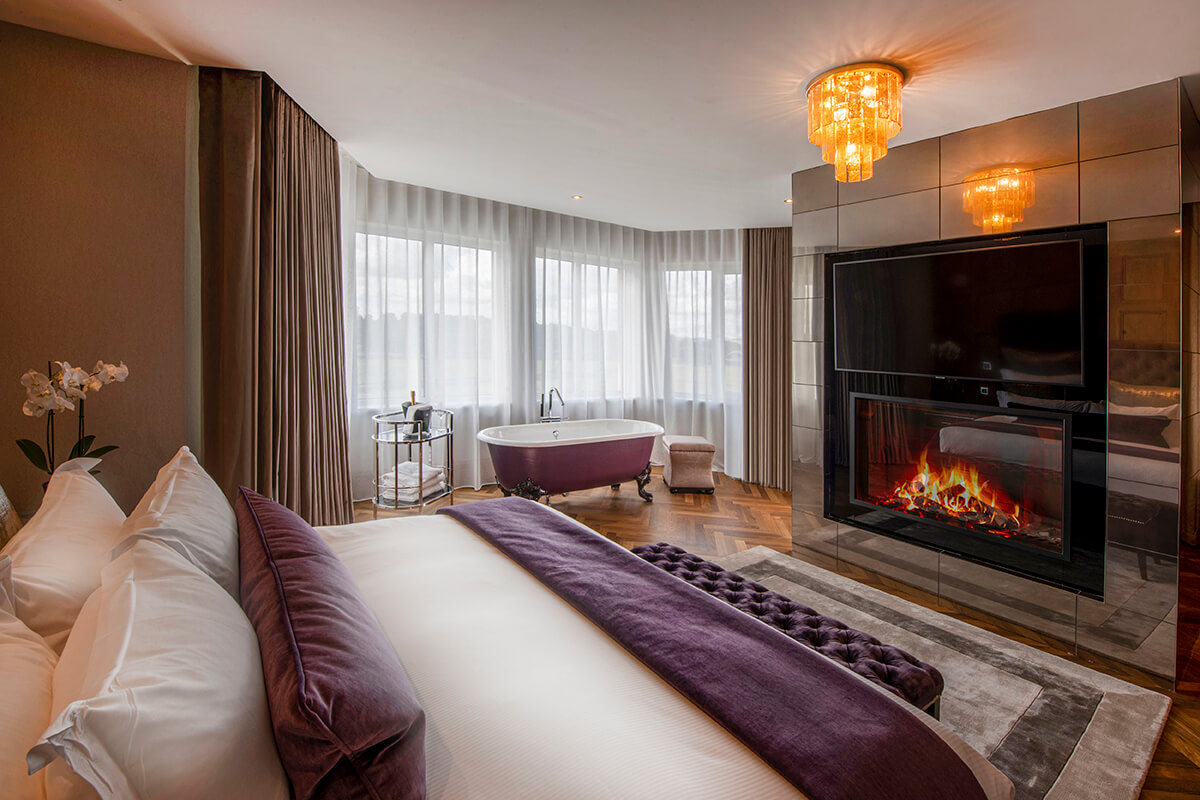 Often referred to as the “Mecca of Golf” to the great champions as it is to the mere devotee. A golf bucket list is not complete without the experience of St Andrews; after all, this is where golf began. There are more golf courses per person in Scotland than anywhere else in the world, and St Andrews is home to 11 in total – 7 of Championship class – a world-renowned golf academy, as well as The Royal and Ancient Golf Club that sets the rules of golf worldwide.

St Andrews is simply stunning, and we cannot wait to return, and no trip to St Andrew’s is complete without a stay at The Old Course Hotel, where your every need will be anticipated and catered for. 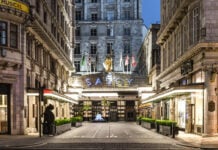 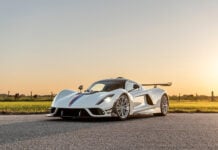 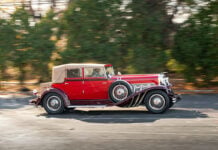