The Venetian: Intimacy within A High-Powered Luxury Resort

The Venetian: Intimacy within A High-Powered Luxury Resort

When the Venetian Resort Hotel Casino opened in 1999, it upped the standard within the decade-long trend toward luxury on the Las Vegas strip. Modeled after the historic city of Venice, the resort and convention center features a number of statement elements including architectural structures based on Venetian monuments, a canal with gondolas and a shopping center enclosed with a ceiling mural of a blue sky with white clouds.

More than 18 years later (an eternity in a town constantly reinventing itself) The Venetian has not only aged well but has grown to become the world’s second-largest hotel with the addition of a second tower (Venezia), a second resort-casino complex (The Palazzo) and the Sands Convention Center. 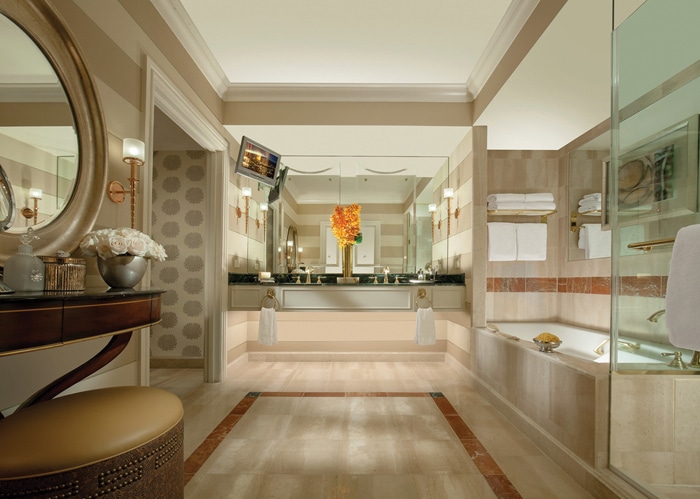 Las Vegas is one of the few places on earth where world-class luxury can be delivered on such a massive scale and The Venetian does it better than most. With no fewer than 10 pools; a world class spa; luxury retail; big-name restaurants, bars and nightclubs; and of course a spacious casino, the resort in many ways is similar to other properties along “The Strip.” However, few are able to do it while providing a high level of intimacy. It was the last point that most impressed me and my wife, Maria, during our four-night stay. 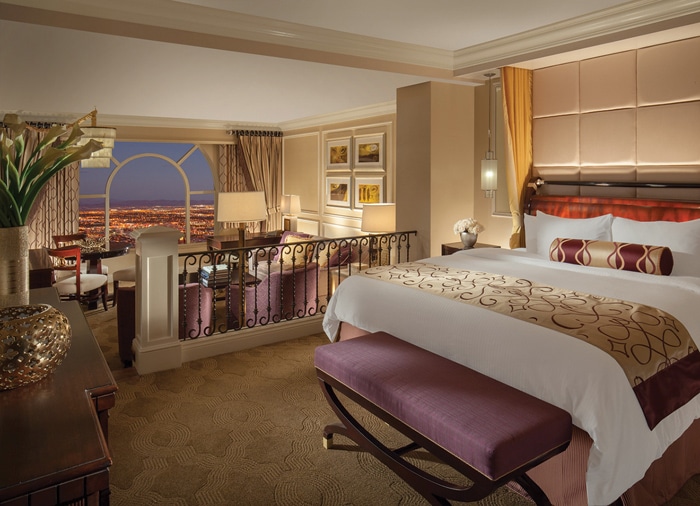 Our two-level, 650-square-foot Luxury Suite in the all-suite hotel had a king-sized bed that looked upon a sunk-in living room with a plush couch and chairs, a work desk and a dining table. It had partial views of the 10th-floor pool and the Las Vegas Strip, backed by desert and mountains. The marble bathroom featured twin sinks, separate shower and tub, and a water closet. There’s plenty of room for two people and their belongings where a couple could spend their entire vacation—but you would miss so much.

The dawn of the 21st century began a restaurant revolution in Las Vegas that is still going strong with resort casinos launching scores of high-profiled restaurants often attached with the names of celebrity chefs. Even with all of this competition the offerings at the Venetian are diverse and compelling, particularly the aptly named “Restaurant Row” that borders the casino. The restaurateurs who set up shop there include Wolfgang Puck, Mario Batali and Emeril Lagasse.

The newest restaurant, which opened in May, is a Latin-themed eatery called Chica, crafted by celebrity chef Lorena Garcia, who The Venetian says is the first Latina chef on The Strip. If that is indeed true it’s long overdue. The restaurant is founded by the creators of Yardbird, the popular Southern-style restaurant in Miami Beach with a branch in The Venetian.

The restaurant’s Latin theme is echoed with a neutral background from light wood-tones, handmade vintage tiles and colonial-styled wrought iron, accented with pops of color from large paintings, colorful crafts and colorful seat fabric. A two-sided bar centers the space. Its menu takes its inspiration from Mexico and several South American countries. It specializes in meat and ceviche. Two standouts are the crab and shrimp salpicon and the porchetta with crispy yucca hash. Porchetta isn’t Latino, you say. Who Cares? It is a spicy, slow cooked masterpiece. For dessert you can’t go wrong with churro fried ice cream pops or the lemon bunuelos with wild berry compote and white chocolate dulce de leche. 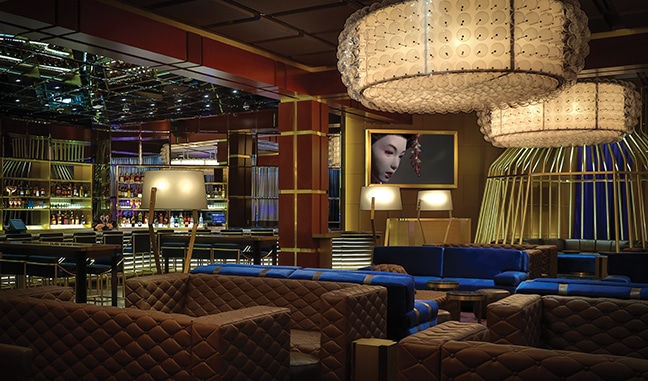 Cocktail culture is another area of renewed popularity and creativity not only in Las Vegas but throughout the world. The Dorsey provides an appropriate club-like atmosphere for fine drinking and a contrast to the bright lights of the casino floor that it borders. The signature cocktails are well thought out. For those who like a complex whiskey drink, there’s the “A La Louisiane” with rye, Benedictine, Italian vermouth, absinthe and bitters. For those with a preference for fruit and nut with their alcohol, there’s “Let’s Elope,” with gin, fresh melon, lime and orgeat.

If there’s any place in the world with the amount and variety of luxury retail as Las Vegas, I haven’t seen it. The most iconic international luxury brands have multiple locations throughout the strip. It’s nearly impossible to be unique or standout in such an environment. However, there are two retailers in the Palazzo that provide a special experience.

The first is Bellusso Jewelers, a long strip of watch and jewelry boutiques in the Palazzo Waterfall Atrium and Gardens. The store is owned by veteran luxury retailer, Ezra Bekhor of Owner, LV Luxury Holdings, and managed by Rick Moore. Brands at the store include A. Lange & Söhne, Bulgari and Harry Winston.

Its current prized possession is the Greubel Forsey Grande Sonnerie that is expected to arrive any day. The most complicated watch from the specialist watch brand, only five will be made this year. Two are slated for the U.S. but one was presold. This makes Bellusso Jewelers the only store in the country that will be selling the watch, with its estimated price tag of approximately $1.2 million.

The other retailer of note is nearby at the entrance to the Palazzo casino, The Atrium at the Palazzo, a 16,000-square-foot store with a more diverse offering of luxury goods—everything from a blue tooth speaker in the shape of a twin exhaust module to a luxury foosball table. If it reminds you of a luxurious duty free store there’s good reason. It’s owned and operated by the Hudson Group, the largest travel retailer in North America, with 330 specialty retail shops (mostly at airport and train stations) and more than 50 duty free stores. It’s the company’s first attempt at expanding its retail model in hotels. With its buying power and expertise, it is able to stock the luxury boutique with appropriate signature products. Brands include Burberry, Dior, Salvatore Ferragamo, Tumi, MAC and Tom Ford 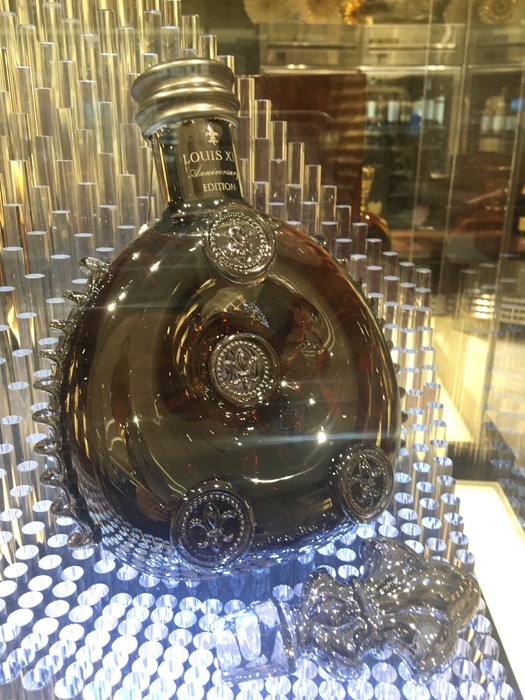 Like Bellusso, The Atrium also has a special watch in its stock: The Bovet Recital 18 The Shooting Star. The watch was created in 2016 in a limited edition of 50 pieces. This is the last one left in the world. It is an artistic and mechanical marvel with a five-day power reserve, tourbillon, jumping hours, retrograde minutes, hemispherical universal time and hemispherical double moon phase. It’s valued at more than $300,000. 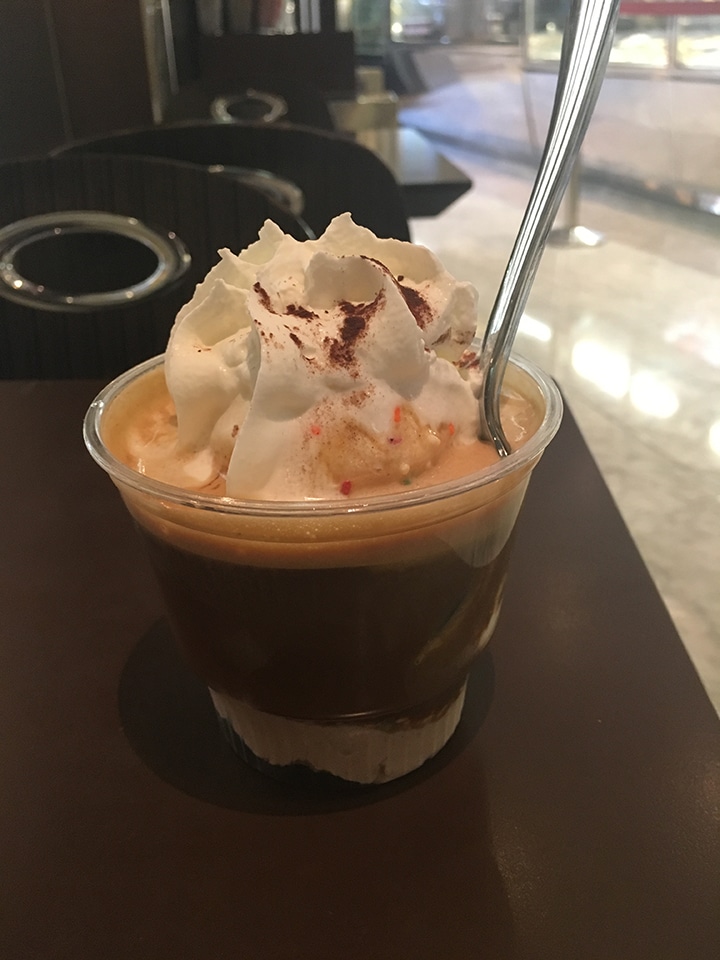 Morning meals are important and most people when on vacation or working away from home have a big breakfast. However, for those who prefer a simply latte, a quality crescent and a newspaper (if you still read print). The Café Presse fits the bill nicely. 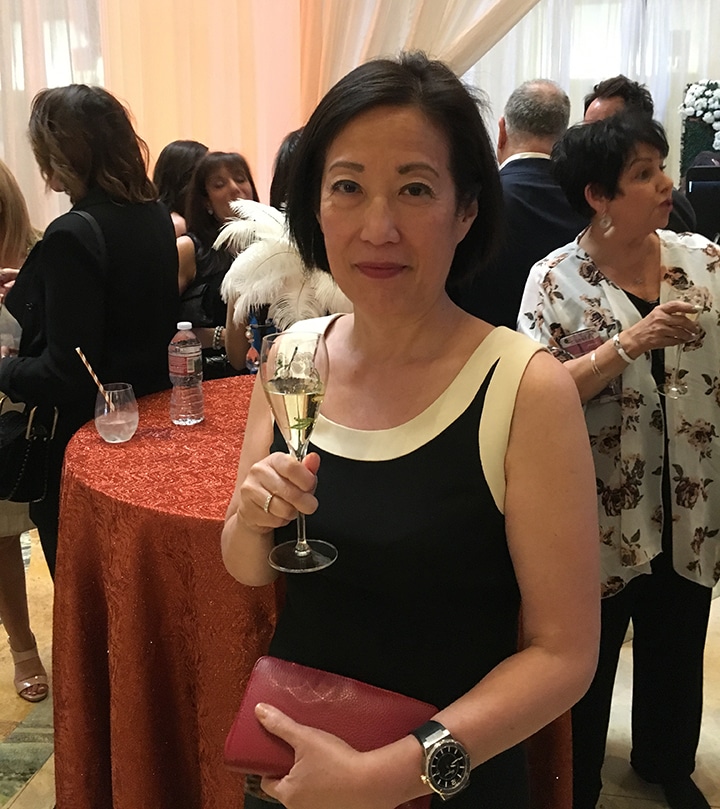 Conventions are big business in Las Vegas and the Sands Convention Center and the adjacent Congress Center ballrooms and meeting rooms. Totaling more than 2.2 million square feet, it is one of the biggest spaces in the city to hold events. Recently the Congress Center added the “Coworking Lounge,” powered by Internet shoe retailing giant, Zappos, headquartered in Las Vegas. The 1,170-square-foot space in the shape of a glass box with modular capabilities has WIFI access that could be arranged for conferences or individual use. The leather chairs and wooden workstations are furnished by Restoration Hardware and there’s a staff that schedules the space and provides support. 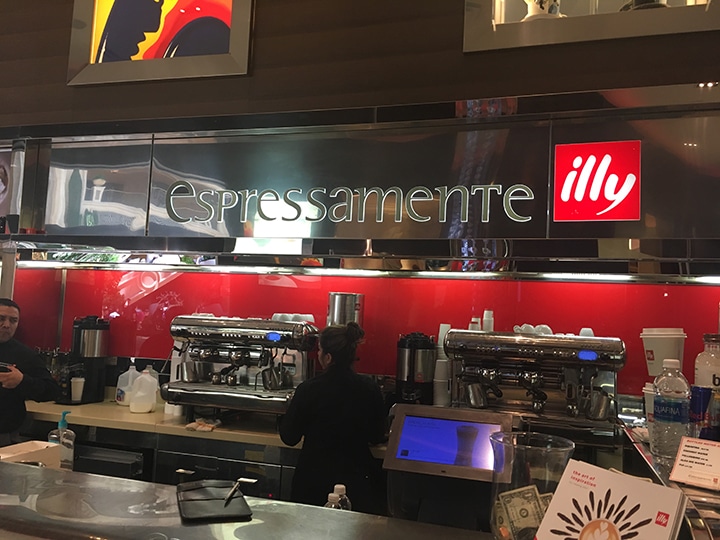 Before leaving The Venetian we were in the mood for ice cream and decided to go to Espressamente Illy, a coffee and gelato bar in the Palazzo Atrium owned by the Illy Italian coffee company. We were happily surprised that the menu included the Affrogato, a wonderful Italian espresso and ice cream drink and were even happier when we discovered it was a mighty fine version. Topped with whipped cream it provided the perfect end to our stay. 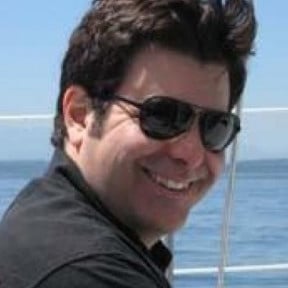 Anthony DeMarcohttps://jewelrynewsnetwork.blogspot.com/
Anthony DeMarco is a freelance writer and editor who travels the world covering the jewelry and watch industry. He is also a lifestyle correspondent and “resident jewelry expert” for Forbes.com, and covers the U.S. jewelry market for JewelryNetAsia, a Hong Kong-based Web portal, as well as contributes to the Financial Times Watches & Jewellery special reports.
Previous articleBreeder’s Cup 2017 Preview & Contenders
Next articleKobi Karp, Designing Genius

Established in 2005 by record-breaking polar explorer duo Patrick and Robyn Woodhead, White Desert Antarctica has since pioneered luxury travel to Antarctica. The company is the...