The Icelanders look after their gods.  Vali the Norse god of revenge, Magni the son of Thor and god of strength, and Baldur, the god of beauty all now enjoy protected status. As do goddesses like Dagny Gefnur and Freya, goddesses of love, beauty, and health.

A garment that has protected humans for centuries is now protected by human law. The traditional Icelandic sweater-. Íslenska Lopapeysan- is now a product name protected by the country’s food and veterinary authority. This means that an authentic Icelandic sweater must be made from wool sheared from Icelandic sheep, the wool must be new/virgin and not recycled and it must be hand-knit in Iceland.

“The lopapeysa isn’t just a relic from Iceland’s past — it’s still a staple wardrobe item,”  says Orri Hermannsson of the family-run Icelandic Store.

“Knitting is taught in schools. Many Icelandic people knit their own sweaters, including some men. Although this is still a primarily female pastime, nobody lets prejudices or stereotypes get in the way when it comes to enjoying the traditional hobby.

For a skilled knitter, it will take some 18-25 hours of knitting to make a quality knit sweater. Thus the price tag. Some cost over $400. The Icelandic Store only sells sweaters made by Icelanders. “Nothing leaves the store without the approval of our senior knitter, Bryndís Eríksdóttir.”

The first immigrants from Norway brought sheep to Iceland. The craft of knitting is mentioned in the first Icelandic Bible, printed in 1584. Knitted clothes have even been used as a means of trade since 1582. A pair of sixteenth-century mittens were found during archaeological excavations in Storaborg in southern Iceland.

Knitting is believed to have migrated from England, the Netherlands, and Germany at the turn of the sixteenth century. Archaeological excavations have also uncovered evidence of Icelandic knitwear in other parts of Europe. A pair of mittens knitted in Iceland around 1700 were discovered in Copenhagen, Denmark. Icelandic students learn to knit at school as part of their crafts education.

The main difference between Icelandic and Norwegian knitwear is that Norwegian sweaters are often blue white and red, the pattern is usually a star (sometimes resembling more a flower), and often has dots on the torso.

Wool processing has been a trade in Mosfellsbaer since 1896, previously with the company Álafoss of Iceland until  Ístex took over in 1991. Istex buys wool directly from farmers in Iceland and processes it into yarns. It is Iceland’s main wool producer, producing seven yarns and a knitting pattern book. Yan colors range from Frostbite and Glacier Blue to  Milky Way, Rough Sea, and Black Sheep. 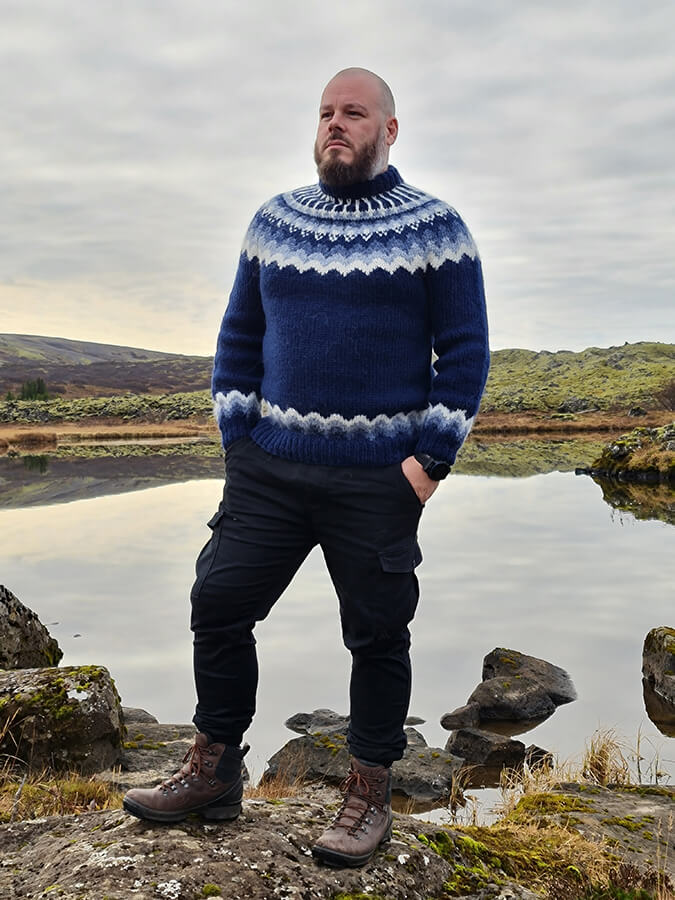 Iceland’s knitwear industry benefitted from its independence from Denmark in 1944. The Lopapeysa was introduced as a new Icelandic tradition and symbol of national identity. There are several theories about the origin of the patterns, one of them points to Auður Laxness, the wife of Iceland’s Nobel Laureate in Literature, Halldor Laxness; she was said to be inspired by the design of Inca culture that she saw in a book brough back fromhis travels.

Norwegian patterns were based on the Greenlandic nuilarmiut, traditional formal wear with a beaded collar that covers the shoulders and bust and has brightly patterned geometric designs. Although the origin of the yoke pattern cannot be traced, Icelandic yokes (sometimes with matching cuffs and waist) feature nationalistic symbols like flowers, leaves, snowflakes, and horses.

Wool and horse hides soaked in fish oil were the only materials the Icelandic folk had to protect them against whatever the weather threw at them… “Afréttur,” means common grazing land owned by local farmers. 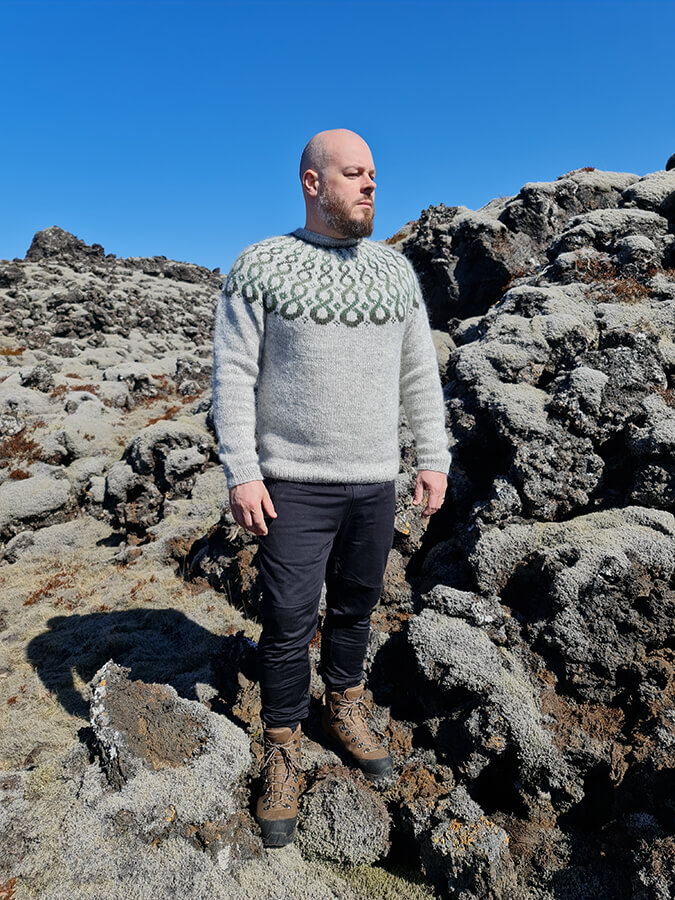 Icelandic wool is characterized by the two parts of the fleece: the “tog”, which is similar to guard hair, and “þel”, a type of down hair. The þel is closer to the skin, the hairs are soft, fine, short, and springy. The tog is the outer part of the fleece and is made up of long, coarse, and shiny hairs. The þel is airy and provides good insulation but the tog is water and moisture-repellent. When wool work became a factory industry in the late 19th century, combing and spinning were done by machines. The machines couldn’t separate the þel from the tog so the Icelandic “Lopi” or sliver we know today is a mixture of þel and tog.

The Icelandic “vistarband”, a form of serfdom, was abolished around 1900. As a result, laborers moved from rural areas to towns looking for new opportunities and many men went to sea. This greatly increased the demand for comfortable work sweaters that could be made quickly. Faroese sailor sweaters were very popular advertised goods in Iceland around 1900.

The sailor sweater was the wool sweater’s predecessor. Patterns differed from one country to the next and sometimes even from one crew to the next but they were usually black on a white background. For a long time, the patterns on the foreign sailor sweaters were related to Christian symbols like crosses and stars and were possibly meant for protection. The Icelandic sailor sweaters didn’t have a pattern. The black-and-white appearance was achieved by mixing two or three colors together which created a kind of speckled appearance. 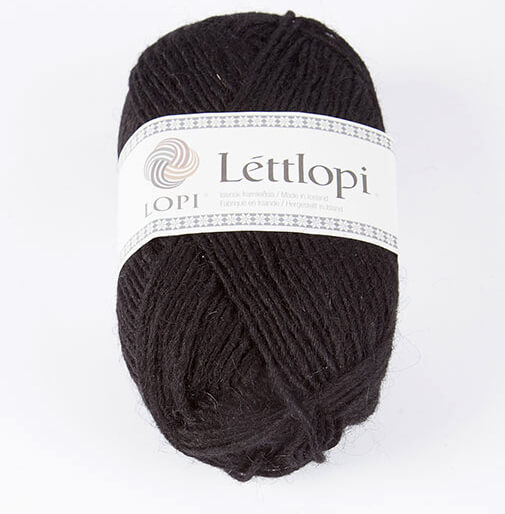 Icewear is cool and has been no for fifty years. The Icewear knitwear company started as a knitting studio in Hvammstangi in north Iceland in 1972 and is now championing a new era of keeping warm under its original slogan, “Be warm, be well,”

Says Icewear owner Ágúst Thor Eiríksson. “We feel incredibly lucky to work with the woolen fiber of our Icelandic sheep. I am personally fascinated by these hardy creatures whose existence in our harsh environment has led to the remarkable composition of their wool. It is the perfect fiber – breathable, lightweight, water-repellent, and of course natural. Our sweaters are all designed in Iceland but not knitted here.

“Knitwear is a great example of how Icelandic cultural expression combines with contemporary style and function, exemplifying the spirit of self-sufficiency that defines Icelandic people.”

How to Style a Hooded Leather Jacket to Rock the Street Casual Look?

The leather jacket with a hood is a timeless piece of apparel that owns a charm of its own. When it comes to comfort...